May 25, 2018 • 7 tweets • 2 min read
I think 98% of "REVERSE RACISM!!" yawping is BS, including a lot of affirmative action complaints, but this will never be true no matter how shamelessly people try to redefine the common and obvious meaning of 'racism,' and it's disgraceful to argue otherwise. Bigotry is bigotry.

The minute someone starts making a "well *my* bigotry is acceptable and not really racism because teh power structure" argument, then you have entered the world of what is known as "special pleading," and special pleading always merits hard scrutiny (and, usually, contempt).
And listen: the reason I normally do not engage in this arena on Twitter is precisely because I think that, despite sometimes getting behind the wrong avatars, the #BLM movement has a core, deeply powerful and socially important point. Which extends beyond mere police shootings.
Black lives matter not just when they're extinguished. They matter when they're sentenced to prison wildly disproportionately and their lives are destroyed and toyed with by a state power which bears (yes it's true) marks of institutional racism: nashvillepublicradio.org/post/he-heads-…
All of this is true. And yet.

Don't BS me by pulling a social-power move and reversing polarities by saying now that racism can only go one way (functionally, forever). Don't piss on my leg and tell me it's raining. I will not allow ppl to steal that rhetorical ground.
Typical response from jagoffs on other side when someone makes this point is "the lady doth protest too much" or some variety thereof. But they know the game they're up to. Public discourse is about claiming ground. I really just don't care about anything save what is true.
With all that said, I will return to relatively noncontroversial tweets about 1980s synth-pop bands.

Keep Current with Jeff B. tried to do his best, but he could not

@EsotericCD
Sep 8, 2018
REQUEST FOR PROPOSALS: Name a guitar solo from a song that genuinely moved you -- maybe to tears, maybe to jump around the room, let's leave it open because people react to music differently.

I'll start with an obvious one: Neil Young's two majestic turns through "Powderfinger."
There are so, so many great answers in the responses but this is one I had to highlight. This is one of the greatest, most sprightly yet emotionally intense guitar solos in all of art-rock:

This song is three minutes long. Please listen to all of it. When Robert Fripp's guitar solo comes in, you'll understand why it's so intensely beloved.
Read 8 tweets

@EsotericCD
Aug 15, 2018
One thing I think we may discover about November is that Latino turnout isn't surging the way a lot of people expect it to. Similar trends in Valadao's and Hurd's districts.

It's educated whites that are going to wipe out the GOP in 2018, not minorities.

I'm getting a lot of "LOL what GOP wipeout?" comments in the responses here. Normally I ignore that, but let's assume it's not blind partisanship; it's worth explaining something fairly clear to election analysts but perhaps not so much to folks who don't obsess over this stuff.
First, when I say that a GOP wipeout is in the cards for November, I am referring obviously to the House and not the Senate. In the Senate I expect the GOP to lose AZ/NV but to make it back in MO and ND, and possibly IN and FL as well (MT, OH and WV are agonizing misses...).
Read 9 tweets

@EsotericCD
Aug 1, 2018
A thousand different possible answers, but if you want an easy way in, start with Miles Davis' KIND OF BLUE and IN A SILENT WAY, then Coltrane's CRESCENT (A LOVE SUPREME is not a starter LP), and for something different try Eric Dolphy's OUT TO LUNCH.

I will say that, though it is extremely uncharacteristic (both as jazz and as a Miles LP), IN A SILENT WAY has been my 'gateway drug' of choice for tons of people. Nothing else sounds quite like it, and it's basically impossible not to like.
BITCHES BREW is a trap of sorts -- hugely influential, yes, and a great record, but also deeply weird and disconcerting if your only prior reference point is rock or even mere trad jazz/bebop. Also, it's flawed: the title track is a bore and "Sanctuary" is...not good.
Read 4 tweets

@EsotericCD
Jan 10, 2018
More to the point of this, it's remarkable to see just how cynically gerrymandered Maryland is (far worse than NC, though Dems are curiously unwilling to grant this). Let's look at some maps, because maps are fun.

From 1992 to 2002, this was Maryland's congressional map. It's not a bad map. Sure, MD-3 (Ben Cardin at the time) is a bit awkward looking, but for a state as oddly shaped as MD, it's a sane map w/sensible communities of interest. 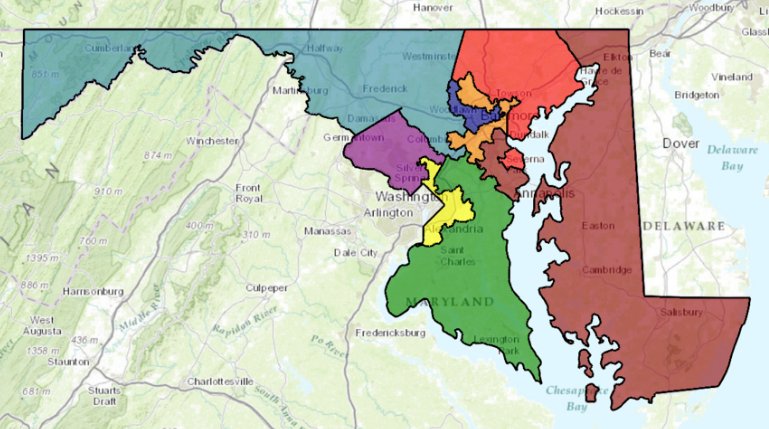 This map elected FOUR Republicans (Bartlett, Morella, Gilchrist, Ehrlich) to Congress, hard as that may be to believe nowadays. It would have been three, but Connie Morella was a wizard at holding the very Dem MD-8 (back then, a pure Montgomery County CD).
Read 15 tweets

[*sound of pebbles being shaken loose from mountainside*]

"Hey pa! You hear that? Storm's a-comin'!"
"Son, that ain't just any storm. That there's a TWEETstorm. Go get yer mama out from the fields & tell her it's time for some Game Theory."
Have finally submitted my op-Ed/review on Arcade Fire's new LP EVERYTHING NOW (short version: it's good).