Aug 5, 2018 • 12 tweets • 12 min read
I've absolutely had it with this 24/7 #antisemitism news cycle, which is being weaponised by elements of the Labour party and the mainstream press to undermine the Labour party and its leadership... #TomWatson
If you haven't heard @MikeSegalov on anti-semitism yet, his interviews for the #BBC and Momentum are well worth a listen

As Segalov makes clear, its right to say there are legitimate concerns regarding anti-semitism both across society & within Labour. A fringe element within Labour & most political parties = anti semitic. Also fair to say #antisemitism is being weaponised

Its worth comparing how the British media, and reactionary politicians they orchestrate responded when evidence of very serious allegations of undue Israeli Govt influence over @UKLabour emerged, via an u/cover @AlJazeera sting in #TheLobby aljazeera.com/news/2017/01/l… #antisemitism
In early 2017, @AlJazeera found clandestine operations co-ordinated from the Israeli embassy to undermine @BDSmovement in the UK and Labour party MPs & campaigners who supported it... aljazeera.com/news/2017/01/l… #antisemitism
Evidence, filmed on camera, of Israeli diplomats, operating out of a London embassy, plotting to use #antisemitism as a weapon to damage and bring down @jeremycorbyn & create a schism with his key supporters in @UKLabour aljazeera.com/news/2017/01/l…
As deputy leader of @UKLabour with a responsibility to defend the Corbyn leadership, what was @tom_watson's response when evidence of an Israeli plot to use #antisemitism as a political weapon to destroy Corbyn & pro BDS MPs became public..?
.@tom_watson, a member of Labour Friends of Israel @_LFI repeated the nonsense peddled by @MarkRegev that @BDSmovement is "morally wrong" despite targeting goods produced in ILLEGALLY OCCUPIED Israeli settlements independent.co.uk/news/uk/politi… #antisemitism
Time and time again, @tom_watson has failed to defend @jeremycorbyn - even whilst being attacked by a pro-apartheid regime, in breach of international law, right here on UK soil in a blatant act of political subversion aljazeera.com/investigations… #antisemitism
As for the #BBC, given well publicised attempts to publicise *claimed* Russian interference in UK politics, you would assume @maitlis and @bbclaurak would be all over *EVIDENCE* that #Israel plotted to bring down Govt ministers & the #Labour opposition... aljazeera.com/investigations…
Here's how the #BBC covered one of the most blatant acts of political subversion by a foreign state (#Israel) actor on UK soil in recent years aljazeera.com/investigations… #antisemitism

Why would the #BBC treat subversion of UK democracy by Israel (ignored completely) to Russia? (spun constantly & amplified). Could it be that the UK military industrial complex sell hundreds of £millions of arms to #Israel? middleeasteye.net/news/exclusive… #antisemitism

@Gian_TCatt
Dec 30, 2017
1. The following is a thread on Brexit, #bluepassports and 'fake news'
2. The whole black/ #bluepassport thing = so farcical. Did my best to avoid the subject, until PM's spin doctor @RobbieGibb started tweeting about ‘fake news’ harming democracy 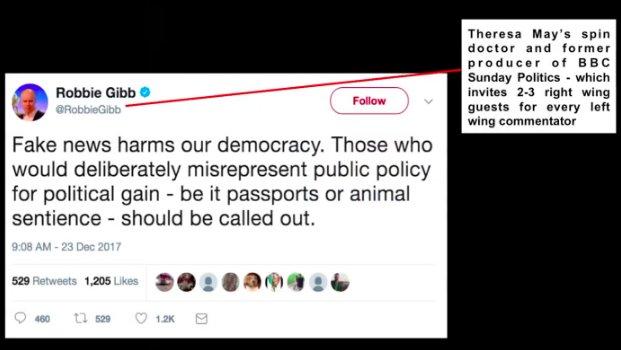