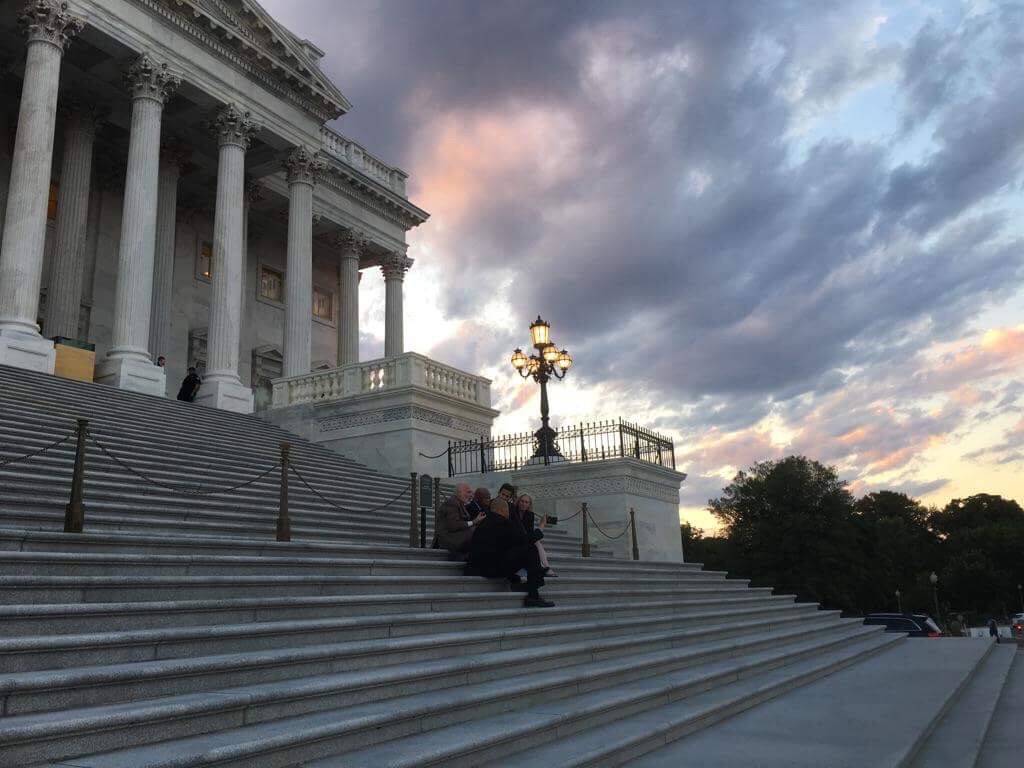 2. Those two guys on the Capitol steps: NJ Sen @CoryBooker and civil rights hero @repjohnlewis. Another shot of the beginning: 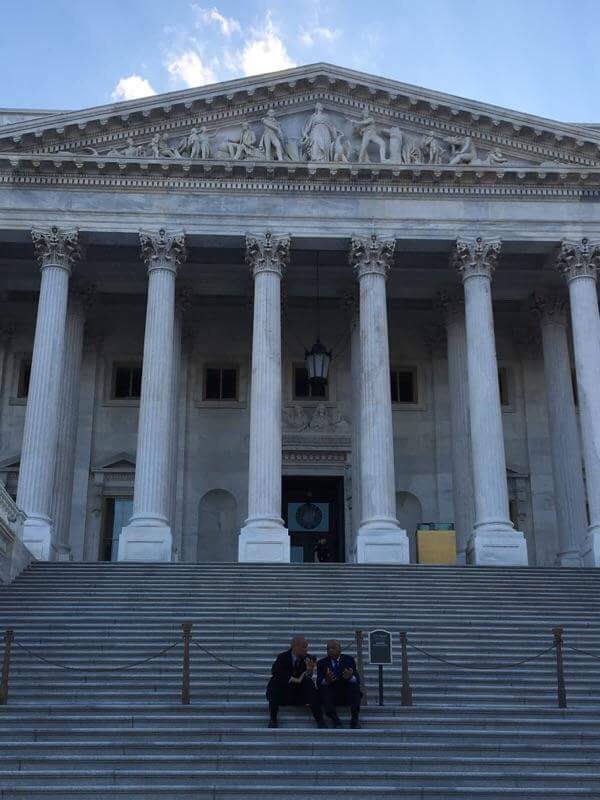 3. Booker and Lewis started a Facebook Live to talk about Trumpcare and what this moment means for America.
4. I didn't know that it was happening when I walked up to the Capitol. I work with @MoveOn and was there for something else. Snapped this.

5. When I took that picture, I was going to tweet: "something vile is brewing in that building. #Trumpcare." But I got a text—
6. The person I was trying to meet up with told me he was on the East Capitol steps on the Senate side. I found him, and saw this: 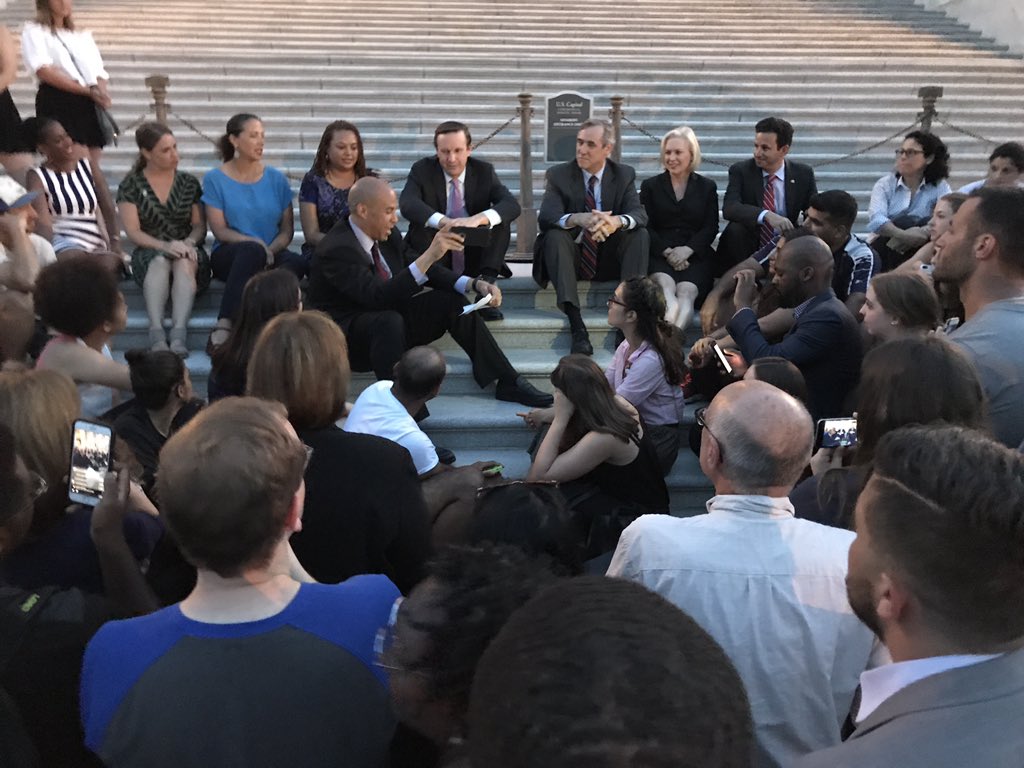 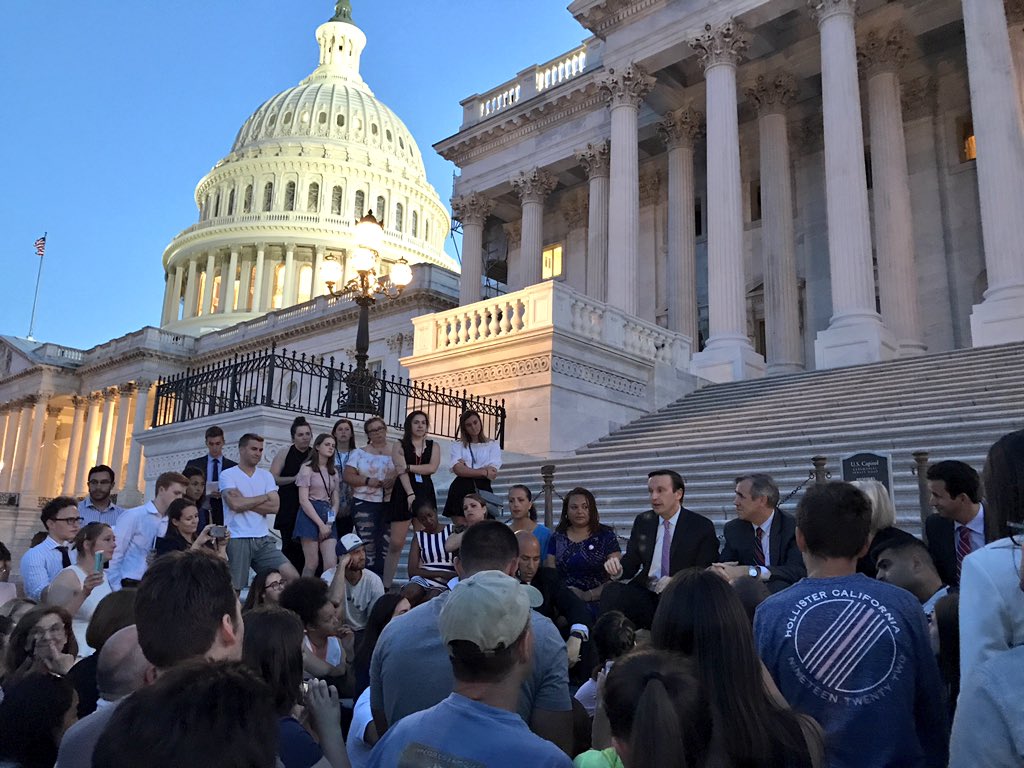 8. Maybe 20 people were sitting around them. They were telling stories about health care, laughing, answering questions. Felt like a picnic.
9. I sat down. Realized I was sitting on the jacket of @SenBobCasey, who I realized was sitting next to me. Oops! Hi! Wow! Is this real?
10. Totally real. Organic, spontaneous. Senators kept drifting out. Passers-by kept wandering over and sitting down.
11. This, I thought, must be what democracy is like in very tiny countries, or Ancient Greece. Senators & citizens kibbitzing about issues.
12 The funniest thing to me was seeing people you normally see on TV passing @CoryBooker's phone back and forth to shoot video. @SenSchumer! 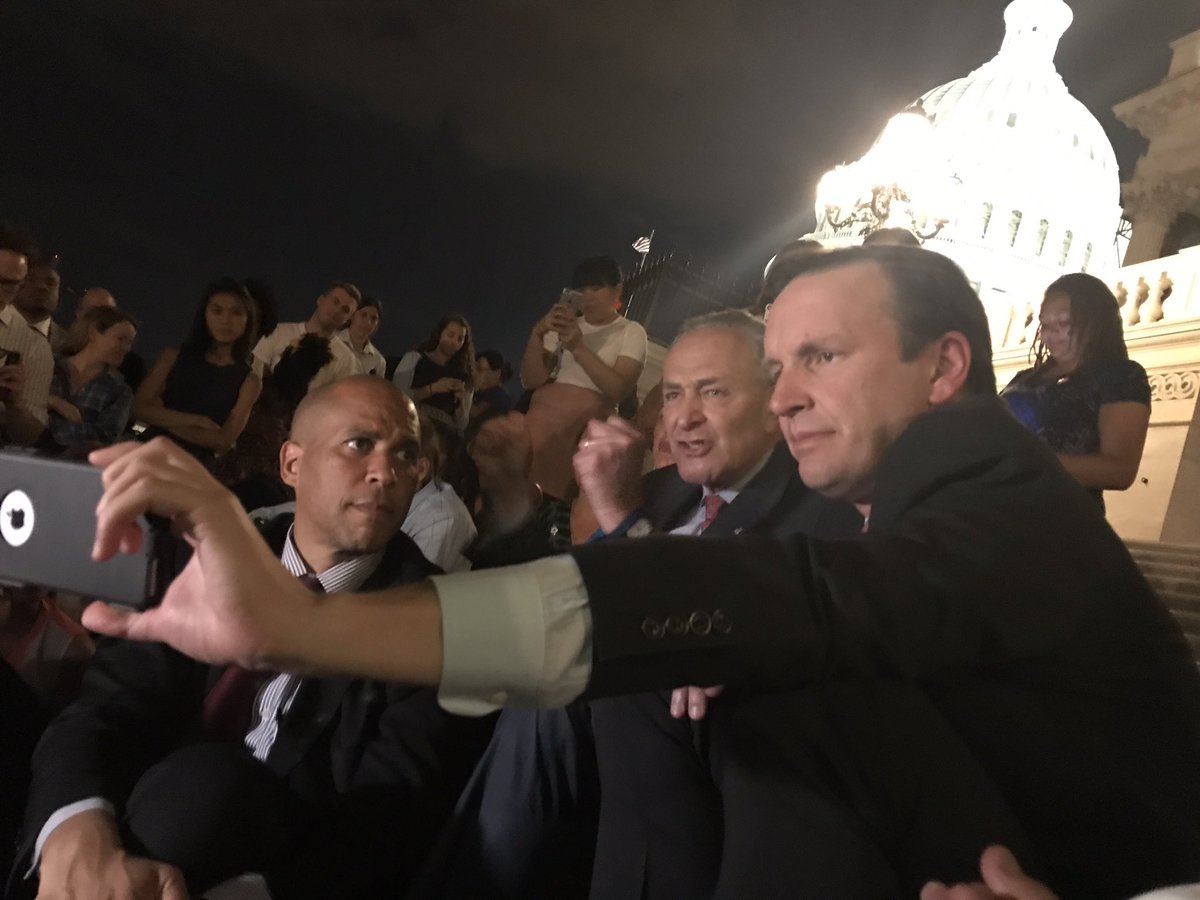 13. And then @CoryBooker asked me to speak. And he said, stand up so the crowd can hear you!

And I realized it had grown.

A lot.
14. Suddenly everyone was on their feet—and roaring. Hundreds of people. There spontaneously. Ready to fight for health care.
15. It was hard to get a shot of thr while crowd, but here's a piece of it. That's @ChrisMurphyCT holding the phone, videoing @CoryBooker. 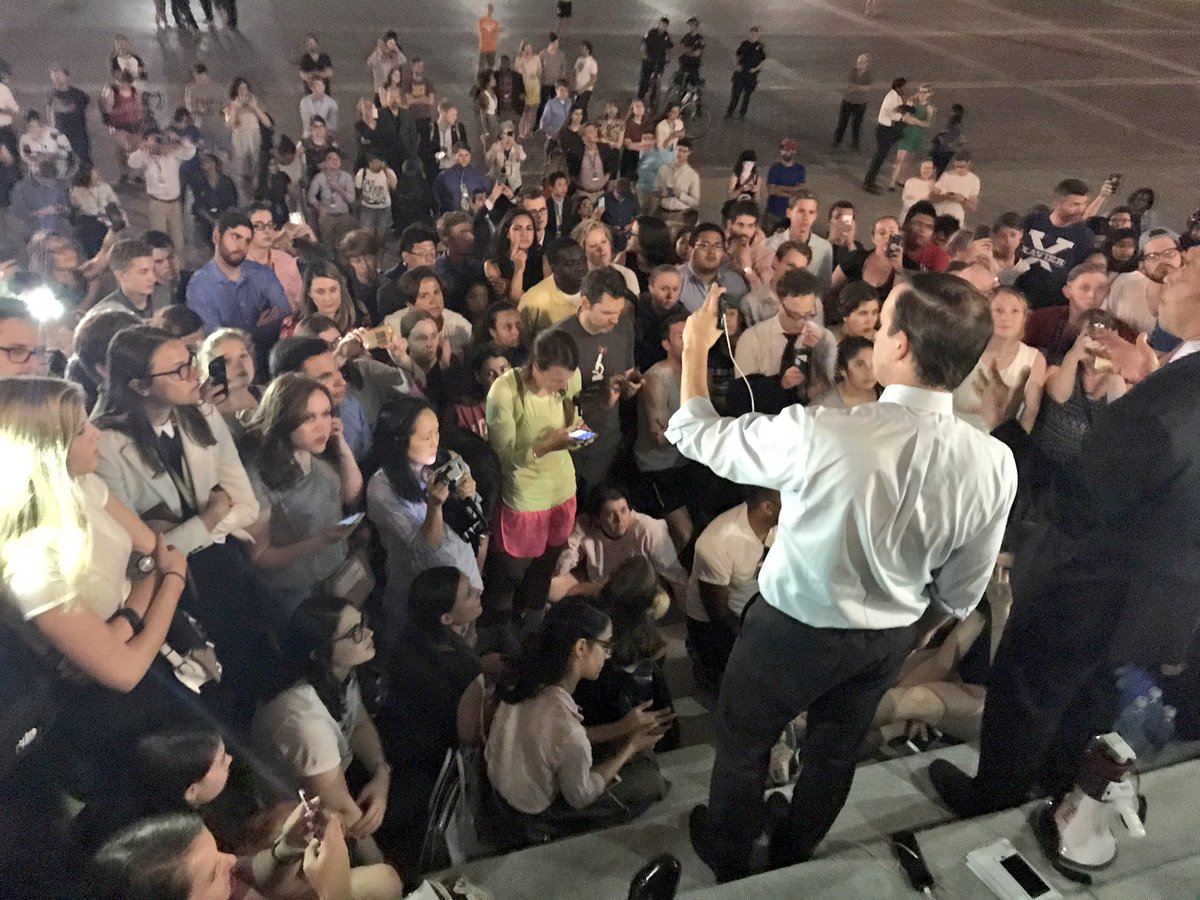 16. This was a rally now. Part of my job is speaking at rallies. Some are great. Some are fine. This one? Everyone was *on fire.*
17. A bunch of groups have been planning a People's Filibuster—three days of Capitol protests to stop Trumpcare, starting 2pm tomorrow.
18. The People's Filibuster started early.
19. People told their stories. A refugee diagnosed with cancer weeks before her graduation, alive now thanks to Medicaid.
20. A child of immigrants, born with a rare disease, now healthy and an organizer fighting for justice for all—preexisting conditions or no.
21. People asked how they could fight. We shared ways to do it. Come protest at the Capitol this week. Protest at local offices. Make calls.
22. @CoryBooker's phone was running out of juice. I had a battery! Very proud that that's my iPhone cable in the photo. Keep it going! 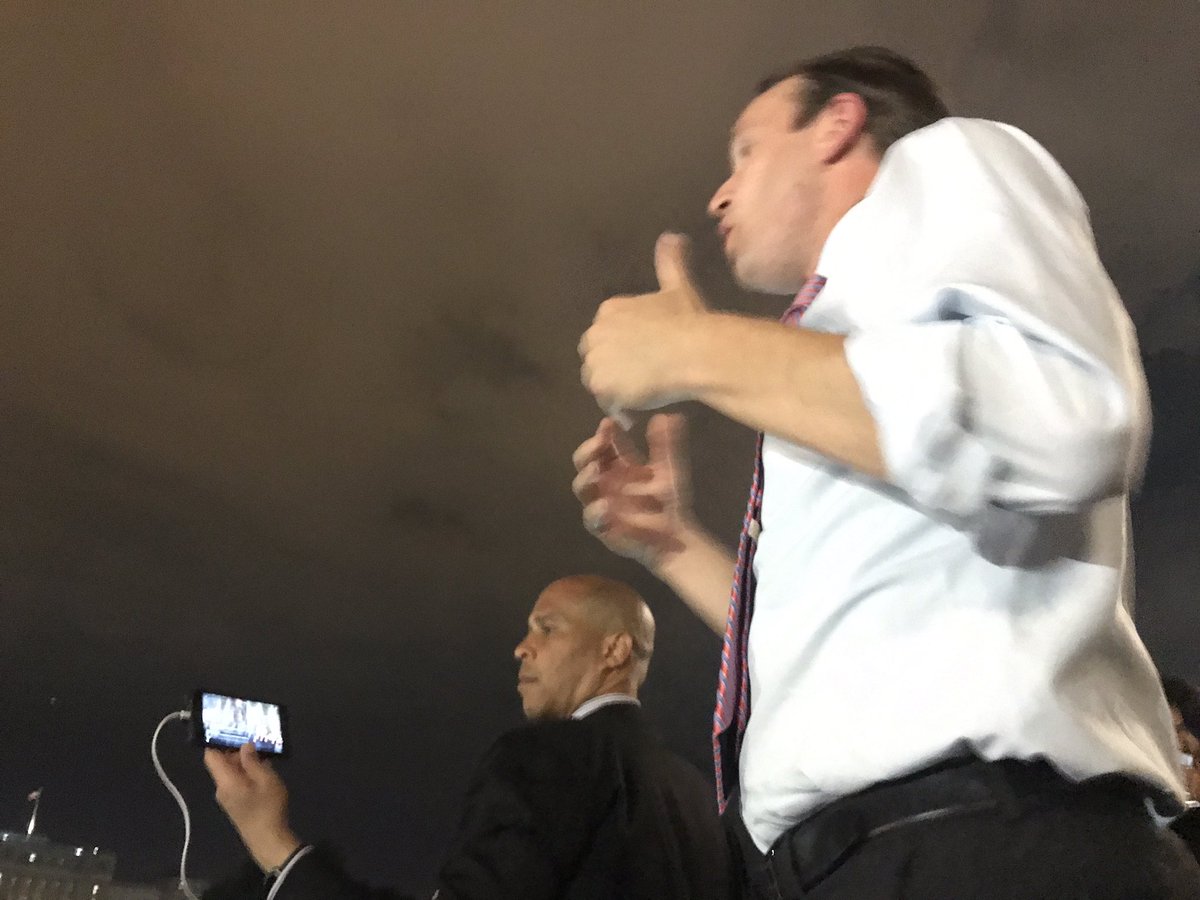 23. Where did these people come from? Honest question. If you were there, how did you find out about it? 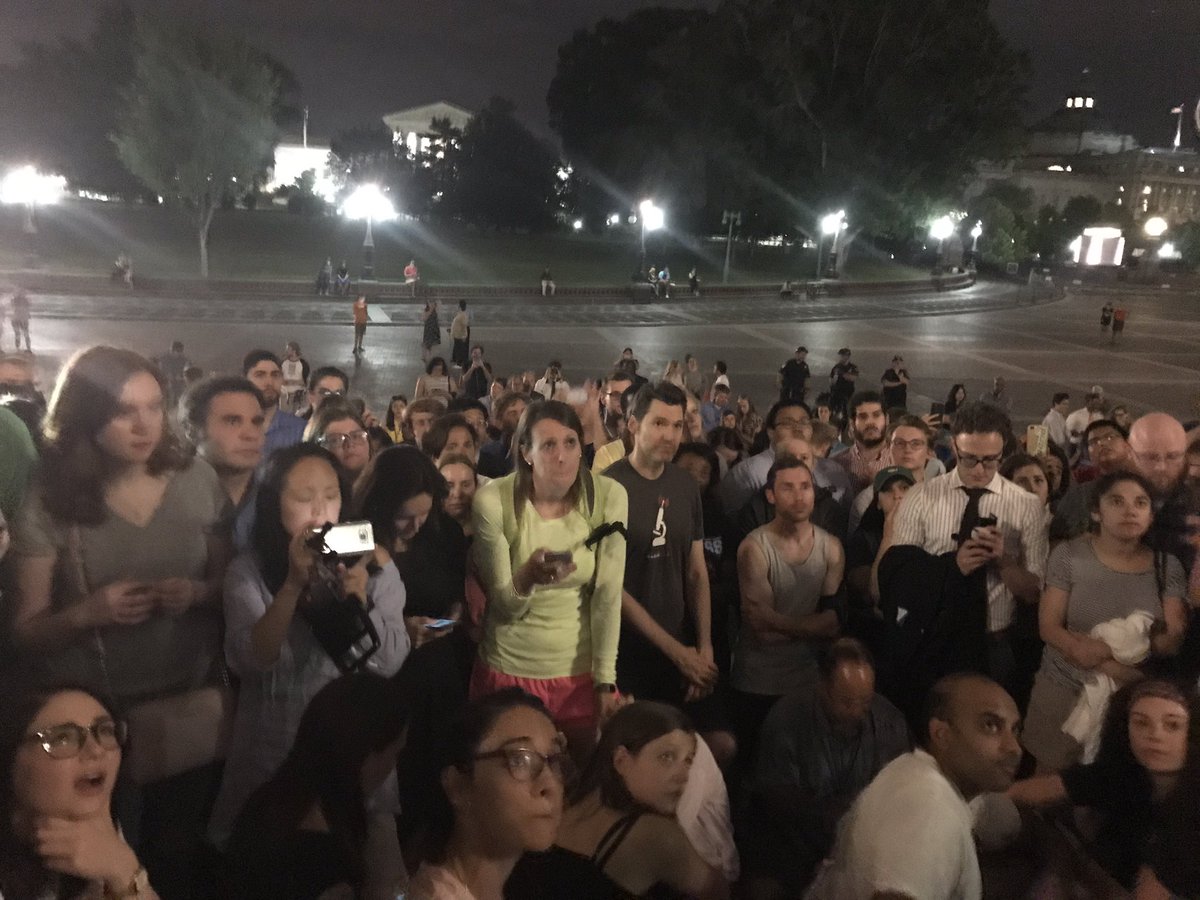 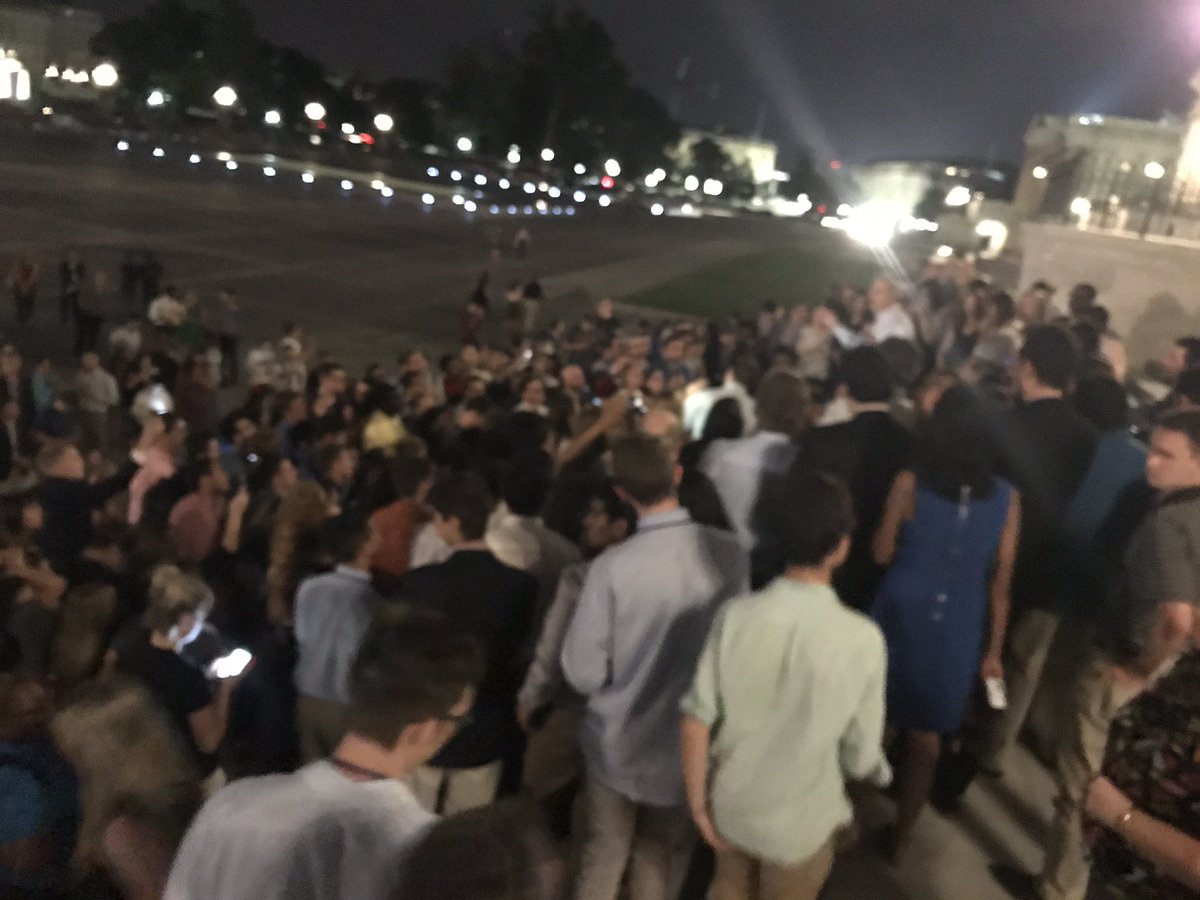 24. Here's why this matters. The whole question in this health care fight is whether the public—which HATES the bill—is going to show up.
25. There are 52 Republican Senators. This is their top priority. By rights, it should be done already. Smart insiders still say they'll win
26. And yet they might be cracking up. And there's just one reason for that: you. Me. All of us. A public that thinks this bill is hideous.
27. One way or another, this week is probably going to be historic. One of the most morally bankrupt bills in US history could pass.
28. OR: the resistance could come of age. The public could rise up. Backroom deals could fall apart. Our values could beat their cynicism.
29. The whole question is whether GOP senators come to the conclusion that they can't get away with this. That the public is too outraged.
30. Look, I can't predict what will happen this week. Very strong chance it will end tragically. But tonight—a spontaneous, joyous protest?
31. Hundreds of people outside the US Capitol at 11pm on a Monday, thunderously promising to show up every day this week to fight Trumpcare?
32. People texting their friends then and there, asking them to show up for the human chain protest this Wednesday? (5pm! You should come!)
33. This is what it's supposed to feel like at the beginning of something big. This is what movements are supposed to feel like.
34. I don't know if we beat Trumpcare. But I know that tonight gave me hope for a movement that believes health care is a right.
35. After the crowd broke up, I finally went over to @CoryBooker the to ask for my phone battery back, and maybe a selfie please? Cheese! 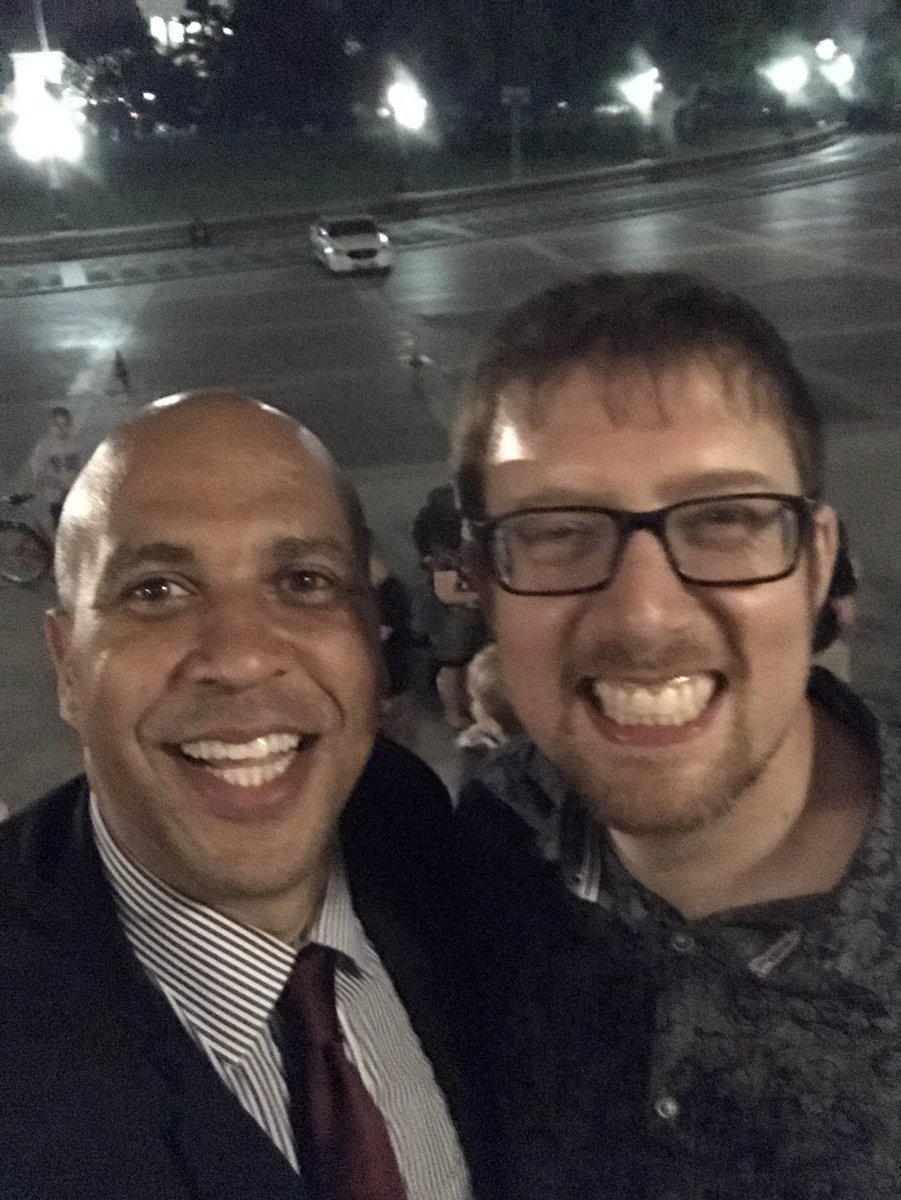 36. I only learned how it started after it was all over. You should watch & share the whole video here: facebook.com/corybooker/vid… 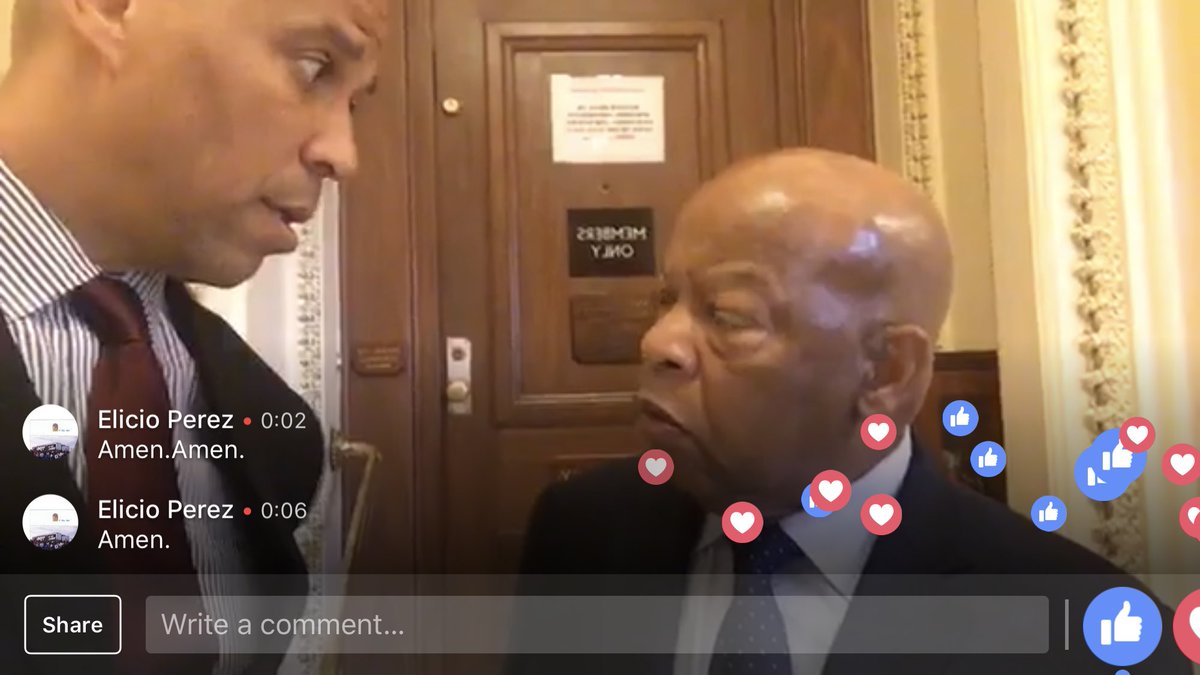 37. Let's make this the kickoff moment for the week we all get together and defend 22 million human beings' health care.

@benwikler
Oct 9, 2018
Tomorrow, Chuck Grassley is holding hearings for two Ohioan extremist Circuit Court nominees, Chad Readler and Eric Murphy. Sherrod Brown (D-OH) objects. For years, home-state senators had a courtesy veto over nominees from their states. But McConnell/Grassley eliminated that. 1/
Chad Readler leads the Civil Division in Trump's Department of Justice. He led DoJ's work to kill the Affordable Care Act, personally signing a brief so dishonest that the career attorneys wouldn't touch it. Now he's up for a lifetime appointment.
pfaw.org/blog-posts/jud…
Chad Readler defended family separation. He helped block millions of workers from overtime pay. He fought for 3d-printed guns, against DACA, for the military trans ban, for the Muslim Ban, and—in private practice—for Big Tobacco. He shouldn't be a judge.

@benwikler
Oct 5, 2018
In the Kavanaugh fight, nobody knows for sure what's going to happen. The conventional wisdom in DC is that the GOP will have Kavanaugh confirmed by Saturday afternoon, and he'll be on the bench by Monday. But you know what? That was the conventional wisdom a week ago, too. 1/
Politics is unpredictable. The one thing you can control is whether you try to do something about it. And people *are* doing something—they're doing everything they can think of. Right now, for example: there's a #PeoplesFilibuster protest @ the Capitol that will go *all night.*
If you're in the DC area, can't sleep, and wondering what to do, head out to the Capitol right now and look near the Senate steps on the NE corner. Or if you can't make it over there, here's the live video feed:
facebook.com/wedemandjustic…
Read 7 tweets

@benwikler
Oct 3, 2018
Furious about Kavanaugh? Don’t just sit there. We need your power. The truth is, there’s a LOT you can do. We may only have four days until the final vote, and your voice is needed now. This is a thread about what’s coming, and how you can help. Please follow along and share. 1/
What's next with Kavanaugh? On Wednesday, McConnell sets wheels in motion by filing for cloture. Senate rules require an intervening day before cloture vote—so that vote will be Friday. Then 30 hours of debate & final confirmation vote as soon as Saturday night. Time is SHORT.
What about the FBI report? WSJ says it could end by Wed. Many potential corroborating witnesses won't be interviewed—nor Dr. Blasey Ford, nor Kavanaugh. Once background report is updated, only Senators will get to see it. Don't bet on it to end this fight.
thehill.com/blogs/floor-ac…
Read 31 tweets

@benwikler
Sep 21, 2018
"The Trump administration says global slavery and child labor are bad — for American businesses
They give an “unfair advantage” to US competitors, according to the US Labor Department."
>> I see this as an instance of something good-ish. Lemme explain. 1/

vox.com/2018/9/21/1788…
What's happening with this report on global slavery & child labor is something that's happening throughout our government: mission-driven civil servants are figuring out how to keep pursuing their long-time goals by reframing them into language that resonates with Trump.
You'd think that Trump's government would simply stop working on stuff like forced labor. But the people actually doing the work? They care. So, like good bureaucrats everywhere, they figure out how to manage up.
Read 4 tweets

@benwikler
Sep 20, 2018
GOP seems to think that if Dr. Blasey Ford doesn't speak at their 2-witness hearing on Mon, she'll disappear. But per @JRubinBlogger, "Ford has another option: Hold a news conference with her own experts and make the case directly to the American people."
washingtonpost.com/news/opinions/…
It is Dr. Blasey-Ford's right to decide how, whether, when, and where to share her story. It's unclear to me why Senate Republicans keep saying, and apparently believing, that they have the power to dictate terms to her. She doesn't have to play their game.
Media seem confused about this too. Axios quoted @JeffreyToobin on CNN saying "If she refuses to testify on Monday, Kavanaugh is getting confirmed." Why? If she chooses to make her case publicly on her own terms, it could be *more* powerful than in a GOP-controlled hearing.
Read 4 tweets