Dec 15, 2017 • 12 tweets • 6 min read
.@UofDallas researcher Ruth May is an expert in all things corporate in Russia and has worked to make connections in the trail of money flowing from Russian oligarchs to the GOP. This thread is her latest 👇 1/12 dallasnews.com/opinion/commen…
According to May, digging through campaign finance reports available to the public shows troubling connections between Russian donors, Trump and a number of GOP leaders 2/12
The trail traces through Vladimir Putin, state-owned banks and state-affiliated companies, oligarchs and subsequently GOP leaders 3/12
Len Blavatnik, Oleg Deripaska and Viktor Vekselberg, oligarchs with ties to Russian government, are all connected by their role in RUSAL a massive company of which they own 69% 4/12
Billionaire, and dual U.S.-U.K citizen, Blavatnik contributed to PACs associated with @SenateMajLdr, @marcorubio, @ScottWalker, @LindseyGrahamSC, @JohnKasich, @SenJohnMcCain and @realdonaldtrump 5/12
Len Blavatnik, one of the largest donors to GOP political action committees in the 2015-16 election cycle, is just one of the concerning players 6/12
Blavatnik is accompanied by Oleg Deripaska – one of the Kremlin’s favorite oligarchs who gave $10 million a year to Paul Manafort, Trump's former campaign manager, to push pro-Russian policy according to the @AP 7/12
Viktor Vekselberg, one of the 10 richest men in Russia, has connections to at least two Americans who made significant contributions to GOP campaigns 8/12
At the center of all the money is the notorious Bank of Cyprus which has a long history of being a conduit for dirty money flowing in and out of Russia 9/12 dallasnews.com/opinion/commen…
Russia’s second largest state-owned bank VTB also quietly transferred $191 million into an offshore company which Yuri Milner then used to fund nearly half of a purchase of @Twitter in 2011 10/12
VTB was exposed in @ICIJorg’s #PanamaPapers in 2016 for facilitating the flow of billions of dollars to offshore companies linked to Putin, according to @McClatchyDC 11/12 mcclatchydc.com/news/nation-wo…
Explore for yourself the tangled web of Russian money that warrant special investigator Robert Mueller’s attention, according to Ruth May 12/12 dallasnews.com/opinion/commen… 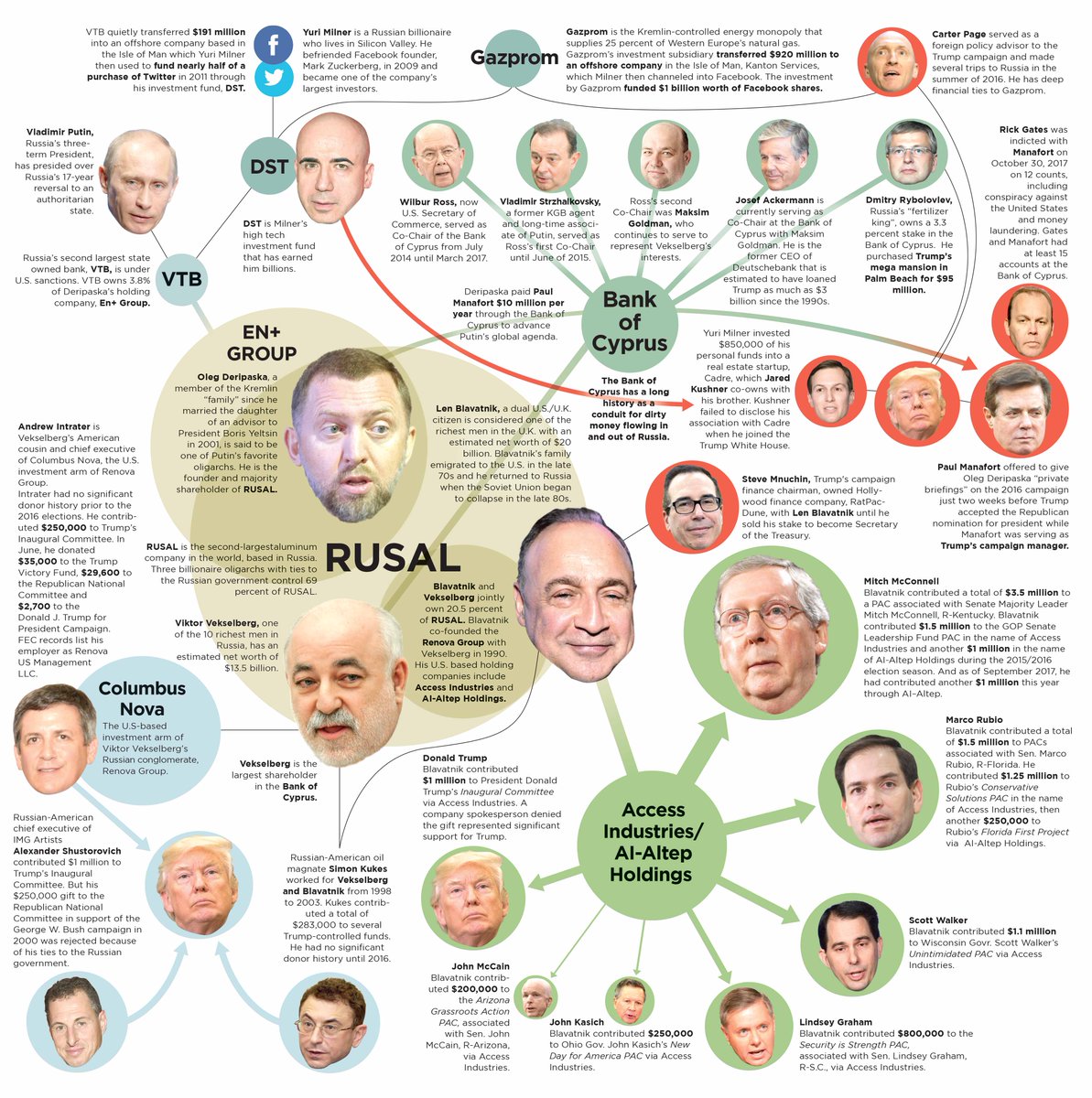 @dallasnews
Sep 26, 2018
Ever wonder who the Texas governor and other statewide elected officials are talking to and meeting with in Washington? We did.

dallasnews.com/news/2018-elec…
The vast majority of those interactions happen outside the public’s view. So we used open records requests to get the official schedules for Gov. Greg Abbott, Lt. Gov. Dan Patrick, Attorney General Ken Paxton and others.
While not all meeting details or activities are recorded, even an incomplete look makes clear that these Texans are enjoying easy access in President Donald Trump’s Washington.
Read 6 tweets

@dallasnews
Sep 23, 2018
1/ Imagine lighting a match or flipping a light switch – the space around you ignites in a ball of flame, severely burning you or your family...
2/ More than two dozen homes have exploded in North Texas since 2006. The state could put financial pressure on the gas company to improve safety – but it usually doesn’t. interactives.dallasnews.com/2018/time-bomb/
3/ Fires and explosions along a massive network of pipelines owned and operated in Texas by @AtmosEnergy have resulted in at least 9 deaths and more than 22 serious injuries since 2006. interactives.dallasnews.com/2018/time-bomb/

@dallasnews
Aug 24, 2018
1/ Jon Lambert was a PhD student at @Cornell. One morning, he slipped on a patch of ice and slammed his head into the pavement. He lay on the concrete and cried out. dallasnews.com/life/life/2018…
2/ “I think this scream came from a part of me that realized something I’d only considered abstractly before,” writes @evolambert.

“These bodies and brains of ours — and the lives they enact — are fragile, and can be broken in an instant.” dallasnews.com/life/life/2018…

The doctor told Jon to repeat those five words back to him; he could only remember three. They became his inner mantra for the next few years, one he would recite out of an obsessive compulsion to make sure he was OK.
Read 5 tweets

guidelive.com/restaurant-ope…
Forty years ago, The Dallas Morning News ran its first restaurant review with a star rating. Since then, through eight chief critics and thousands of reviews, the five-star system has remained pretty much the same.
But dining in Dallas has changed and shifted, particularly in the past decade.

So, we went back to the drawing board to create a new star rating system. Our goal: to create a system that reflects what we are looking for in a restaurant today, not the trappings of bygone eras.
Read 5 tweets

@dallasnews
Aug 13, 2018
1/ Earlier this year, 18-year-old NeQuacia Jacobs, an honor student at South Oak Cliff High School, was shot to death in what appeared to be a random act of violence. buff.ly/2KNVpwr
2/ Last year in Dallas County, 63 people under the age of 25 were shooting victims. buff.ly/2KNVpwr

@dallasnews
Jul 22, 2018
1/ Remember when we showed you how North Texas cities use taxpayer money to compete against each other for jobs and investment? dallasnews.com/business/econo…
2/ Now, @stephanierlamm and @JillCowan take you to the Palo Pinto County town of Mineral Wells, where a cautionary tale played out. dallasnews.com/business/econo…
3/ Experts say what happened is a direct result of the state's approach to economic development, which puts Mineral Wells, located about 50 miles west of Fort Worth, in a tough spot.