Oct 3, 2017 • 25 tweets • 7 min read
1) Repeat after me: After every mass shooting I will kick and scream and freak the f out because that's what the @NRA doesn't want us to do.
2) And if you're guilty of saying "Nothing happened after #SandyHook so nothing ever will," you're not only wrong - you're the problem.
3) We didn't get here overnight - the @NRA had a 30 year head start. They've hijacked our nation and now it's on us to take it back.
4) Here's what's happened since #SandyHook. The first grassroots army to prevent gun violence assembled: @MomsDemand, part of @Everytown.
5) We have 60,000 active volunteers (like me) and 4M supporters. We are in every single state. We pass good bills and stop bad bills.
6) We helped pass background checks in 7 states, bringing total to 19. 50% of Americans now live in states requiring them on every gun sale.
7) We helped pass laws in 24 states - red and blue - to keep guns away from domestic abusers. Just last week we passed one in Rhode Island.
8) In 2017 alone, 7 states enacted domestic gun violence laws, almost all of them led by Republican governors: LA, NV, NJ, ND, TN, UT, RI.
9) We've passed bills to strengthen our background check system and bills that enable emergency gun violence restraining orders.
10) We've killed HUNDREDS of @NRA bills to force guns on campus and in K-12 schools, to expand Stand Your Ground, to dismantle permitting
11) In fact, gun safety was silver lining of 2016 election: Gun safety ballot initiatives won in NV, WA and CA - despite @NRA opposition.
12) And we're changing US culture by getting companies like Trader Joes, Target, Starbucks and Levis to prohibit open carry inside stores.
13) After open carry was passed in Texas, @MomsDemand volunteers went door to door and convinced 500+ local businesses to prohibit it.
14) After bill passed allowing guns in Ohio daycares, @MomsDemand volunteers went convinced more than 1,500 daycares to prohibit guns.
15) We are fiercely and fearlessly taking on the most powerful lobby this nation has ever seen – and we are winning. But this is a marathon.
16) 93 Americans are shot and killed every day, hundreds more injured. That's the equivalent of nearly two Las Vegas shootings every day.
17) Americans shouldn’t worry about being shot at concerts, theaters, schools, churches and nightclubs. We don’t have to live like this.
18) This is a defining moment: Do we want to live in a country where @NRA vision prevails? Where we're armed to the teeth all the time?
19) Or do we want to live in a country where we feel safe in our daily lives? Will we fight for stronger gun laws that make us all safer?
20) Here's how to start. First, text ACT to 64433 and join us. We'll keep you updated on fights in Congress and the state where you live.
21) Now text SILENCERS to 64433; tell Congress to vote NO on silencers and concealed carry reciprocity - @NRA priority bills in Congress now
22) Now Google @NRA ratings for your representatives in the statehouse and Congress. If they have A ratings, call them and FREAK THE F OUT!
23) Vow today to get off the sidelines; protect your family and community - your own life. Commit to ACT in honor of Las Vegas #VegasStrong 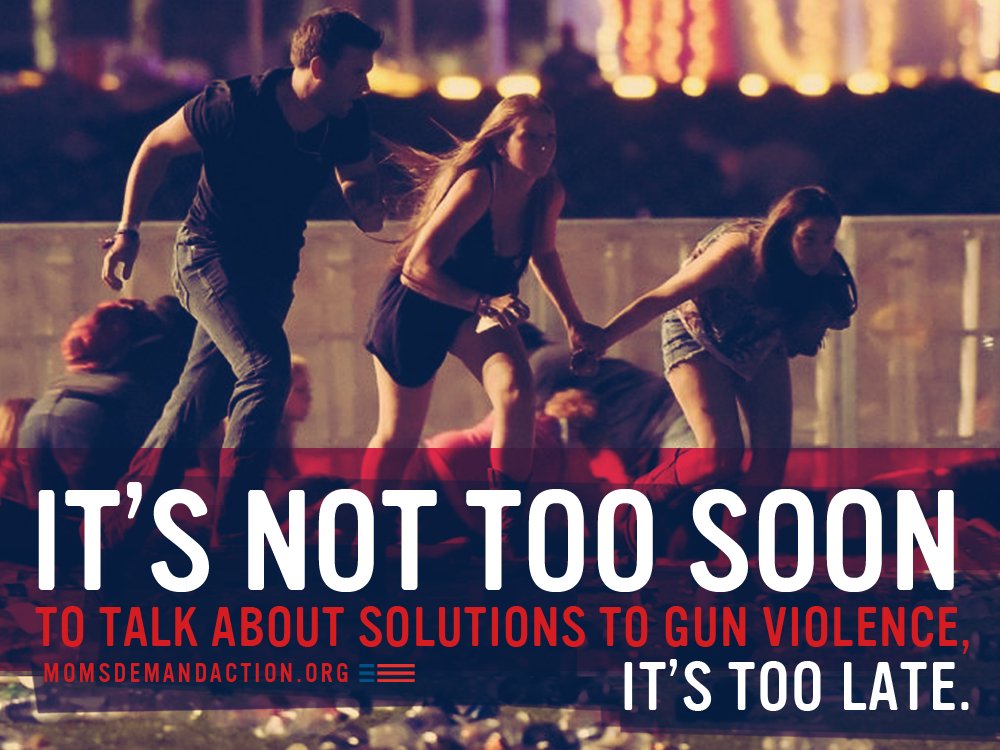 24) Here’s how to act today. Text REJECT to 64433 and warn Congress that we‘ll hold them accountable for not acting. #RejectTheNRA 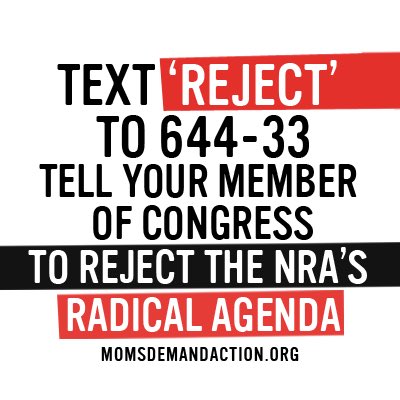 25) Finally, PLEASE GIVE to support @MomsDemand volunteers (like me)! @MikeBloomberg will match dollar for dollar:

@shannonrwatts
Oct 3, 2018
THEY DID IT!!! After Pennsylvania @MomsDemand volunteers worked to pass this bill to disarm domestic abusers for over three years, it is finally headed to the governor’s desk to sign it into law.

How did we do it? @MomsDemand delivered an open letter to Pennsylvania lawmakers in the House signed by over 7,600 Pennsylvanians. We drove tens of thousands of calls and digital messages to lawmakers urging them to support #HB2060.
We hosted five press conferences, throughout the week of September 5th, with state legislators of both parties, local law enforcement and concerned citizens. We hosted a “Protect Pennsylvania Families” rally with community leaders and lawmakers on September 24th.
Read 7 tweets

@shannonrwatts
Oct 1, 2018
Trump to woman reporter: "She's shocked I picked her, she's in a state of shock”
Reporter: “I'm not, thank you Mr. President”
Trump: "I know you're not thinking, you never do”
Reporter: "I'm sorry?"
Trump: "Go ahead"

This is institutionalized misogyny.

More. Trump shouts down a different woman reporter as she tries to ask him a question about Kavanaugh.

“Don’t do that. That’s not nice,” Trump tells her while wagging his finger.

Again. Trump cuts off a woman reporter who tries to ask him why it’s taken over a year for his administration to prohibit bump stocks after promising he would in the wake of Las Vegas.

H/t @atrupar - follow him for best video highlights every day.

@shannonrwatts
Oct 1, 2018
Here's how @Everytown and @MomsDemand are gearing up for the midterms. First, we recently announced a first wave of targeted spending of up to $10M in four critical states: Georgia, Michigan, Nevada and New Mexico.

washingtonpost.com/national/gun-c…
.@MomsDemand has given out Gun Sense Candidate distinctions to over 3,000 candidates in 48 states. And @Everytown has endorsed dozens of volunteers and gun violence survivors up and down the ballot. They're also endorsing gun sense champions in key races across the country.

Our @momsdemand and #StudentsDemandAction volunteers have hosted 500+ canvasses, knocked 34,000+ doors, made thousands of calls, held 100+ voter registrations drives, & registered tens of thousands of voters. Check out our next Weekend of Action Oct 13/14: gunsensevoter.org/volunteer
Read 4 tweets

@shannonrwatts
Sep 4, 2018
Based on what we already know, the judicial record of Brett Kavanaugh shows he has applied a dangerous interpretation of #2A when determining whether a law is constitutional, and demonstrates an extreme view of the Second Amendment that elevates gun rights over public safety.

Kavanaugh made it clear he'd strike down prohibitions on assault-style weapons. He dissented from a decision upholding D.C.’s ban on assault-style weapons and its requirement to register handguns. The dissent put him at odds with every other appeals court to address the issue.
This matters because 10 years ago, in its ruling in DC v. Heller, the Supreme Court established a clear precedent: while law-abiding citizens have a right to have firearms at home for self defense, the #2A is not absolute and allows for common-sense laws to protect public safety.
Read 4 tweets

@shannonrwatts
Aug 31, 2018
He gave this speech the same day a U.S. Attorney in Massachusetts arrested a Trump supporter for threatening to fatally shoot journalists.

According to reports, the FBI searched the suspect's California home and seized 20 guns, both long guns and handguns, and hundreds of rounds of ammunition.

cbsnews.com/news/man-charg…
These alarming threats come just two months after an Annapolis, Maryland, man shot and killed five employees of The Capital newspaper. Prior to the shooting, the gunman sent threatening letters and messages about attacking the office and its staff.