Nov 28, 2017 • 16 tweets • 5 min read
Hey hey drop-in time! This is Irene. She just came in to talk. She bought a new (desktop) computer at Best Buy. They said her old hard drive was "unsalvageable" (it was working when she brought it in). I suggested 2nd opinion.

Her main issue was how the new Outlook is different from Outlook Express. She wanted it to do one thing it wouldn't do. I searched help forums to determine, she was right, it won't do that thing. I suggested workarounds.
She went home with a list of "try this" stuff. And then we talked about how terrible Comcast was for a while (she uses their email and wishes she didn't, hence the Outlook) and she headed home.
Susan continues to be challenged by moving music (and playlists, now) from her laptop to her phone. We put VLC on her phone but it won't play her Windows Media Player playlists. She has acquired a ton of skills, but has a BUT WHY attitude that is holding her back.

I told her I can help her with her emotional concerns or her technical concerns but not both and certainly not both at once. I showed her how to Google an error message and she swears she's never done that before. "never Googled an error message?" "Never Googled."
I may have said, at one point, "Do you want to solve the problem or do you just want to complain?" I am no saint. I went on "It's ok to find this totally frustrating but the way to get more comfortable is to practice more" Susan keeps away from "screens" This was not welcome news
Meanwhile E was helping Sylvie with... something. When she heard Susan was making playlists she said "Hey can I make playlists on my phone too?" (they both teach yoga) "I'll let you know if we ever get it working." I said. She moved on to MailChimp which is my wheelhouse.

I had to tell E what "in my wheelhouse" meant. He told me about how his friend found a CyberPower PC in the trash and they are trying to revive it. Sylvia wants to put a gift certificate into her email to yoga students. "How do I get a gift certificate?"
E is like "JUST MAKE ONE" I break it down into steps.
- how to find a template
- how to put that on your computer
- how to save it as an image
- how to "borrow" one from Google images
E looks at me like I am speaking gibberish.
Sam shows up with a sleek new laptop and complains that Word only works when she's online (she has no service at home). Actually she can't get her new laptop online at all. School wifi is bad enough I'm not sure if it's her or us. Tell her to go to library & call me tomorrow.
We do step through Windows wifi troubleshooting steps and finally get to the error message, verbatim: "There may be problem" Thanks for nothing, Microsoft. At least we have a good laugh over it.
Nancy also came with just a question. She recorded a series of lectures to MP3 and wants to know how to share them. I explained how they're probably too big to email and suggest Dropbox. This is her writing D R O P... on a bank deposit envelope.

Nancy has the same DSL provider as I do and I know her upstream bandwidth speed so I suggested she go to the library to do the uploading. #digitaldivide
(rethreading!) Irene also needed to know what happened to the little envelope button where she could email a document since MS Word is all new for Windows 10. I said it's buried in a share menu now. We found it, I think.
E helped Kristin manage multiple email accounts on her phone. She has one that hasn't worked since June "But now that it's basketball season, I need it to work" We deleted it and added it again but it's unclear if its working. School uses Google for Domains and I am ¯\_(ツ)_/¯

Kristin is also the boss house manager at the local music hall where I am house managing the Johnny Cash Tribute on Saturday. "Hey can you bring that handout you made?" (with all the house manager tasks on it) "And maybe add something?" I said I'd be glad to. EOM #Vermont

@jessamyn
Jan 9, 2018
Drop-in Time 2018! Six folks plus E who got to teach someone how to cut and paste today! Here he is helping Judy sign up for Twitter. Depending how you sign up for Twitter it may or may not require a cell #. Judy didn't have one, I lent her mine. 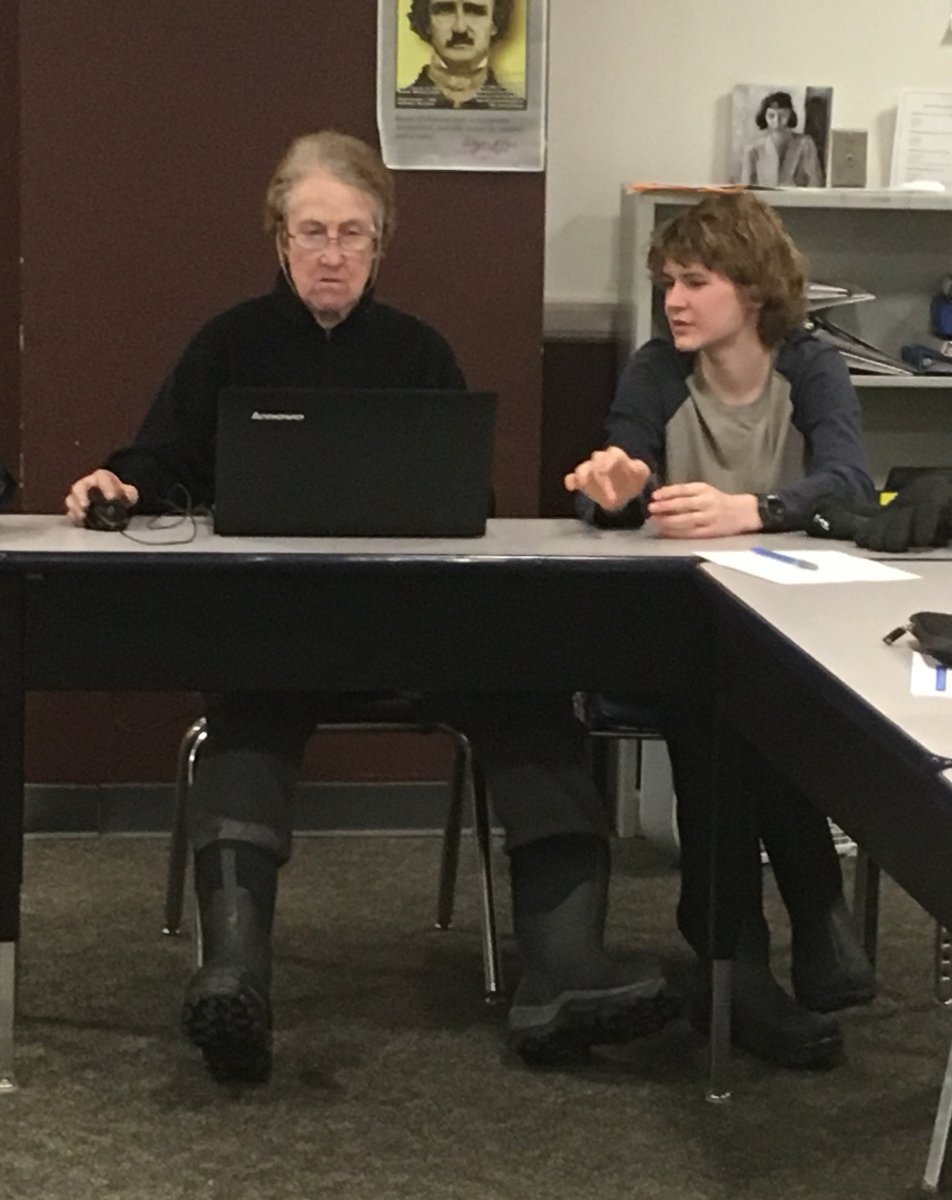 E doesn't really know what Twitter is but he knows the President acts up on it, and he is a quick study. My other students chimed in "I don't care what other people had for breakfast!" and I was like "How do you even know that is a thing?"
Sandy is going to Peru in a week. She was having trouble locating some files so she called Apple Support and they set her up with her Documents AND her Desktop in iCloud Drive. Seemed odd. 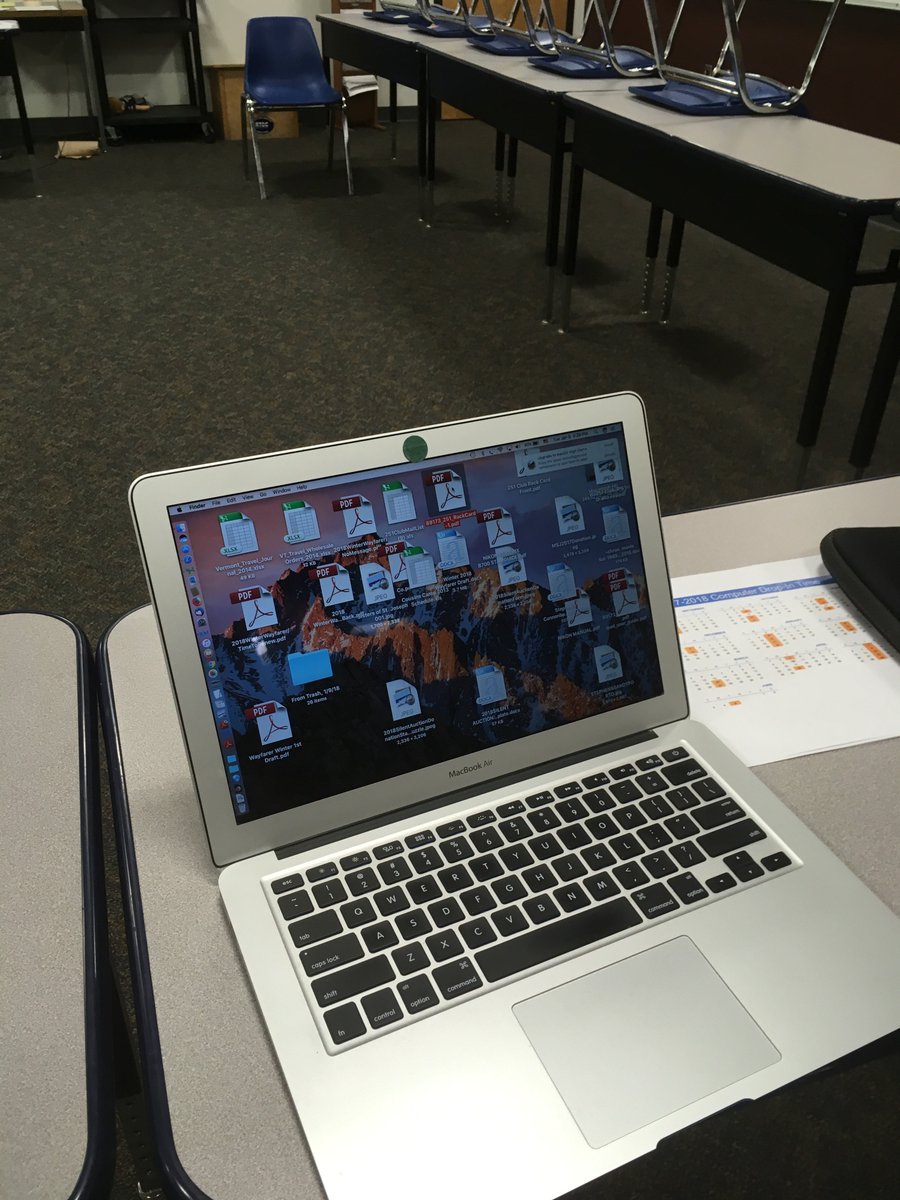