Dec 2, 2017 • 35 tweets • 16 min read
Depiction of a temple having a dome and entrance framed within a 'pointed arch'
Dated: ~1-3rd century CE
Entrance is likely derived from arched torana with concentric arches, space between them is beautifully decorated with scrollwork and floral patterns. #Gandhara

Dome of the temple was capped by Kalasha.

Fortunately there are various temples same features which survived the wrath of Islamic invaders. See the one in below link

In the above temple, we can see the space for similar projected door frame.
Head of Skanda, Peshawar

General plan of stupa is T-shaped above which a ' hemispherical' Stupa rests. Stupa is surrounded by a series of Arcades on three sides.

Design of Stupa is architecturally unique. Stupa appears to be square in plan at the centre of which is dome Stupa resting on cylindrical base.
@Chandrapida1 @TrueIndology

Continued..
Top portion of dome is decorated with lotus petals(as common in Indian architectural tradition. Indian dome derived from Stupa ,is always decorated with lotus petals unlike their Persian counterparts.).
3. Another interesting feature of this Stupa is four towers(somewhat similar to Chakri Minaret) at the corners of square plinth. Height of these towers is less than the central monuments. Most popular monuments of this concept is Taj Mahal.
Burmese temples of Bagan also follow this concept. However, in Burmese temples towers at the corners are replica of central tower forming quincunx pattern. This pattern can be repeated in successive tiers as observed Bengali and south India tradtional architecture.
4. This concept also appears throughout SE Asia. In My-Son Temple of Vietnam this concept is used prominently. In My son temple 4 turrets attached to the corners of cubical lower tier of temple.
Garuda from Ghazni, Afghanistan
Dated: ~3rd century CE or older

Lion carved on marble from Ghazanavid palace, Afghanistan
It is usually believed to be of Ghazanavid era which is wrong. It was either looted by Ghaznavi during his India campaign or part of older pre-islamic heritage. It is carved in a typical begram ivories fashion.

Elephant carved in marble, Ghazanavid palace, Afghanistan
Part of loot by Ghazanavi during his India campaign. There are no sculptures of elephant from Afghanistan or beyond which are carved so perfectly.

Chhatari(s) are integral to Indian architecture since...

Some Temples were flanked by cylindrical towers(as in Taj Mahal) located at the corners of square platform. There are three entrances one rectangular doorframe flanked by typical Indian pointed arched aisle.
One of the aisles with pointed arched openings. Span of arch is equal to that of raise of arch.

Temples are usually dated between 4th and 5th century CE. Actually these temple forms could be no later than ~2nd century because a lot of them are already depicted in #Gandharan sculptures dated 2nd century CE.
Dome of temple essentially derives its form from contemporary Stupa(s). Originally it would have been adorned with lotus petals and surmounted by the Kalasha.
Typical Indian 'pointed arch' opening from Takhte Bahi monastery dating back to ~4-5th century CE
It emulated the shape of sacred lotus petals.
@IndiaHistorypic @TrueIndology @ReclaimTemples

Ogee arch forms derived from this very shape. Buddha and other deities were often depicted within this Bodhi leaf frame which later transpired into its structural usage.

Evolution of #dome in #Indian #architecture

#Hindu buildings/#temples have lotus or Amalaka and Kalasha atop it
#Buddhist temples have conical spire atop dome as seen in #Stupa and a lot of temples from antiquity.

Here chariot is interesting . Rams(?) Are pulling chariot instead of usual horses. A whirling sun symbol can be seen on each of ram though with opposite rotation probably more of a philosophical implication.

Left: Minaret Chakri dating back to ~1st century CE or even older
Right: sculpture depicting the Stupa flanked by four towers
Towers depicted in sculpture are same to the one freestanding constructed tower in the left.
The tower is 95feet high with a Damaru capital. Lions lost

This tower is living testimony of ancient bygone era. Once it would have been common site in Punjab and Gandhara not any more. This form of circular tower which influenced the towers or minarets of middle East and central Asia not vice versa. #ReclaimTemples #architecture
Minarets attached to the building itself is Indian tradition as Sculptural depiction of such Stupa and Temples suggest. Here is another one. In India lions were replaced by Chhatari serving the purpose of watch towers as well.

Here is another image of Minaret Chakri. Similarity with scupltural depiction is just beyond obvious. Probably there was some Stupa or temple here razed to the ground. It is one of the four towers. #ReclaimTemples #ReclaimArchitecture

This is another fragment of Sculpture dating back to 2nd century CE...depicting departure of Siddhartha..but this not important.. important is depiction of palace..note the the second storey of palace supported on pointed arches.. #ReclaimTemples #ReclaimArchitecture

So this sculpture depicts Islamic architecture 500 years before birth of Islam or is it Indian architecture dubbed as Persian, Indo-sarcenic and what not? @ReclaimTemples @Chandrapida1 @TrueIndology @aryabhatti
Here is another image of Minaret Chakri. Similarity with scupltural depiction is just beyond obvious. Probably there was some Stupa or temple here razed down to the grounds. It is one of the four towers flanking temple or Stupa.
Dated: ~1st century CE

Remains of pointed arched niche,Taxila
Dated: ~5th century CE or older
Pointed arch took ~300more years to reach to middle East and Egypt before that they used typical Roman arch.
This niche once housed image of Buddha or some divinity. #ReclaimTemples

Lotus flower stemming from water as sculpted in one of the finest Gandharan sculpture
Dated: ~2nd century CE
Fishes and other aquatic creatures are depicted here. In the way river currents are sculpted, reminds me of Hoyasala sculptures.

2)"Unlike China, with an odd textual reference or a drawing or a singular artefact, was the entire industry in India – which remained unrivalled in the history of the world. Compared to China’s paltry production of gunpowder, India’s widespread and organized gunpowder production

3)...system points towards indigenous development. [There are reports, that in “664 an Indian visitor to China reportedly demonstrated the peculiar flamability of saltpeter and provided instructions on how to locate it (Pacey 1990, 16)."]”

Chand Baori stepwell, Abhaneri ,Rajasthan
Dated: ~9th Century CE
The four sided 13 storied stepwell is over 100feet deep and lined with over 3500steps with an amazing geometrical precision. This stepwell is one of the largest stepwells, a magnificent device to store water.

A large stepwell and temples, Bundi(Rajasthan)
Anda(dome) surmounted by Kalasha forms the Shikhara of temple.
It is known as Dabhai Kund. Currently filled with dogshit and garbage. It is maintained by ASI.

@wiavastukala
Feb 11, 2018
Just see the huge, finely cut pieces of stone used in this temple. Also note the pointed arch(lotus petal arch) niche at the centre of the rectangular temple(fourth image). There are thousands of such temples lying in ruins.

Central niche of Adina Masjid, Pandua
These mihrabs are nothing but niche(s) sans Vigraha as suggested by E. B. Havell.
1. Trefoil arch resting pillars with Kalasha base(such pillars are depicted in Shunga sculptures) 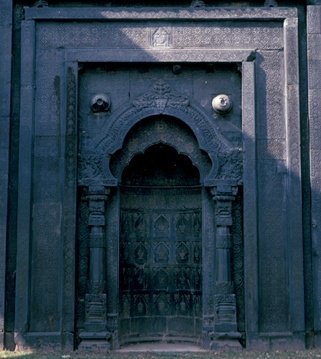 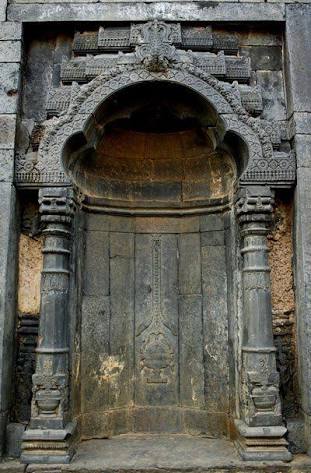 Here is a Pala era Vigraha(sculpture) of Vishnu of most exquisite form.
Note the proportions of trefoil arch and columns. Exact same and why not, after all both are product of same tradition. It is a lie that Torana were only wooden gateways of Sanchi type. 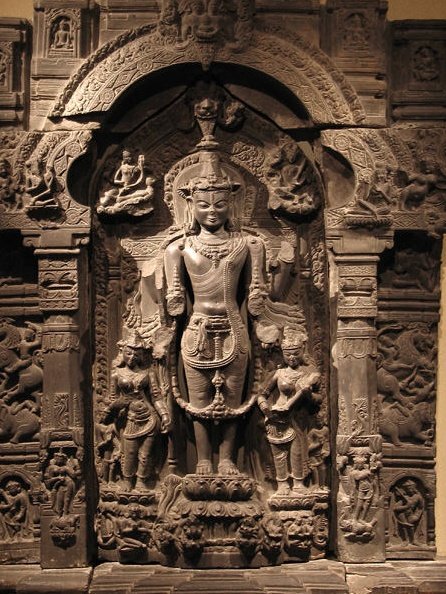 1)Relief depicting naval vessel, Borobudur Temple, Java(Indonesia)
Dated: ~8th century CE or older
Even before the accounts of the 1st century BC, there were written accounts of Shipbuilding and war-craft at sea.

2)Professor R.C. Majumdar says that there existed a comprehensive book of Naval-architecture in India dating back to 2nd century BCE, if not earlier.
3)The history of Indian shipping and maritime activities goes back probably to the early times of the Rgveda. The Jatakas, the Greek and Roman authors, the early Tamil poems as well as a host of archaeological discoveries in India and abroad
Read 32 tweets

@wiavastukala
Jan 14, 2018
1)Remains of temples from Ayutthaya city, capital of ancient Siam(Thailand)
Ayutthaya was named after 'Ayodhya' of Ramayana. Ayutthaya was one of the prominent cities of ancient Indic world, with the population perhaps reaching 1,000,000 around 1700 CE. Brahmins played great role

2) Temples of Ayutthaya were numerous in forms. For example this temple was essentially modelled after Stupa and having pointed arched niche in cardinal directions, typical Indian feature. Second one, is similar in form except it follows usual square plan.

3) Wat Chaiwatthanaram was built to represent mount Meru and followed a plan somewhat similar to Angkor. Central temple is flanked by 4 small towers replica of main Shrine. There are 4shrines at the corners of cloister.

@wiavastukala
Jan 1, 2018
1)A Preacher(Brahmin) Expounding The Poorans. In The Temple of Unn Poorna(Annapurna), Benares(Uttar Pradesh)
Note the stylized trefoil arch ending as lotus bud. Trefoil arch is one of the most popular arch form from ancient Gandharan region to ancient Bangal. 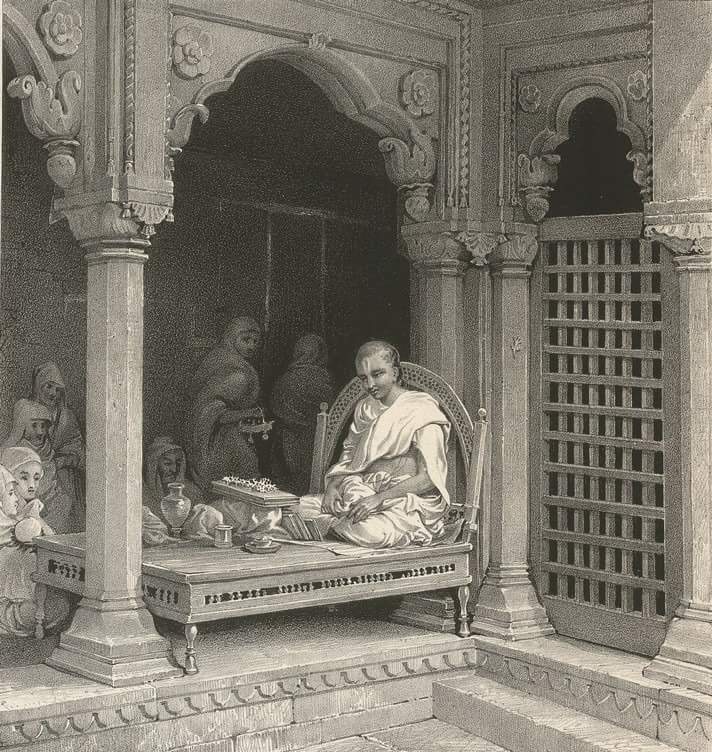 2) It was Bengal style of architecture which was influential in temples of Bagan, Burma. Burmese records also hints that Brahmins from Bengal region were chief architects. Hence, presence of true arch in Burmese temples is not surprising at all.
3)..due to lack of major stone queries, and brick being main construction material it was necessity of Bengal school of architecture to employ arches. Without it, civil architecture wouldn't have been that effective. Burmese temples used curvilinear Shikhara with Stupa domes.
Read 5 tweets