Jan 1, 2018 • 19 tweets • 9 min read
(1) Unsurprisingly, pro-Pakistan folks are spinning all kinds of lies about Afghanistan, India, China & Russia in an attempt to threaten & control President Trump & the USA. So it's a good time to revisit his historic 8/21/17 #SouthAsiaStrategy speech. whitehouse.gov/briefings-stat…
(2) Please bookmark the above tweet so you can refer back to this thread later. I'll be back soon to complete it (need coffee).

Here's how POTUS started talking in his speech about the war in Afghanistan. 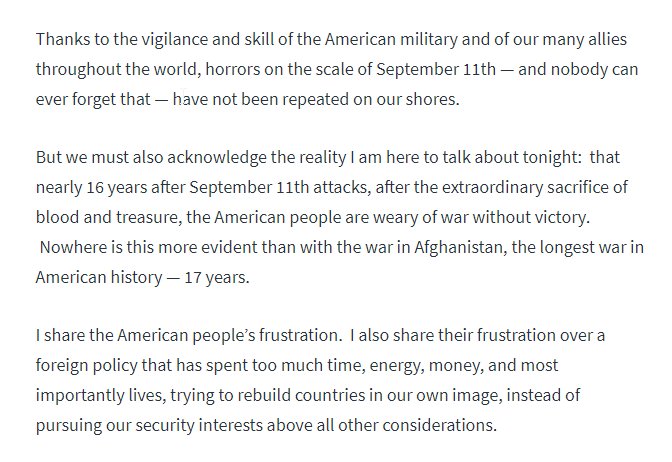 (3) In a decision that flushed out the faction of Trump voters who are selectively dogmatic and unwilling to consider the "realism" part of #PrincipledRealism, POTUS owned his change of mind on Afghanistan. Obama never admitted taking a stance that differed from his campaigns.

(4) As I heard POTUS say this on 8/21/17 I was nodding my head in agreement. This President learns from the mistakes of others so that he doesn't need to make them himself. 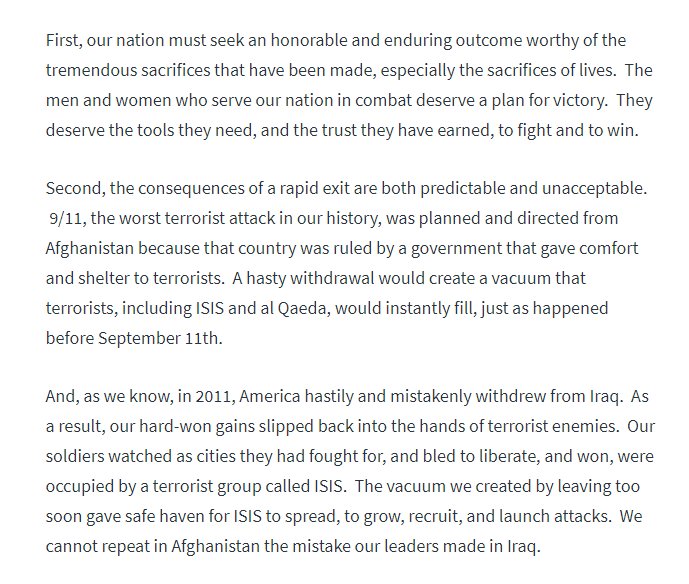 (5) Today, pro-Pakistan elements are trying to persuade us that we somehow owe Pakistan special treatment relative to other countries that support or harbor terrorism (or at a minimum, fail to fully co-operate with our counter-terrorism efforts). This is preposterous. 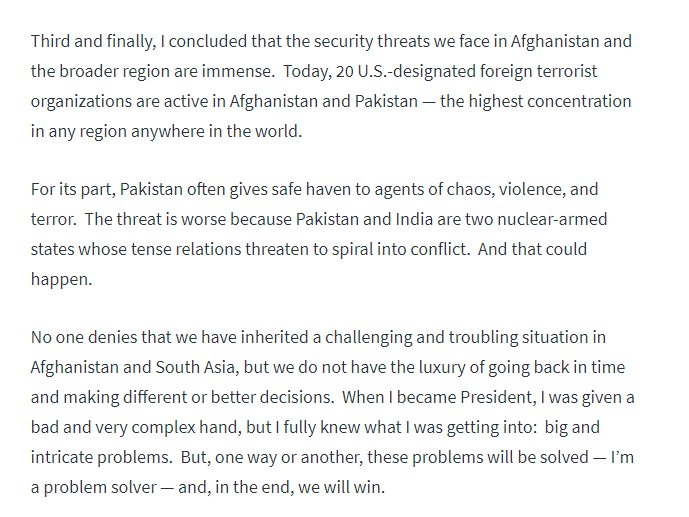 (6) #TerroristsAreLosers. Remember, until 2017, we were fighting terrorism with one hand tied behind our backs. From the vantage point of 1/1/18, IMO highly likely that on 8/21/17, POTUS knew all about #ObamaHezbollah & the events that would lead to the current #IranProtests. 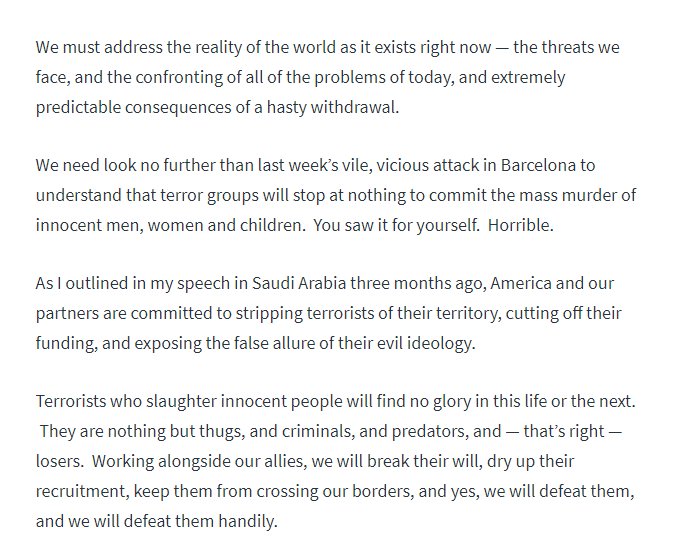 (7) The pro-Pakistan pundits are trying to portray Afghanistan as materially different from Pakistan when it comes to harboring terrorists. This logical fallacy is obvious. 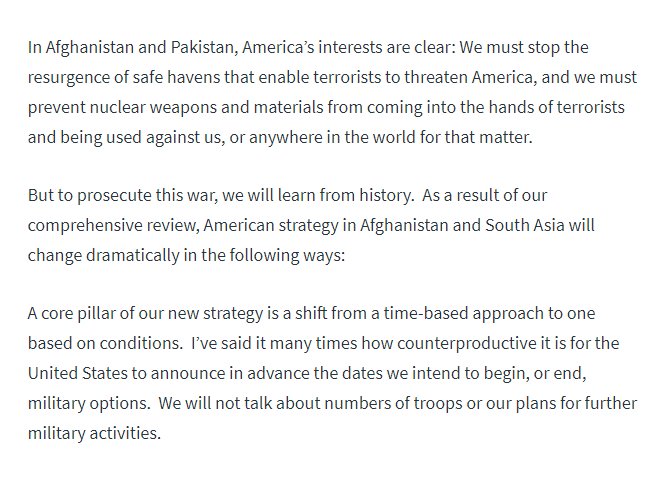 (8) "We are not nation building again. We are killing terrorists". 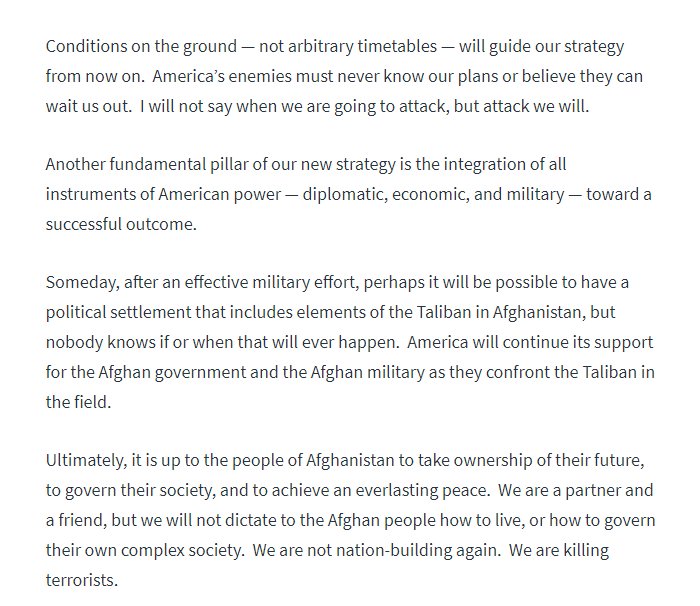 (9) It's not like the President's tweet today about billions spent on Pakistan wasn't foreshadowed very clearly in August 2017. They were angry when he said it then, and they're angry now. Emotional blackmail doesn't work on us anymore. 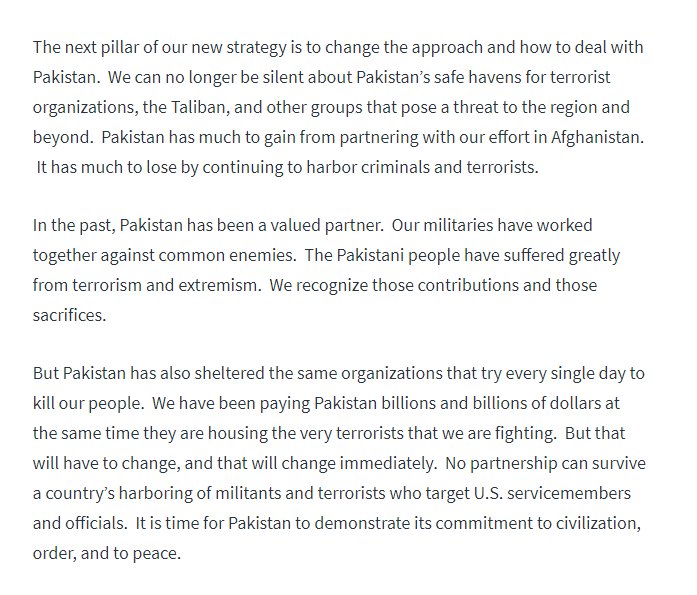 (10) This part of the speech (and the strategy) is very important. From the outset, the Trump administration has recognized the opportunities presented by closer friendship with India, and with Israel, Saudi Arabia, certain other GCC states, Japan, Australia, France and so on.

(11) Why do I disagree with those who claim there is no hope for lasting security in Afghanistan? Because it has never been tried: "Micromanagement from Washington, D.C. does not win battles."

(12) ICYMI, a Presidential action on 12/21/17 took a giant step toward maximizing "sanctions and other financial and law enforcement actions against these networks to eliminate their ability to export terror," & he'd already reaffirmed 7 existing EOs: whitehouse.gov/presidential-a…

(13) "Our troops will fight to win. ... From now on, victory will have a clear definition: attacking our enemies, obliterating ISIS, crushing al Qaeda, preventing the Taliban from taking over Afghanistan, & stopping mass terror attacks against America before they emerge." 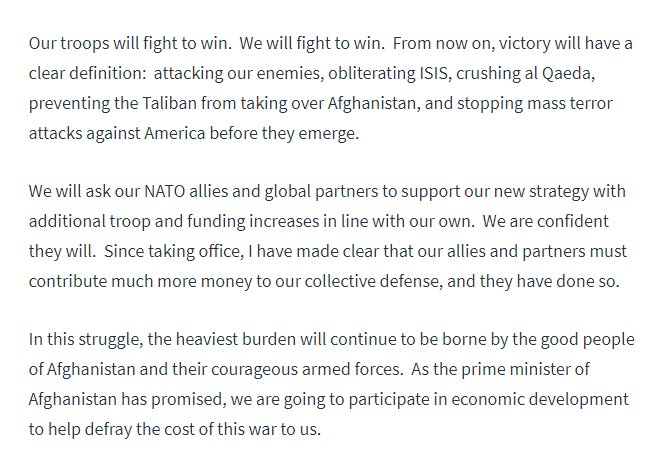 (14) #PrincipledRealism is the key to everything, IMHO.

(15) "In abiding by the oath I took on January 20th, I will remain steadfast in protecting American lives and American interests. In this effort, we will make common cause with any nation that chooses to stand and fight alongside us against this global threat." DJT 8/21/17 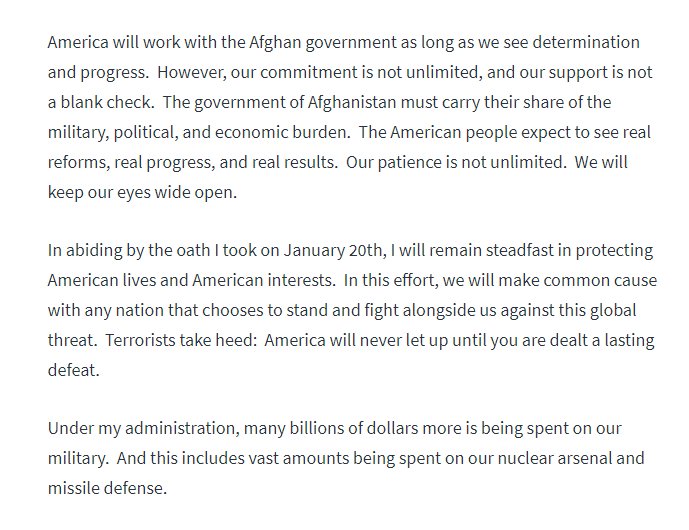 (16) May their sacrifices not be in vain. 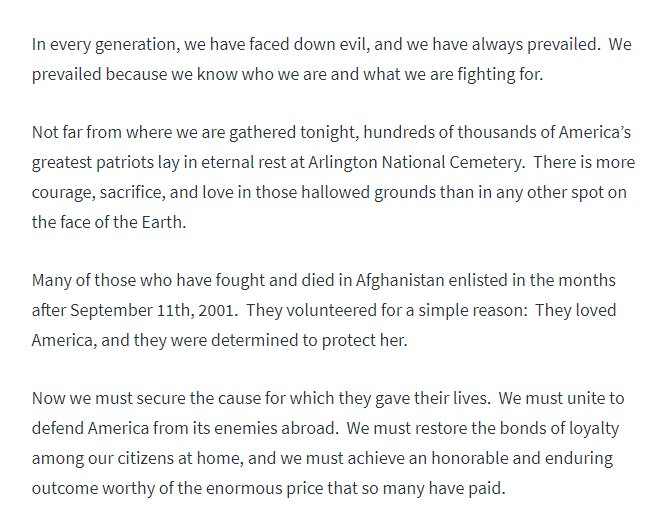 (17) "Our actions, and in the months to come, all of them will honor the sacrifice of every fallen hero, every family who lost a loved one, and every wounded warrior who shed their blood in defense of our great nation."

Land of the free, because of the brave. 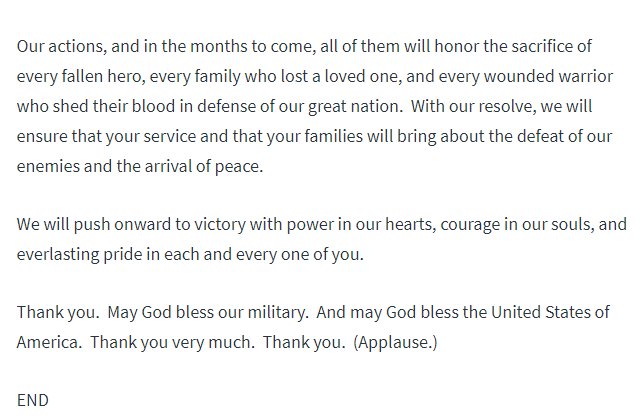 (18) I have observed that nothing this President does in the implementation of his foreign or domestic policy strategies is accidental. The background, rationale and evidence supporting his decisions can be found in his speeches and documents. No need for conspiracy theories. 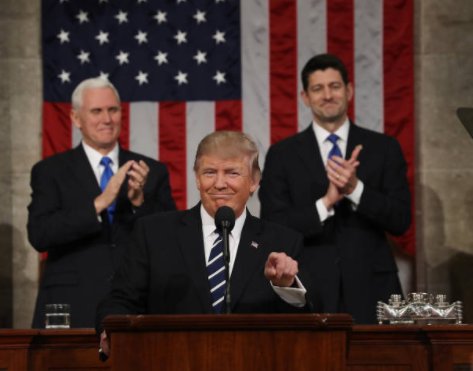 (19) President Trump says what he means, and means what he says. Many world leaders have started to understand this, to their countries' benefit. Pakistan has that opportunity now. 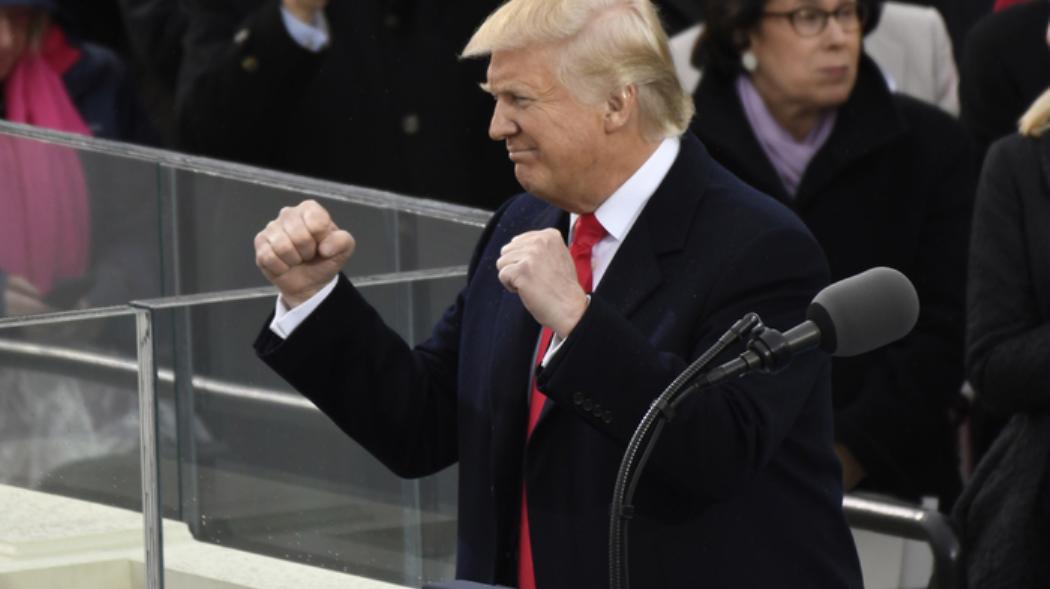 The White House and then the Supreme Court will host the two ceremonies necessary for the Justice to take his seat on Monday.

(2) Brett M. Kavanaugh will soon be the 102nd Associate Justice of the Supreme Court of the USA. He has earned this highest honor throughout his life, inspired by his trailblazing mother, Judge Martha Kavanaugh.

His title for these few hours is Associate Justice Designate.

(3) This statement from the Supreme Court explains the two ceremonies:

A directory of my 10 Kavanaugh threads, and counting. (I know, I surprise myself sometimes.)

#JudgeKavanaugh will soon be #JusticeKavanaugh and the American Republic will be preserved. 🦅

(2) This WaPo reporter is incorrect about the vote being "scheduled for" Saturday. The earliest time a vote COULD be held is Saturday pm. There's no reason not to hold it on Sun/Mon IF we need Daines. I think we won't. Read my 5 tweets about him here:

(3) An excellent short explainer about the fact that Mitch has the votes:

I never planned more than a couple of threads about him this year but, I shoulda known the Dems would try to destroy whoever was the nominee this time.

(2) Like Democrats, I'd already decided how I felt about him before his nomination was announced. I live-tweeted the announcement, which was a great event in itself.

(3) I followed Kavanaugh's progress over the summer and on September 22nd, I finally wrote a thread about the preparations for the all-important hearing on September 27th. It covers the hearing before the next thread started the day after.

(2) Mitch laughing to himself about how absurd it is that he has to push his way through the crowd of reporters on 9/25/18.

(3) Sen Grassley is 85 years old. (Democrats have senators around that age, too.)

Today he had to hold onto a Capitol Police officer to reduce the risk of a reporter knocking him over. This has to stop. Senators must return to being able to walk around freely at work.

Below: FLOTUS at a USAID clinic in Ghana.

(2) First Lady Melania Trump is a natural in this important role.

She's one of those women whose face lights up whenever she is around children. God Bless our great First Lady.

(3) FLOTUS left Joint Base Andrews in her trademark high heels and arrived in Ghana wearing practical flats. She still looks sensational, whatever she happens to wear!

@FreedomFriesInc
Oct 3, 2018
(1) Live tweeting the Senate tonight. @SenateMajLdr has to file cloture by a deadline tonight in order to hold the #ConfirmKavanaugh vote Saturday.

Watch the livestream and videos here:

c-span.org/congress/?cham… …
(2) Cloture in the Senate is a procedural step that you can learn more about at the link below. The senate.gov website is the best resource for learning about Senate procedure and a lot more. Same for house.gov.

senate.gov/reference/glos…
(3) Watching live Senate floor proceedings is boring as hell, as they pass bills for naming Post Offices, & so on. But every now & then, they confirm a SCOTUS judge. And this time, they will affirm our great #BillOfRights #DueProcess & the hard-won #RuleOfLaw. Seriously. 🇺🇸🦅