Jan 19, 2018 • 19 tweets • 11 min read
THREAD: I am putting Advocate Seema Sapra's arguments on the #AadhaarHearings here because it I find it extremely cohesive and think it very important for everyone to read and discuss. The link to her post is above. 1/n
2/n #AadhaarHearing is "framed too narrowly around privacy and there are other more serious concerns about Aadhaar &facts about the Aadhaar biometric identification system that have not been placed before the Supreme Court or are being sidelined by the focus on the privacy right
3/n The focus on privacy in the #AadhaarHearings sidelines the issue "that Aadhaar in its very design and implementation more fundamentally violates the right to identity, to person-hood, to citizenship and consequently the right to life itself."
4/n Here Seema Sapra WARNS that if #AadhaarHearing continues to narrowly focus on #RightToPrivacy, Court will just say privacy is a right with restrictions and will let Aadhaar stay by directing government to frame data protection laws.(And we know how good our laws serve us 😕) 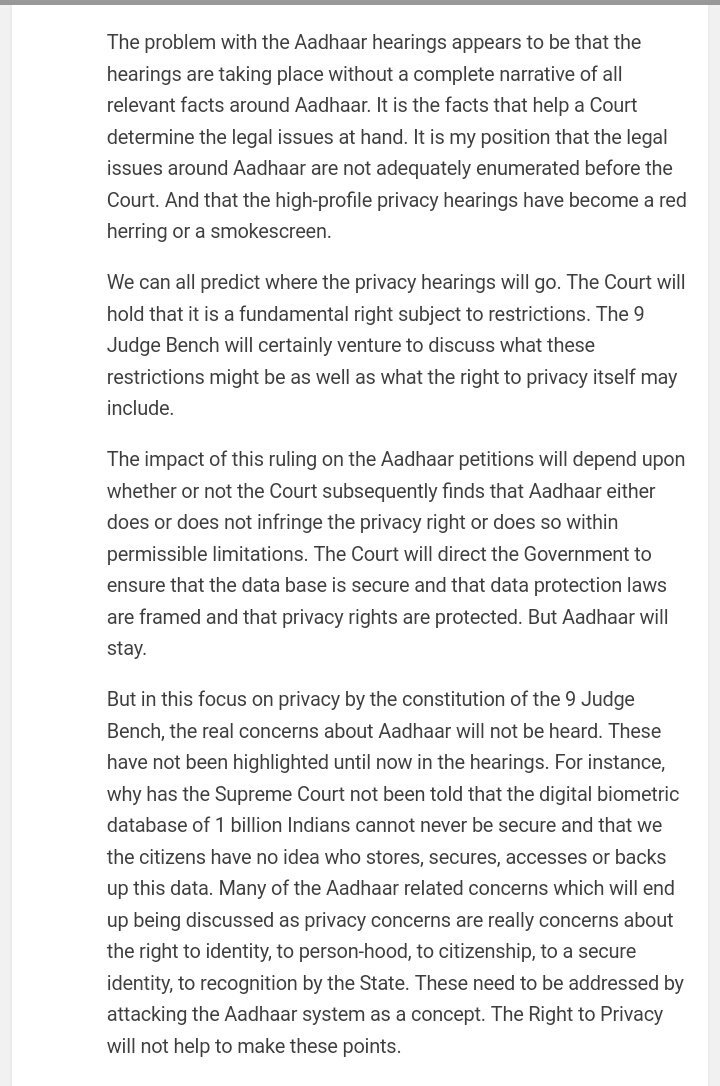 5/n This sign by a ration shop dealer shows the extent to which #Aadhaar has eroded Fundamental #Humanrights & Right to Life in India and should be presented before the #SupremeCourt for the #AadhaarHearings on now. 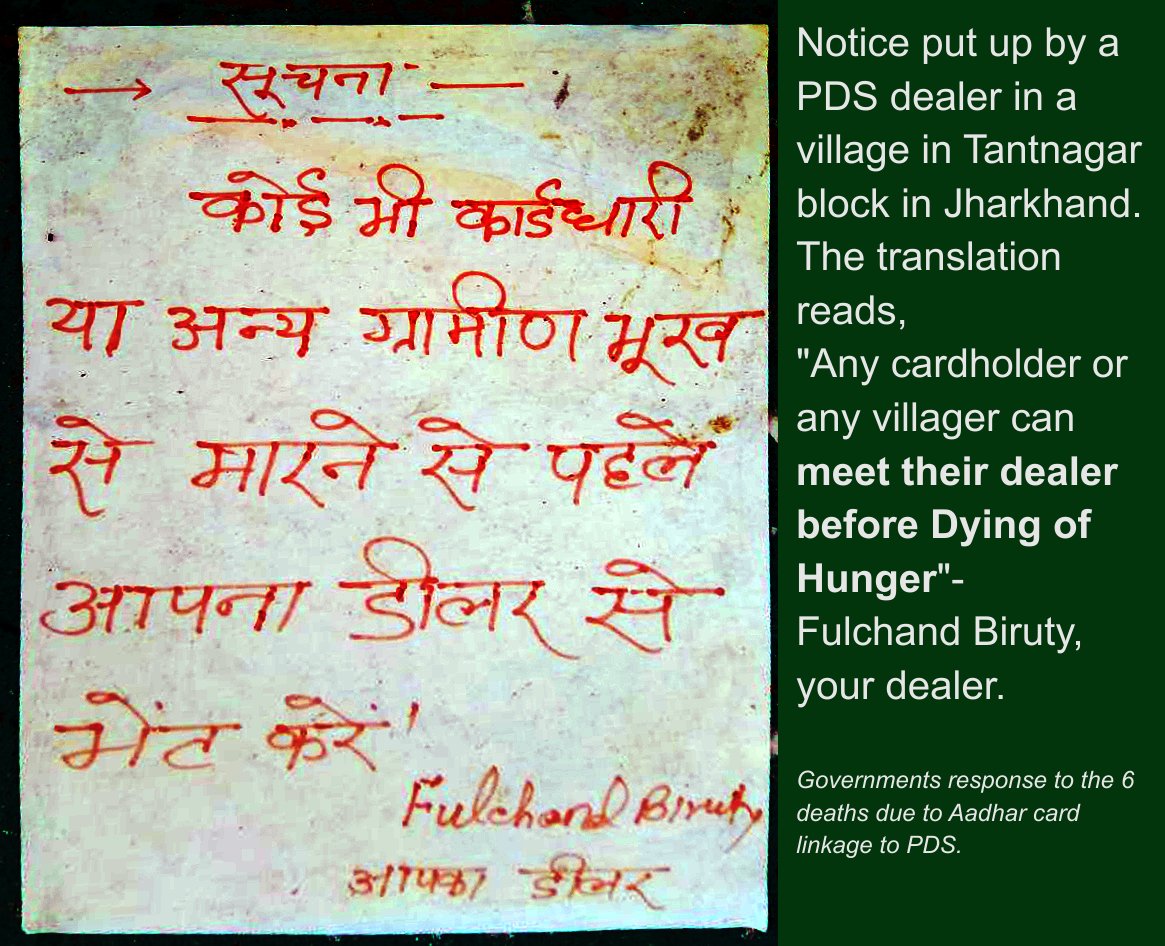 6/n Returning to the thread on the #AadhaarHearing. Here's a response by the Supreme Court Bench that shows how dangerous it is to keep pushing the "Privacy" angle in the Aadhaar hearing. See the argument on top in this thread. m.timesofindia.com/india/even-dho… 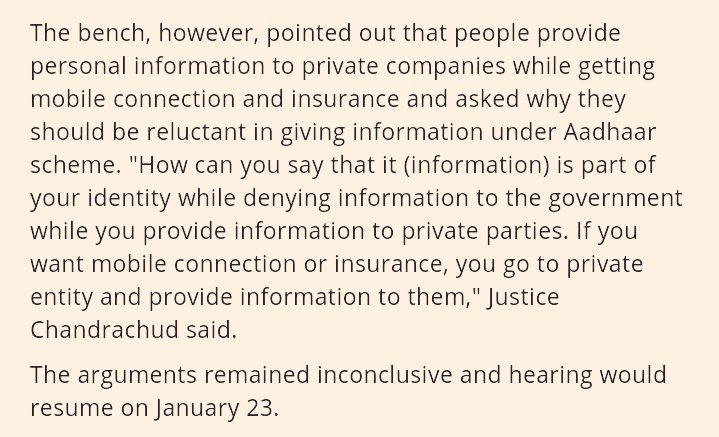 7/n Shyam Divan's arguments on 21Jan for the #AadhaarHearings are focused on Right to Privacy which is a very grey area and gives the Court ample space to argue for "improvement" & continuation of the Aadhaar. See the thread. 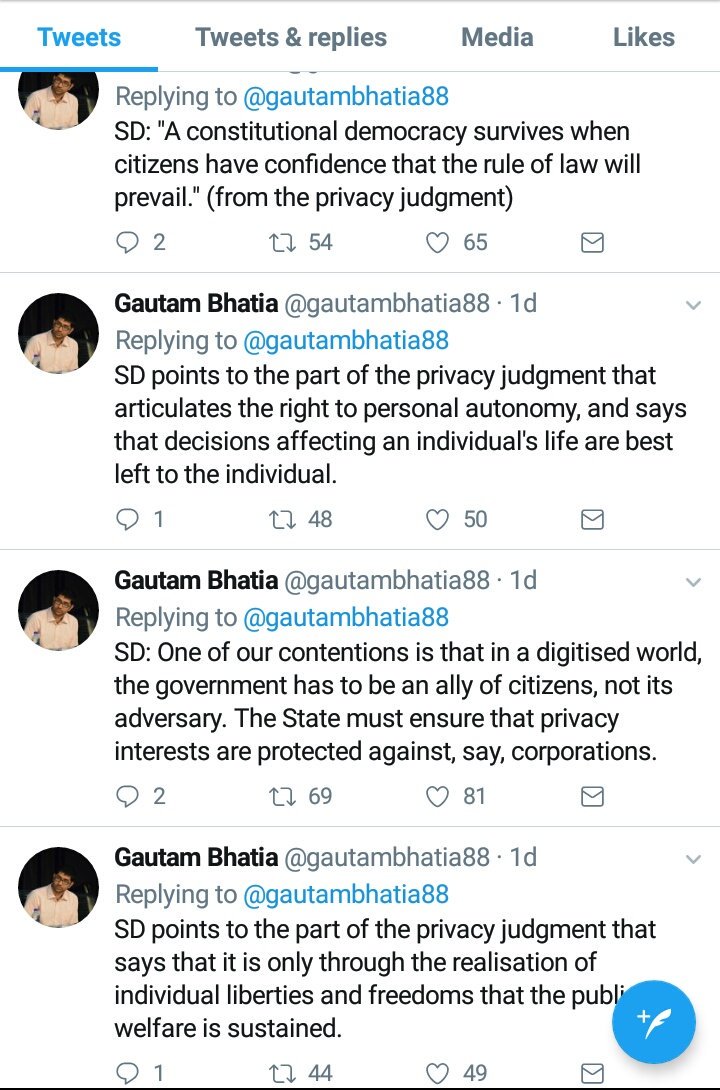 8/n. Today, 23Jan Shyam Divan's arguments in the Aadhaar case continue to focus on #RightToPrivacy. But the fact is people deprived of food & dying of starvation is not about Privacy & Choice. It is about the right to food & the Fundamental #RightToLife which Privacy arg. ignores 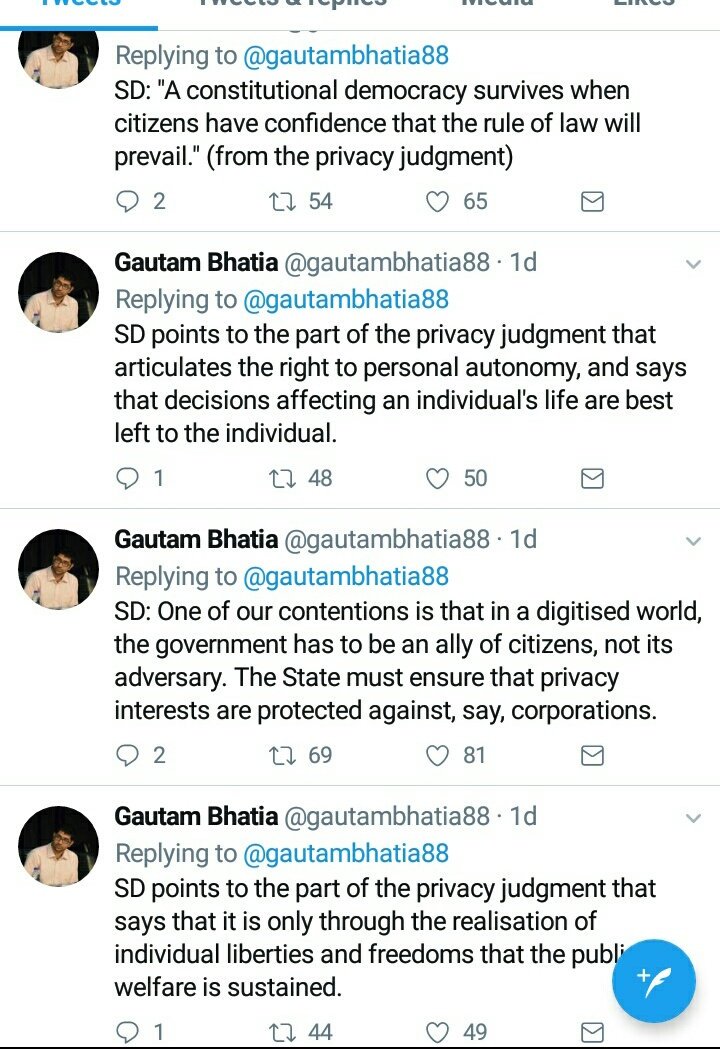 9/n Even with the #RightToPrivacy argument4 #Aadhaar it's unclear why SD did not press with the right to life angle. Eg below is not just about civilrights, but the fact thousands have been declared digitally dead & stripped of all means to live. Their very existence is Denied! 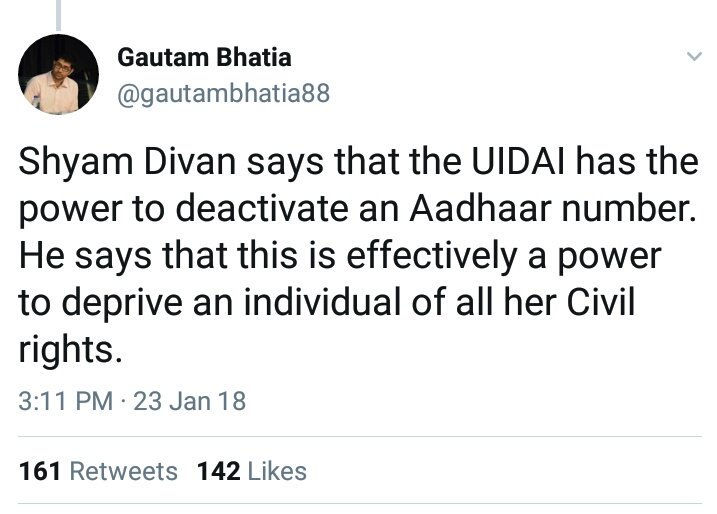 10/n If SD had instead said Aadhaar HAS been used to declare people dead and strip them of their right to exist, there's no way the Court could Constitutionally justify the #Aadhaar. This below is what the issue is

11/n The Supreme Court's job is to test the Constitutionality of the Aadhaar Act. Does it violate the existing FUNDAMENTAL rights guaranteed by the Constitution which the Court is obliged to uphold? SD's arguments skirt these basic Rights & focus on right to Privacy which is grey
12/n This is from 2013 when Supreme Court upheld Aadhaar as a violation of citizens Rights, the PIL by Justice Puttaswamy focused on Art 14 & 21 - Right to Equality & Life respectively. SD knows No Court can stay Aadhaar if it is a threat to RIght To Life! tehelka.com/2013/09/aadhar…
13/n #AadhaarHearing. Another eg of danger of using "Privacy" as an argument. In this exchange below, SD argues leaked data which SC will just say make law for. But why not focus on those pension exclusions? Court itself is accountable to Constitution 2 uphold Fundamental Rights 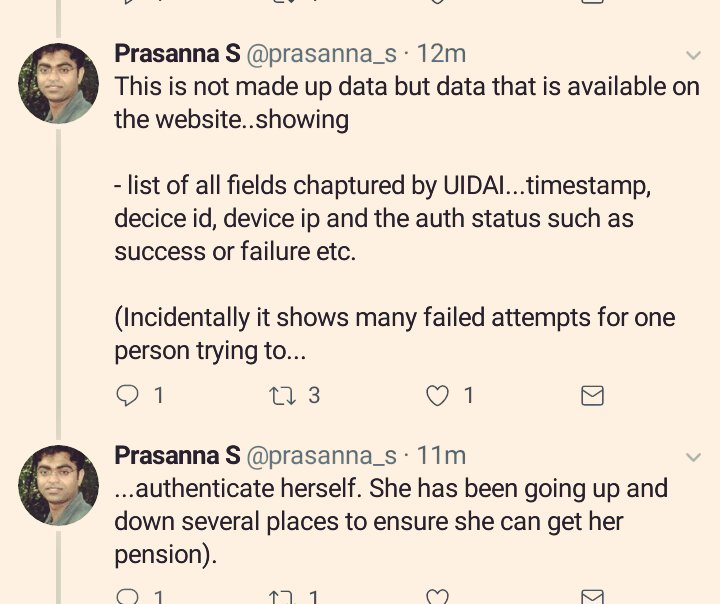 14/n. Will the Supreme Court answer these questions about Aadhaar which are VERY important? Or are they just rhetorical for courtroom drama? Will the petitioners list these questions for the judges so we can seek the answers in the final judgement - hopefully is not a secret doc 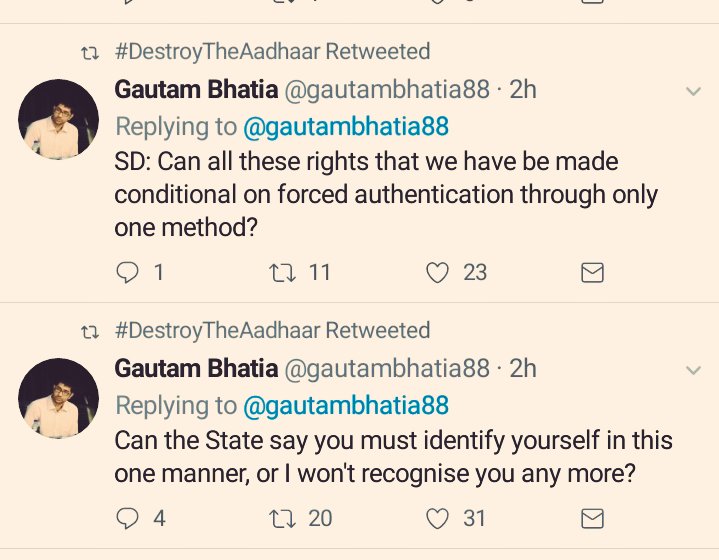 15/n The #AadhaarHearing should be focusing on the Constitutionality of the #AadhaarAct. As it violates MOST Fundamental rights under the Constitution, the SC is legally obliged to strike it down under Article 14. Focus on privacy allows the SC to sidestep this obligation. 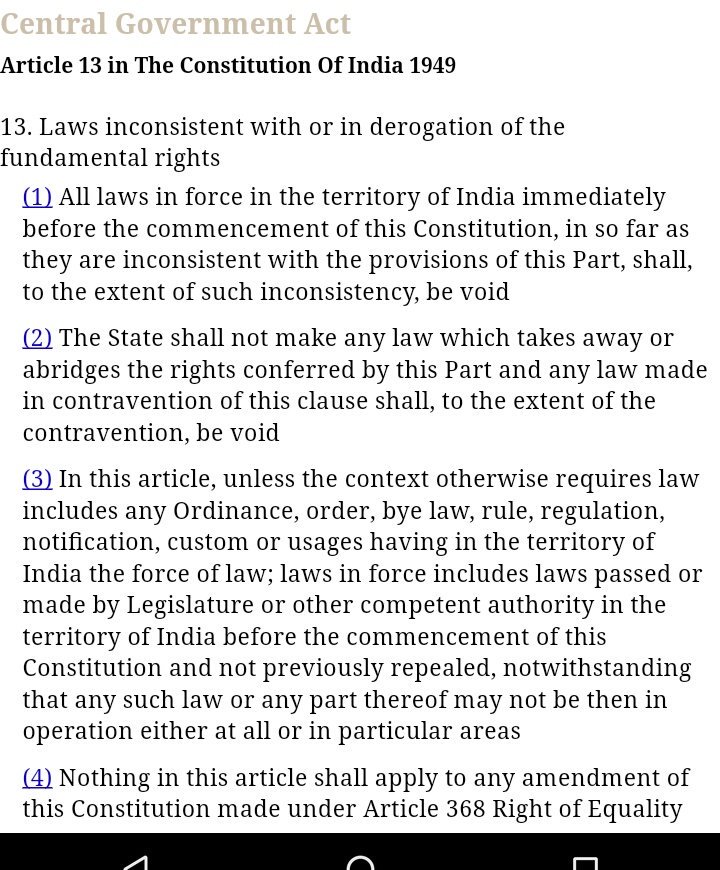 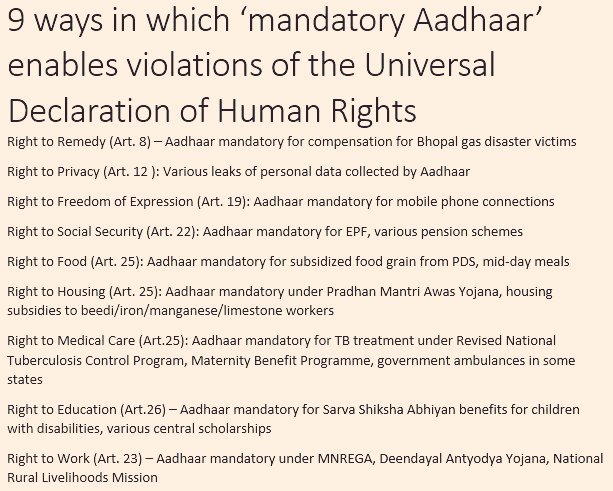 Sorry, that should be "strike it down under Article 13" - defined in the left pic.
16/n. Indians need to know that data pertaining to Aadhaar based violation of people's basic right to FOOD & PENSION which govt claims as savings has been put before the Supreme Court. Still why do judges claim "savings" citing wrong info in IMF paper?

17/n Gopal Subramanian at the #AadhaarHearing makes powerful arguments on how Aadhaar is Unconstitutional & violates Fundamental #HumanRights. So why this call for extending Aadhaar linking deadline? Why not to #DestroyTheAadhaar? 🤔

@Rita_Banerji
Aug 8, 2018
11 signs that the government is gaslighting all citizens in India with #Aadhaar.

Do READ this and think about it! 👇

2/ #Aadhaar is system, govt & pvt co. are using to enslave Indians by gaslighting. #Gaslighting is a tactic in which a person or entity, in order to gain more power, makes a victim question their reality. Govt has
brainwashed us to question our OWN identity. Am I who I say I am?
3/ Since gaslighting is a tactic of abusers, dictators, narcissists, and cult leaders, the goal of using #Aadhaar as a #gaslighting tool is by now pretty clear. It is done slowly, so the victim doesn't realize how much they've been brainwashed.
Read 4 tweets

@Rita_Banerji
Jul 12, 2018
UIDAI forcing banks to ONLY hire Deloitte (a UK) firm for audits, giving it a monopoly, pay it ₹1,94,700 a unit is for the mandatory internal security audit for Aadhaar & also pay for the travel, boarding and lodging of Deloitte officials!

The #Aadhaar CIDR is neither w/UIDAI nor govt of India but is owned by a pvt US agency that is contractor for the FBI & CIA. Deloitte, the ONLY agency allowed by UIDAI to audit Aadhaar cybersecurity of Indian banks, also has an FBI connection! www2.deloitte.com/us/en/pages/ab…

Ti put his thread in context for those of you who are unfamiliar about what has been stated by army veterans before the Supreme Court about how India's Aadhaar biometric data base is practically in the hands of the FBI & CIA.

#1. Classification: People are divided into 2 groups. Those who have #Aadhaar (the good people). And those who don't have Aadhaar (the bad people). We don't have this classification for any other ID in India.
#2 People are forced to self identify using #Aadhaar as a single centralized biometric ID, for everywhere they do, everything they have. It's linked to birth, death, marriage, ration, pension, bank, property, school, online shopping, app cab. This happens ONLY in a fascist state
Read 9 tweets

@Rita_Banerji
Apr 12, 2018
Just like I did with the Delhi bus gang rape & murder, I am following the investigation on #Asifa's case closely. And like the Delhi police, the J&K police have mucked this up too. This chargesheet is full of holes! firstpost.com/india/kathua-r…
1/ So according to this detailed investigation, #Asifa was repeatedly sedated as she was raped over 7 days. And for some reason, the strip of tablets she was drugged with was, as per police report, "kept under a heap of garbage near an electric pole outside the Devisthan." What?
2/n Report says accused "washed the clothes worn by" #Asifa at the time of her death "to remove the clay and blood stains/sperm" before forensic tests. Did they put it back on her? Do forensics confirm this? And what about forensic report on fluid, hair & evidence on & in her?
Read 45 tweets

2/. A network of wedding scam artists, where women would make fake #Aadhaars ids (so they couldn't be identified), marry unsuspecting men, rob them and then flee. m.bhaskar.com/news/MP-IND-HM…
3/. In UP, a family got an #Aadhaar made stating their daughter is 18, when she's actually 11 years, and got her married. The girl reported her family! Or we'd never catch this #childmarriage. Govt says #Aadhaar is the "Voice of Truth." An absolute must! timesnownews.com/india/article/…

A 2009 report from #MSF on the systemic violence against #Rohingya refugees in Bangladesh msf.ca/en/article/ban…