Discover and read the best of Twitter Threads about #inlimbo

the3million
@The3Million
1/ Really? Do we need a video game playing with the worst fears of the 3.6m EU citizens in the UK? This is just tasteless and disgusting. @BBCClick should be ashamed to even give this a platform.

2/ EU citizens have been #inLimbo over their #citizensrights for the last 2 years. Confronted with dehumanising language on the front of newspapers, on social media & on the streets. Do we really need a game that is set around rounding them up in Ghettos & used as slave labour?

3/ The game is meant to be satirical. Satirical? Being left #inLimbo over #citizensrights is definitely not a laughing matter to the 3.6m EU citizens in the UK.

Matthias Eberl 🇪🇺
@eberlmat
Was: "You will automatically be granted indefinite leave to remain and treated no less favourably than at present."

Now: "You will not be turfed out."

We need a law that guarantees our #citizensrights, not verbal reassurances.

They have jobs, mortgages, businesses, families.
They are at home here.
They have lives.

They can't just be 'turfed out'.

Which other UK politicians have parents, spouses and/or children that belong to @The3Million?

the3million
@The3Million
Sadiq Khan: London planners must prepare for no-deal Brexit
London mayor said the government was dragging its feet and leaving businesses and EU citizens #inLimbo by refusing to guarantee their #citizensrights in the event of a no-deal Brexit

theguardian.com/politics/2018/…
"The Gvt's offer of settled status relies on a successful outcome of the Brexit negotiations,” Khan said. “If talks were to break down, the 3 million EU citizens living in the UK [..] would have no guarantee that their rights to stay and work would be protected.
"Businesses regularly report the difficulty they face in getting the talented workers they need, and to now threaten the Europeans they currently employ is completely and utterly reckless." London mayor @SadiqKhan continues /end
Read 3 tweets

the3million
@The3Million
1/ @ukcen_admin are right. Settled Status has become law and will be with us whether there is a deal or no deal with the EU. This is good news as their is now a provision for a legal status post Brexit whatever happens. But...
ukcen.co.uk/settled-status…
2/ it will be not settled status as promised. Without a deal you might also call it Settled Status light. Or Settled Status in name only (SSINO). Yes, EU citizens can apply for a status that will allow them to stay, work and access social security (eg. NHS) as before but...
3/ all bilateral elements of Settled Status will fall away without a deal. This includes coordination of pensions, disability allowances and other benefits that are currently coordinated & paid cross border. And...
Read 11 tweets

Rhena E.
@tempora_magda
I am #OneOfThe3Million
3.7M Europeans in #BrexitBritain have intentionally been kept #inlimbo about their future lives here for 2 years
The state of #HumanRights as set by @ukhomeoffice for #Immigrants should send shivers down our spines
#highlyskilledmigrants #windrush

"Repeated warnings about the developing Windrush scandal were made over the course of several years to both the Foreign Office and the Home Office but no action was taken" by @ameliagentleman
amp.theguardian.com/uk-news/2018/j…
As #OneOfThe3Million I have become aware how some people in our society are subject to a catalogue of horrendous fees as well as harsh, illogical & often frankly inhumane rules @ukhomeoffice applies without any consideration of their circumstances & their established lives here
Read 7 tweets

Matthias Eberl 🇪🇺
@eberlmat
The disregard of the British government for the wellbeing and the #citizensrights of people lawfully residing in UK and EU27 has reached breathtaking proportions.

Plus their families and partners.

"These are people who have built a life here, and who in turn have made a massive contribution to the life of this country."

1/
"I want to give them some reassurance, because we have absolutely no intention of asking anyone to leave who has the right to remain here."

Alexandrine Kántor
@Alexa_Kantor
All medias, when they talk about @The3Million EU citizens living in the UK and #Brexit, they talk about families and how they can become very vulnerable.
But my story is not covered by this situation and is not unique.
We're vulnerable without a family to support us. Thread 1/20
I came in the UK in Oct 2013 to follow a boyfriend that I had by that time and because I wanted to leave France.
I thought that would be a great opportunity as lots of french young professionals want to go to the UK. That was my chance. 2/20
I was an Electrical Engineer in France with an equivalent of a Bachelor of Science in Electrical engineering. I did not know the English language very well and most important, the British Standards. But I did my 50% of my Bachelor in Germany so I thought I'll be alright. 3/20
Read 21 tweets

the3million
@The3Million
1/ Following the delay of the immigration white paper to Autumn this year the @CommonsHomeAffs has written to @AmberRuddHR asking some majorly important questions. Affecting all EU #citizensrights. 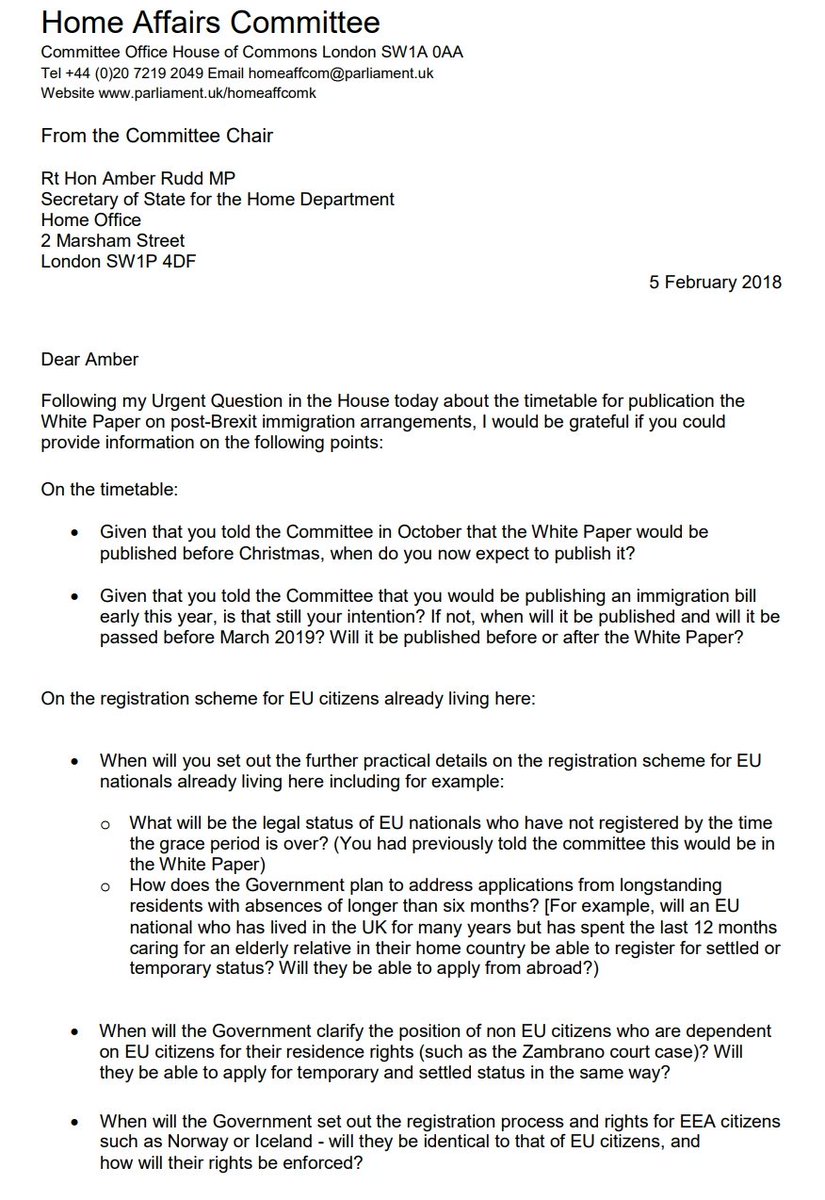 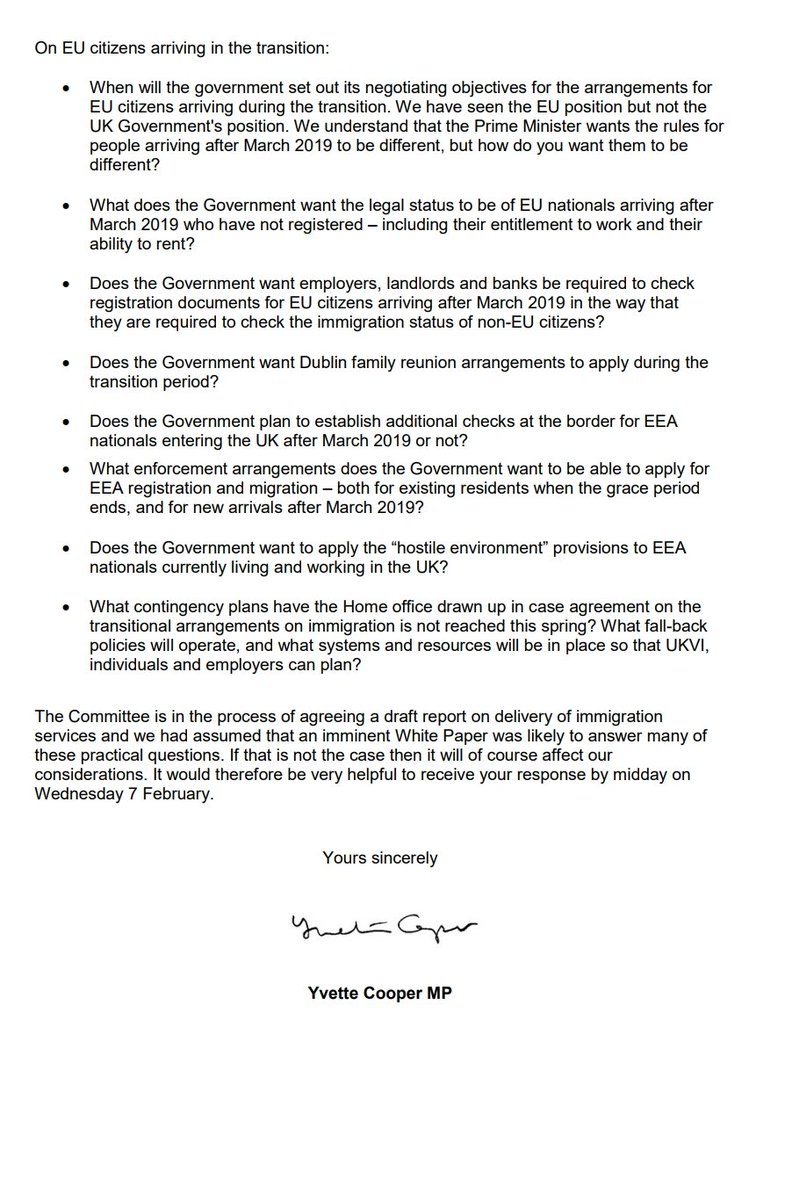 2/ We wonder too what the legal status will be for those unable to register during the proposed Grace Period. Especially the most vulnerable could struggle with registration which is planned to be online only.

3/ Life is not as straight forward as agreement makes it out to be. Will longstanding residents currently absent from the UK qualify? Will they be able to apply from abroad?

Pascal Jacquemain❄️️
@jacquep
I was accused yesterday, not for the 1st time, of being too worried about what's in store for us @The3Million
Even though my life is @InLimboBrexit , it has not stopped. We must carry on. We can't just tell our landlords who want to sell
"sorry but I don't know what will happen to me". We have to decide where to go, whether to rent or buy, whether to buy this house or another
Read 8 tweets