The first significant use of #DemExit on twitter appears 2 have been around May 31st 2016 & the first use by known IRA accounts was July 23rd. Of note is this occurred less than 24 hrs after Wikileaks released 22000 DNC emails that had been previously hacked by Russian GRU agents

It is noteworthy that the Russian IRA trolls were able to quickly mobilize accounts to use the #DemExit immediately after Wikileaks released the hacked DNC emails .. like this example. Google search data also shows July as the first spike in #DemExit

Additional #DemExit spikes occurred on Sept 17 & Oct 7, 2016. Oct 7th is noteworthy because its when Wikileaks released John Podesta's hacked emails soon after the seemingly damaging Access Hollywood tapes & the day US Intelligence confirmed Russia was behind the earlier DNC hack

There was a fair amount of overlap between IRA tweets promoting Jill Stein's candidacy and the #DemExit hashtag. On June 22, 2015 Dr. Jill Stein announces her bid for President running as the Green Party candidate. #infosec #osint #opsec

July 31, 2016 appears to be the first big spike in pro-Jill Stein activity by the IRA trolls and subsequent spikes on Sep 17, Oct 6 and election day. Unlike the strictly #DemExit tweets the pro-Jill Stein tweets seemed far less coordinated to major events like Wikileaks dumps.

Both campaigns however spiked around Sep 17th, 2016 & its unclear whether this was planned or not. The only major events we could find were the pipe bombing in NJ, explosion in Chelsea neighborhood and mall stabbing in Minnesota. So obviously some terrorism fear was at play

What is clear is that Russian trolls from the Internet Research Agency were attempting 2 promote the narrative of voting for a 3rd party candidate like Jill Stein or not vote at all. They also continued 2 stoke #BLM unrest & even combined topics like Jill Stein #BLM and #DemExit
It should also be noted that these findings are based only on publicly known IRA data. Its our feeling that we are still only looking at tip of the iceberg. In fact some of our recent #Hamilton68 data goes back to 2016 including this accnt which is currently live #opsec #infosec

@SlickRockWeb
Oct 7, 2018
I realize the #justicekavanaugh confirmation has been a hyper-partisan issue (that by itself is very concerning for a Supreme Court nomination) 4 wks now but why have the #Hamilton68 Russian influencer accounts spent so much oxygen on this? Like #BeersforBrett ?

We looked at our roughly 310 Twitter accnts that we reversed engineered as #Hamilton68 accnts (described at dashboard.securingdemocracy.org) and we created wordclouds 4 various segmented categories of our Hamilton68 accounts over the past wk & highlighted them related 2 Judge #Kavanaugh
The first set we looked was our set of #Hamilton68 accounts that focus on Russian geopolitics. 14658 tweets were analyzed over a period of a week and #kavanaugh was the main hashtag promoted as it related to Judge Kavanaugh

@SlickRockWeb
Aug 7, 2018
According to some recent data by @conspirator0 who analyzed the Russian IRA Twitter data dump the conspiracy hashtags of #pizzagate, #pedogate, #qanon ect appear 2 have first been used by these accts in a measurable way in Nov 2016 & really ramping up in Nov 2017. #infosec #psyop

Here are our previous threads on the fake propaganda #walkaway campaign

. Its interesting that #walkaway seems 2b slowly dying in propaganda value to the Russian influencer #Hamilton68 accounts. #infosec #psyop

@SlickRockWeb
Jul 2, 2018
So for the first time in quite a while a newcomer hashtag had top spot on the #Hamilton68 Dashboard -- #walkaway. We remembered seeing this hashtag in the past few weeks but didnt really know what it was or follow up on it. #infosec #opsec dashboard.securingdemocracy.org

The background story on this hashtag #walkaway is a little strange & the number of bots, trolls, & fake testimonial promoting this hashtag is even stranger. Here's an example of a completely fake tweet highlighted by @daveweigel #opsec #infosec

We decided to look retrospectively at our own reverse engineered #Hamilton68 data. This is a wordcloud of 22893 tweets from our main Hamilton68 troll subset going from June 24th until now & #walkaway takes the #1 spot. #infosec #opsec 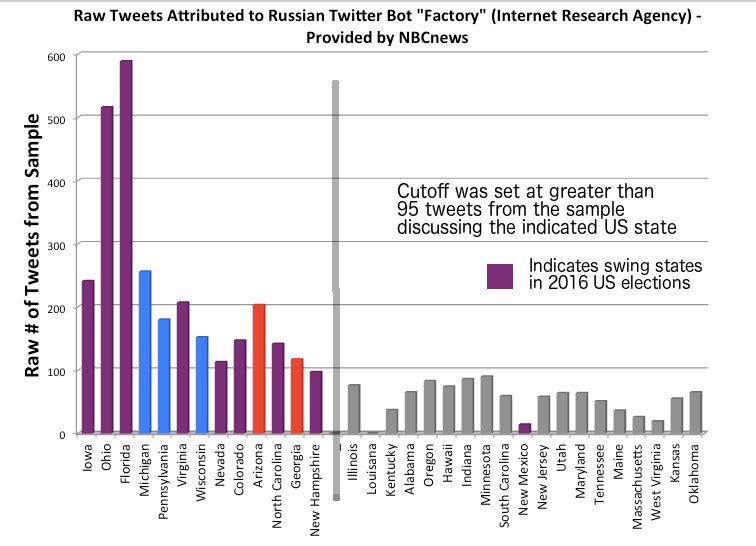 As you can see there was a pretty clear grouping of purple states. This was an initial quick and dirty analysis and it doesn't take into account that bigger states would of course likely have a higher # of random tweets about them.
So in this next graph we normalized the # of tweets mentioning each state to the states electoral number thus normalizing the tweet frequency to the weight or importance of the state in the 2016 elections. Again a good grouping of purple states. #mueller Internet Research Agency 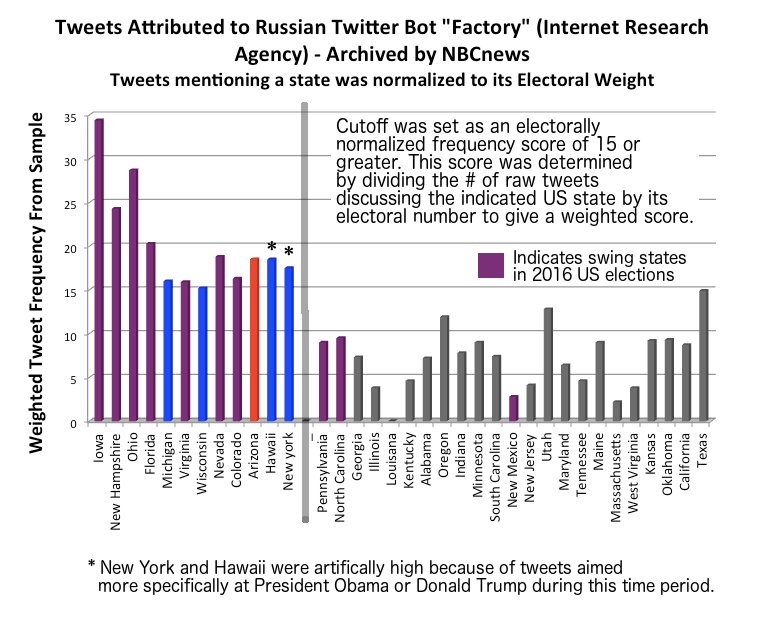