Dec 30, 2017 • 12 tweets • 6 min read
Yesterday, I linked to @CharlesPPierce's piece arguing that @realDonaldTrump is exhibiting serious cognitive decline. I said he has dementia. I invited you to share your stories of loved ones with similar problems, & hundreds of you did, movingly.

But some of you also pushed back, arguing that it was irresponsible of me to make that armchair diagnosis, because it stigmatizes people with mental illness. It's an important critique, on a crucial question in American politics, so let's talk about it now. #CripTheVote
Last year, disability rights organizers @SFdirewolf @AndrewPulrang & @GreggBeratan created the hashtag #CripTheVote to mobilize disabled voters and talk about disability issues. So we should that hashtag here.

rewire.news/article/2016/1…
Alice, Andrew, Gregg and other activists have been living with, thinking about, and working on these issues for far longer than I have. So I approach this conversation with gratitude for their leadership and perspective & with humility and a willingness to be convinced.
I will lay out my perspective here, and then I am very eager to hear from disability rights advocates, health professionals, ethicists, etc. (I've only been thinking about these particular questions for 24 hours, so please read my thoughts with a bunch of salt.) #CripTheVote
There has been a lot of discussion about the president's mental health this year. Let me try to summarize & orient.

I see a number of questions:
1.What is Trump’s mental health status?
2.Who has the right and/or obligation to ask this question publicly?
3.Is it important? Why?
On one end of the spectrum is @duty2warn, an association of mental health professionals advocating Trump be removed under the 25th Amendment as psychologically unfit. Obviously they believe we should be asking/answering this question, because Trump is a danger to the country.
On the other end are @SFdirewolf @AndrewPulrang & @GreggBeratan. I don't want to mischaracterize their arguments, so I will let them speak for themselves. But, I believe they think that discussing Trump's mental health is some combo of irresponsible, stigmatizing, & unnecessary.
Somewhere near @duty2warn on the spectrum are people like @BandyXLee, who recently published a collection of essays about Trump's mental health.

amazon.com/Dangerous-Case…
Lee argues that she has not violated the American Psychiatric Association's "Goldwater Rule" prohibiting the diagnosis of people without proper examination. It is an "assessment" of the level of danger to the American people, not a "diagnosis" of him.
I find Lee’s distinction a bit precious. I haven’t read the book yet, but the excerpts in the Post suggest to me that, although her book may not have “diagnosed” Trump in the professional sense of the word, it has done so in political/practical terms.

washingtonpost.com/news/book-part…
I think that a good thing. I think @BandyXLee has done a service to the country by moving this conversation forward in a responsible manner.

@AdyBarkan
Oct 7, 2018
2 years ago today, @rachael_scar and I walked into the neurologist's office. She was carrying 4-month-old Baby Carl on her chest.

We walked out an hour later with my death sentence. ALS would paralyze and then kill me, and there wasn't anything we could to stop it.

How would we persevere? What we do with the short time I had left? How could we find hope in the dark?

And yet, this journey has been better than I feared. On most days, I am happy.

@AdyBarkan
Oct 3, 2018
Do you want Brett Kavanaugh impacting your life for the next 30 years? If not, you have three days to #CancelKavanaugh.

Here are 5 things you can do. I promise you will be glad you did.

(Please RT to help save our democracy.)
1. Show up at a vigil Wednesday evening.

There are vigils happening all around the country. Find one near you, bring some friends with you, alert your local TV station, and tweet out some photos.

We all saw what a huge impact @AnaMariaArchil2 had, simply by showing up to the Senate and telling her story. She wants you to join her. 9 am in the Hart Senate Office Building.

There are buses from major cities. bit.ly/WECANWIN
Read 6 tweets

Reject issue by issue silos & instead go for meta themes.

70: Trump is enriching the rich and powerful at the aexpense of ordinary Americas. (Trumpcare, tax scam, gov corruption all fit here)

30: Trump is dividing Americans from eachother & we can't let him do it. (Attacks on immigrants&muslims fit here, so do voting rights, mass incarceration, civil rights, lgbtq, metoo. This is actually all a pretty dopy way of framing things but the polling suggests it works.
“These are of course both framed in the negative but I'd also split these to be framed in the positive at least 60% of the time. I think people's feelings abt trump are pretty well baked so actually i'd say these should be mostly framed in the positive with the contrast assumed.”
Read 5 tweets

@AdyBarkan
Jan 29, 2018
Like usual, @realDonaldTrump is attacking smart black people who disagree with him. Today's installment? Saying that Jay Z and @VanJones68 should be grateful to him for low black unemployment rates.

@shawnsebastian has a full rebuttal here. I'll give you the abridged version.

First, Donald Trump gets zero credit for the strong economy. Take a look at these 2 charts. The recovery started 8 years ago (under a Black president).

And it was propelled forward until now because Janet Yellen insisted on pursuing true full employment. 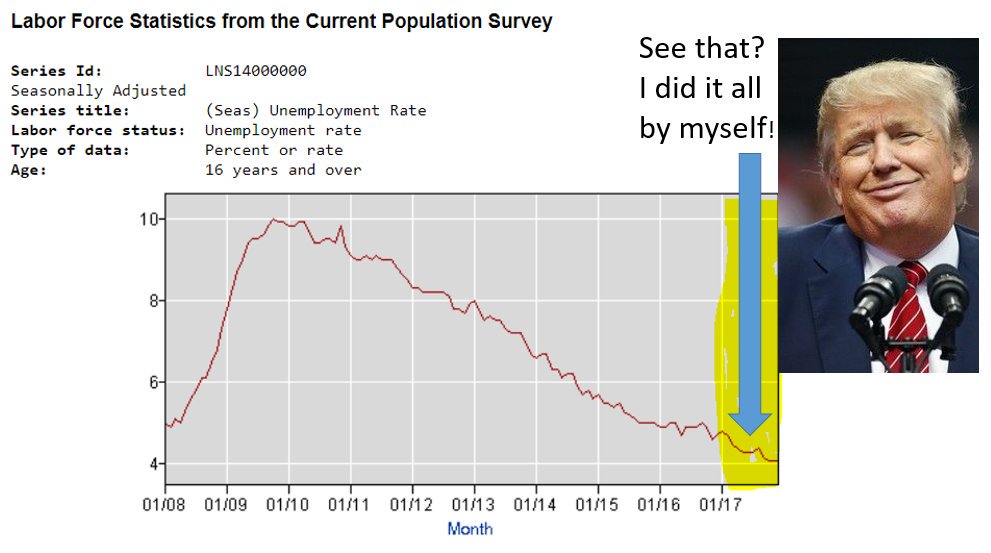 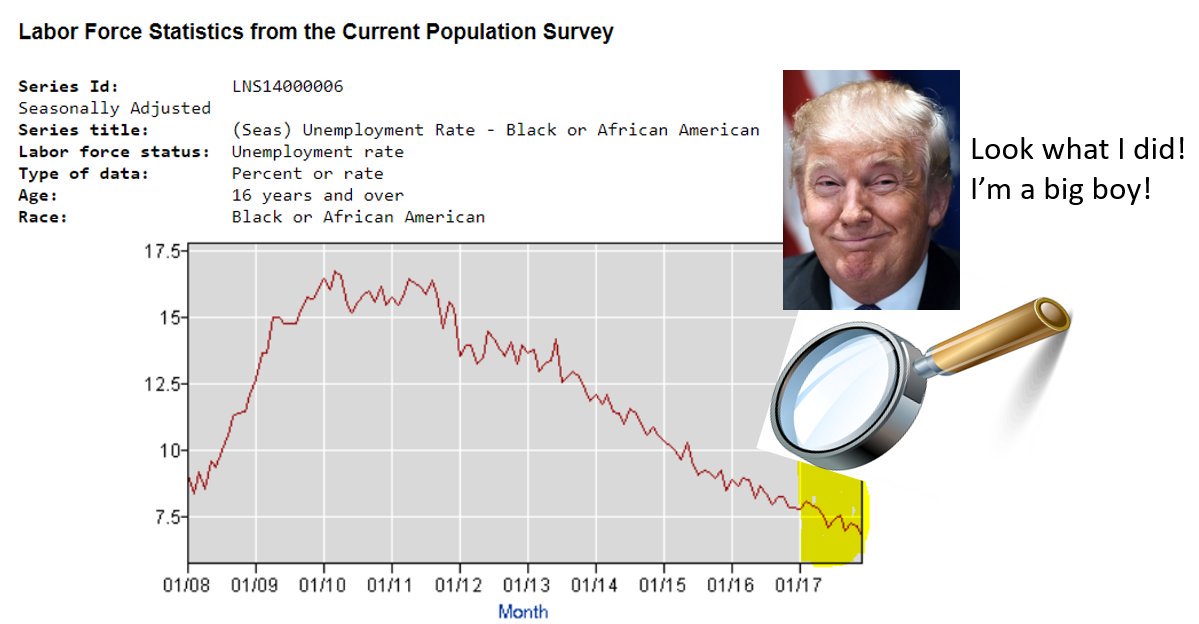 Yellen was most successful Fed chair in history. She pushed unemployment down & kept inflation low. But Trump replaced her with a less qualified man because he wanted to make his mark on the Fed.

So, his taking credit for this economy is really rich.

*This* is why we launched Fed Up. Full employment is the most powerful public policy that exists for improving lives.

mobile.nytimes.com/2018/01/13/bus…
By empowering workers to quit if they want, full employment:
Raises wages,
reduces inequality,
combats racial discrimination,
promotes gender equity,
reduces sexual assaults/harassment,
stabilizes schedules,
facilities unionization,
reduces depression&suicide
Enhances skills.
I know there's no such thing as a panacea, but I think that's a pretty unparalleled list of benefits that come as a result of one policy intervention!

@AdyBarkan
Dec 31, 2017
Some end-of-year thoughts about this moment, this movement, power, race, money, and what we need to do together over the coming 10 months. Please read it and retweet it if it strikes a chord with you. And, white people, *please* open your wallets before midnight tomorrow.
This year has been exhausting. For all of us. The racism & xenophobia has been out of control. To me, as a white person, it has been offensive & shocking. But you know what? Those feelings are negligible compared to what it's felt like to be on the receiving end of the hatred.
One example is the disparity between how @lsarsour and I get treated on Twitter. I have received overwhelming positive support. Linda receives daily waves of hatred, racism, and sexism. And death threats. She needs a security detail to get around her beloved Brooklyn.
Read 15 tweets