Feb 14, 2018 • 11 tweets • 3 min read
Long before current traditions of #ValentinesDay sprang forth, spymasters worldwide have used the amorous arts to obtain secrets from their enemies. Known as “honey traps” or “honeypots,” rivals ensnared their adversaries in a game of love, lure, & lies.

bit.ly/2suXBoG
One of the best known seductresses was Mata Hari, a Dutch exotic dancer convicted of spying for the Germans during WWI. She was accused of being a double agent & obtaining intel by seducing prominent French politicians & officers. She was tried, convicted & executed in 1917. 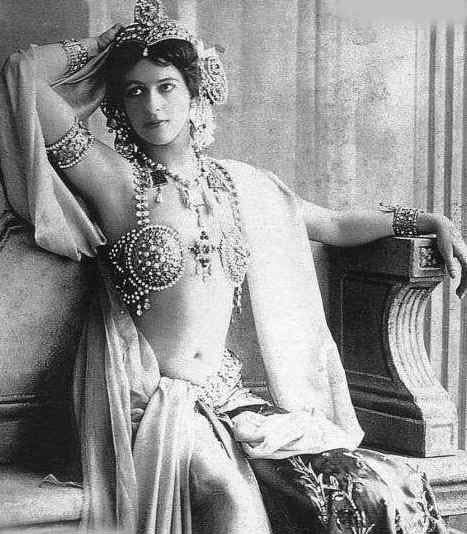 While most think of female temptresses when they hear the term "honey trap," men too have been used as honey traps to steal secrets. For example, in West Germany during the height of the Cold War.
After #WWII many West German women took jobs in business, government, parliament, military, & intel often having access to highly classified secrets. Thus they became targets for East German male spies interested in only one thing: secrets.
These men were nicknamed “Romeo Spies.”
Romeos were trained in espionage, given false identities, & sent to West Germany. Once there, they identified a potential “Juliet” with access to the info they were after. They created a chance encounter, began an affair, & finally asked the women to pass them secrets.
Romeo spies were warned not marry their assets even if they developed genuine feelings for them (which many of them did) because West German authorities conducted background investigations of anyone seeking marriage to a government employee with access to classified material.
Initially, most women were naïve about the true intentions of their Romeos; however, as the relationship developed, Juliet began to suspect that her Romeo was working for the other side. Most were not shocked when they were asked to spy for their men.
By this point in the relationship, some women had fallen in love & agreed to spy to keep their affairs going; some relationships lasted for decades. For those who fell in love with their Romeos, their espionage careers ended when the affairs did.
While many women terminated the relationship when asked to spy, others fell in love not with their Romeo, but with the excitement of espionage. Their Romeos were just part of the process.
40 women were prosecuted in West Germany over the course of the Cold War for committing espionage. Many hearts were broken, including those of several Romeos who truly loved their Juliets. Several couples fell genuinely in love, married, & started new lives.
Find out how to spot a Romeo, learn about the man behind the Stasi program, & read the stories of the:

Check out the full story:
bit.ly/2suXBoG

@CIA
Sep 14, 2018
Today we released the 2nd set of declassified material in a series of 6 releases of the daily intelligence report President Harry Truman received from CIA & our predecessor organization, the Central Intelligence Group, between 1946 & 1951.

@CIA
Sep 11, 2018
A rust-colored steel column recovered amid the rubble of the World Trade Center after the September 11, 2001 terrorist attacks is a permanent memorial at CIA Headquarters.

The 9000 lb, 17’6” steel column was retrieved from World Trade Center Building Six, the shortest tower at the #WTC complex. It suffered secondary but catastrophic damage when the North Tower collapsed.

In 2011, New York City Port Authority (@PANYNJ) gave the WTC artifact to CIA.
The column was originally unveiled on the fifteenth anniversary of 9/11, when it was temporarily displayed inside our Original Headquarters Building, before being relocated this year to its permanent location outside.
Read 8 tweets

@CIA
Sep 5, 2018
As college students go #backtoschool & begin to think about how their education will translate into a career, we’d like to share the experience of a young officer, “Lynn,” who never thought her unique education & skill-set would be a fit for CIA.

A Day in the Life of a Publications Officer

Lynn: “Publications Officer is our fancy name for an editor. My job is to make sure our intelligence products are reflective of CIA style & branding guidelines, properly classified & sourced, & easily readable for non-experts.”
Lynn: “I’m a mid-career hire. I spent several years teaching English in a public school before joining the Agency. I was lucky to know someone who worked in the Intelligence Community & pointed me toward this path because I didn’t even know that CIA had editors!”
Read 4 tweets

Myth: People who work for CIA are spies & agents.

Fact: US citizens who work for CIA are officers, not agents or spies. All employees, from operations to analysts, to librarians & public affairs, are considered CIA officers.
So, who is a CIA agent?

Our operations officers recruit well-placed human agents with access to secrets. These recruited spies are agents. Agents/spies are invaluable. They provide critical information about their country to help America.
Read 10 tweets

Vaughn Bishop never imagined that one day he would be asked to serve as Deputy Director of CIA. “Then again,” says Bishop, “at no point in my career did I ever cease to be amazed at the opportunities offered at CIA.”

Bishop is thrilled to work with his colleague & friend, Director Haspel, again. Years ago, when DCIA was a senior operations officer, & Bishop a senior analyst, they worked together on difficult missions from opposite sides of the Agency directorate structure.
DCIA Haspel & DDCIA Bishop believe close collaboration & communication across directorates is critical to fulfilling the CIA’s mission. As Bishop likes to say: managing between the white spaces on the org chart, the spaces between the directorates, is a powerful force multiplier.
Read 11 tweets

The CIA Speaker Series was established in 2014 to provide CIA officers with the opportunity to hear leadership insights from private industry and national security thought leaders.
During their visit to CIA, Coach Dungy & JB met with officers from CIA’s Talent Center to discuss opportunities & challenges related to diversity and inclusion, as well as how to dispel common misperceptions about CIA to potential candidates.
Read 5 tweets