Discover and read the best of Twitter Threads about #projectcassandra

This thread relates to recent #Q posts and gives a big-picture explanation of the massive #Treason that #POTUS and #WhiteHats have been fighting. This almost led to a military #Coup against #Traitor44's regime.

Graphic below acts as a map to clarify key elements.

2/
Many of the crucial components of the #Treason are contained w/in the "Shell Game" report compiled by #Patriot #ScottBennett. This was recently publicized on the internet, explained in this thread:

3/
Ever wonder why #DEM AND #GOP leadership opposed #Trump w/such animus? #Flynn and #Trump knew about the level of #Corruption/#Treason involving the elite, on BOTH sides of the aisle. Trump would discover, reveal, and punish their crimes (#DrainTheSwamp).
Read 17 tweets

They were w/#Watergate. Why not #FISAGate?

historyteacher.net/HistoryThrough…
1. To translate for those blocked from #TRUTH in the #LSM bubble, the above tweet references media silence on MASSIVE state-level #Corruption. Synopsis of key people involved in #DeepState #Treason is in this thread.

Benjamin Weingarten
@bhweingarten
There's arguably a far bigger Obama admin scandal relating to #IranDeal appeasement than shutting down the #ProjectCassandra investgiation into the #Hezbollah financing cars-for-cocaine, one involving upwards of $100bn flowing into the mullahs' coffers thefederalist.com/2018/01/15/wil…
As @FDD's @JSchanzer detailed in a must-read @TheAtlantic piece "The Biggest Sanctions-Evasion Scheme in Recent History" (theatlantic.com/international/…) #Turkey-#Iran concocted a "gas-for-gold" trade yielding $bns as part of an effort to wage "economic jihad" thefederalist.com/2018/01/15/wil…
The success of that effort, which surely funded detrimental activities to US while keeping the Khomeinists afloat during a time of econ duress was bad enough. Worse was that "NATO ally" #Erdogan AND THE OBAMA ADMIN whitewashed the scheme AND enabled it thefederalist.com/2018/01/15/wil… 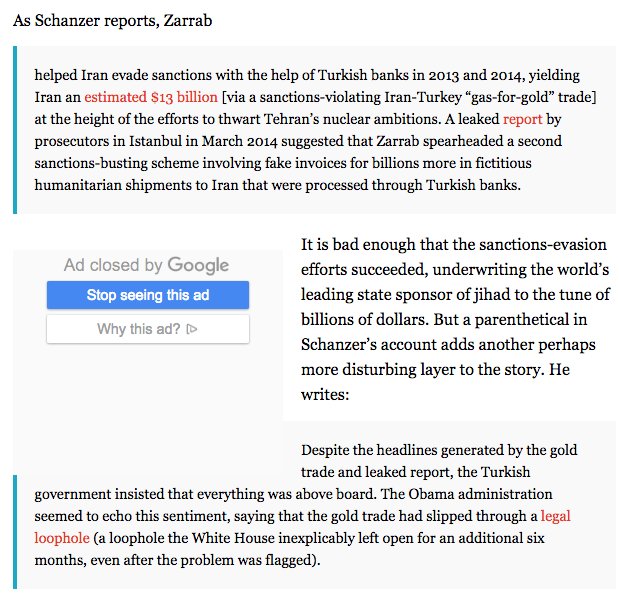 Stealth Jeff
@drawandstrike
It appears @ThomasWictor has had his account limited by Twitter for - get this! - quoting an antisemitic troll he was arguing with back in....2015.
: "My account is limited for 12 hours.

What happened is that I QUOTED a Jew-hater who used the word that rhymes with "pike" to describe Jews.

So as a result of quoting a Jew-hater, my account gets a strike."

So about 46 hours ago a Twitter engineer wrote a gay slur tweet for Thomas and posted it in his timeline, he gets his account limited for quoting a Jew-hating troll 2 years ago.

Raising your profile has consequences.

You become a target of smaller minds.
Read 11 tweets

Stealth Jeff
@drawandstrike
The Obama administration reversed all previous policy in dealing with the outlaw thug regime that runs Iran. Instead of isolating it & choking it off, they gave it billions of dollars & free reign to spread terror all over the region.
So I'm not interested in hearing one goddamn thing Obama, Rhodes, Kerry or Samantha Power have to say about the #IranProtests.

We just discovered about a week and a half ago the policy decisions by this group of so called elite geniuses included sabotaging #ProjectCassandra & giving Hezbollah free reign to traffic in drugs and weapons to keep the #MullahMafia happy & help get the Iran Deal done.
Read 28 tweets

Stealth Jeff
@drawandstrike
Reminder: @JoshMeyerDC pulled back the curtain not just on Obama's sabotaging of #ProjectCassandra with is investigative report; he also helped clarify exactly what this Iranian regime really is: a gang of criminal thugs.
Not only has the Iranian regime been exporting terrorism by shipping weapons & manpower to various proxy wars around the region; it's also been funding & supporting itself through a very lucrative world wide trade in illegal narcotics such as cocaine.
Before Obama, this criminal regime was being held in check. Obama spent 8 years implementing a radical policy in which an Iranian backed nuclear hegemony over the Middle East was forgone conclusion; it could only be 'managed' or delayed, not stopped.
Read 34 tweets

Literally the next day after Sessions ordered the public reopening of the #UraniumOne investigation, we get this:

foxnews.com/politics/2017/…
Within 2 weeks of Strzok, Lisa Page, Bruce & Nellie Ohr & McCabe getting dragged into the daylight, leading to the exposure of a DOJ/FBI plot to use a fake dossier to manufacture a scandal around an incoming Presidential administration....
....we also get the BEGINNING of the reopening of ALL the compromised/sabotaged FBI investigations/programs under Obama/Holder/Comey.

Scott Anthony⚖️🇺🇸JUSTICE🇺🇸
@ScottAnthonyUSA
This is a pretty significant slam against Obama... considering the source is @politico ... I'm providing the source link so that others can read the full report as written (No, Im not a fan of politico, but in fairness, posting it)
politico.com/interactives/2…

Obama officials defend their complicit actions of not pursuing Hezbollah aggressively by offering up 8 arrests of evidence that they did?

THAT is funny right there! Weren't there 19 people arrested in the #BundyRanch incident? Thats more than 2x the # of Hezbollah

OF COURSE!!!!! Obama Administration falls back on "... but but but... we can't just arrest major drug-smugglers / sex-traffickers / terrorists... what if MOSSAD had an inside lead?"