Discover and read the best of Twitter Threads about #Indictment

Richard Bejtlich
@taosecurity
I imagine the #sonytruthers playing armchair #DFIR investigators will emerge from wherever they’ve been hiding in order to dispute the #DPRK #indictment. My advice: you were wrong in 2014-2015, and you’d still be wrong today. HT ⁦@JohnHultquist⁩ int.nyt.com/data/documenth…
Because #attribution is inherently political per @RidT and @BuchananBen, you need more than “hacking” knowledge to assess national policy. Experience w/ #cybersecurity clearly helps, but gov internals, intel agency processes, bureaucracy, trade, diplomacy, LE, are all important.
I think it’s slowly changing, but a failure of #cybersecurity has been to think “soft” areas are much easier than coding, so any leet hacker is inherently qualified to address political science, history, economics, and related topics by virtue of their ability to code in ASM.
Read 4 tweets

#CorruptGOP
amp.cnn.com/cnn/2018/08/21…
Hunter & his wife charged **hundreds of thousands of dollars** in unusual charges on his campaign credit card👉🏼Italian vacation, dental work, purchases at a surf shop & huge tabs at bars in restaurants in San Diego & DC...plus **airfare for a pet rabbit** to fly w/the family.🤣
Hunter's Democratic challenger @ACampaNajjar is a fmr Dep't of Labor aide in the Obama administration & has repeatedly outraised Hunter.

Only Hunter & Campa-Najjar will appear on the ballot (no write-ins!), so please support Ammar Campa-Najjar's campaign‼️🇺🇸

Cohen was also under investigation for bank and tax fraud from his shady taxi business dealings.😎

Now, Broidy is being probed for his shady dealings w/China & former Malaysian officials.🤨2/

Broidy is being investigated for allegedly developing a plan to try to persuade the Trump government to extradite a Chinese dissident back to #China, a move sought by the Chinese president.🤨

The same guy Trump chillaxed with at Mar-a-Lago.🙄 3/

Collins was the 1st sitting member of Congress to endorse Trump's presidential bid.🙄

Collins was a board member of biotech firm Innate Immunotherapeutics & allegedly gave his son insider info that was used to make timely stock trades.🤬

google.com/amp/s/www.cnbc…
Disgraced former HHS Secretary Tom Price also invested in Innate Therapeutics, based on a tip he allegedly received from Collins, who sat on the company’s board.🙄

lex
@lex6m
Wow, this unsealed #indictment. Looks like Schulte was the C1A leaker of Vault 7/8 to WL ("organization-1"). Varied speculations floating around about him, note JA has been offline since this time. Definitely one to watch and see what develops.
justice.gov/usao-sdny/pr/j…

#TrumpRussia
amp.cnn.com/cnn/2018/07/26…
Cohen did NOT tape the meeting, but “has expressed hope that this claim about the Trump Tower meeting will help him reach out to Mueller and possibly lessen his legal troubles.”

And #SHOCKER, as we’ve known all along, there was NO WAY that Don Jr handled this meeting without Daddy Trump knowing EVERY detail.🙄 3/

OK, that's not really "breaking news," but the fact that the EDVA judge just granted #immunity to FIVE witnesses in exchange for their testimony is REALLY bad news for Paulie Walnuts, whose (first) trial starts July 25.😎

As for the identity of these **FIVE witnesses** who got #immunity deals (meaning: they likely had legal culpability, but avoid being prosecuted), here are my best guesses:

My best guess for Witnessl #5 is former Obama WH counsel, Gregory Craig, who wrote the Tymoshenko report that Vin Weber & Tony Podesta used to lobby US lawmakers to justify the unjust IMPRISONMENT of anti-#Russia🇷🇺Tymoshenko by the Ukraine govt.🤔

In Dec’16, MacFarland wrote that #Russia🇷🇺had “just thrown the USA election to him (@realDonaldTrump)”‼️

*Mere hours* after Obama imposed #sanctions, McFarland wrote that Misha Flynn would be speaking to then #Russian🇷🇺ambassador Kislyak.🙄

Mueller asked the EDVA judge to give **#immunity to 5 potential witnesses** who will testify at Manafort’s bank-#fraud trial starting July 25, but ONLY if they get immunity‼️ 1/

google.com/amp/s/www.bloo…
Mueller didn’t identify the FIVE witnesses who ROLLED on Manafort👉🏼have NOT been charged and would plead the Fifth & remain silent unless granted #immunity (they got a VERY good deal). Their names will be made public only if they are called to testify.🤔 2/

#MuellerTime
These 5 witnesses who got a deal have ties to the BANK-FRAUD and other charges against Manafort. So who are they⁉️

It's NOT Rick Gates (he was CHARGED & pleaded GUILTY). These five witnesses have NOT been charged.🤔 3/

ℓʋℓʋ ℓɛ Trump Abuses Children
@LuluLemew
#Hindsight2016 Thread
On or about JUL 6, 2016, WL:
▪If you have anything Hillary related, we want it in the next two days, bc DNC is approaching & she'll solidify Bernie supporters.
▪Conflict between Bernie & Hillary is interesting.
#indictment
#BernieHillaryConflict

Dr. Dena Grayson
@DrDenaGrayson
🤣LOL...before Trump will agree to an interview, Guiliani says Mueller must prove he has evidence that:

✅Trump committed a crime
✅His testimony is essential to the probe

👆🏼These are required for a GJ #subpoena of a *target*. Mueller has BOTH.😎

nyti.ms/2lXN0ML
TRUTH: @realDonaldTrump is *refusing* a voluntary interview and is requiring a similar burden of proof that Mueller would need to get a #subpoena, assuming Trump is a *target* of the grand jury probe — a very safe bet.😉 2/

Trump is increasingly becoming cornered, whereas Mueller has many options, including subpoenaing Trump. Mueller also could unload other #indictments against Trump associates and/or family.😎

here is the unsealed indictment for Supreme Court Justice #AllenLoughry

Manafort and Kilimnik also charged with:

#Rosatom, one of the largest companies of the Russian Federation- the largest (nuclear) electricity generating company in Russia. They produce approximately 3,000 tons of uranium per year. I think you know where this is going... #qanon
#TENEX is the commercial sales arm for Russia’s #Rosatom, they are the sole supplier and exporter of Russia's uranium and uranium enrichment services. TENEX took full control of #Uranium1 in 2013. #U1? Yeah, this is definitely where #qanon is pointing us...
Read 10 tweets

THREAD: Trump officially is in the barrel‼️

Mueller informed Trump’s attorneys last month that **TRUMP IS UNDER INVESTIGATION**, but is not considered as a criminal target “at this point” = yet.🤔

washingtonpost.com/politics/muell…
In negotiations in early March about an interview, Mueller described Trump as a SUBJECT of the #TrumpRussia🇷🇺investigation.🤗

SUBJECT👉🏼that person has engaged in conduct that is **under investigation** but there is not sufficient evidence to bring charges.🤔 2/

Mueller is working his way up from the bottom-dwelling scum suckers, all the way to the top.😎

In this thread, we will focus on what v.d.Swamp said about his case, specifically what info he tried to COVER UP.🤨

Of course, van der Zwaan’s attorneys try to spin a sob story about how v.d.Swamp’s “world has collapsed” and “his career has been destroyed.”🙄

Well, yeah. That’s what happens when you LIE to the Feds and DESTROY EVIDENCE‼️3/

Following his #indictment of #Russians🇷🇺for social media trolling and illegal-ad-buying, #Mueller is assembling a CRIMINAL CHARGES against Russians who HACKED and LEAKED private info designed to hurt Democrats in the election‼️ 1/

#FVEY
#TrumpRussia
Potential charges include violations of statutes on #conspiracy, election law, and the Computer Fraud and Abuse Act (CFAA). One source said the charges are not imminent, but other knowledgeable sources said they are expected in the next few weeks or months.🤗 3/

theguardian.com/us-news/2018/f…
According to Mueller, the Europeans known as the “Hapsburg Group” included a “former European chancellor”👉🏼covertly paid by Paul Manafort.🤨

WHO ARE THESE PEOPLE⁉️ 2/
“Chancellor” is the head of government in Germany & Austria.🤔

This is the THIRD indictment against Manafort‼️ 1/

Here is a link to Manafort's THIRD #indictment‼️ 2/

1. #Conspiracy against the US
2. Conspiracy to LAUNDER MONEY
3. Unregistered agent of a foreign principal
4. False & misleading #FARA statements
5. FALSE statements 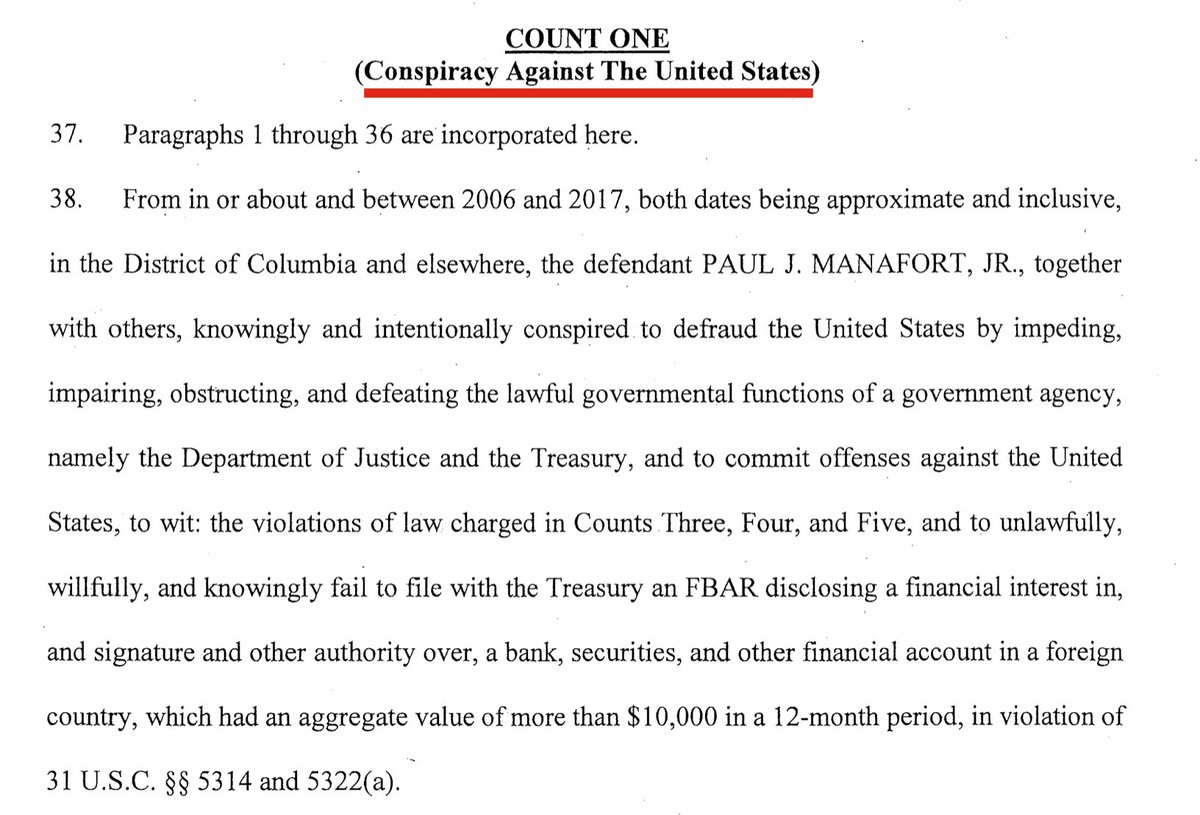 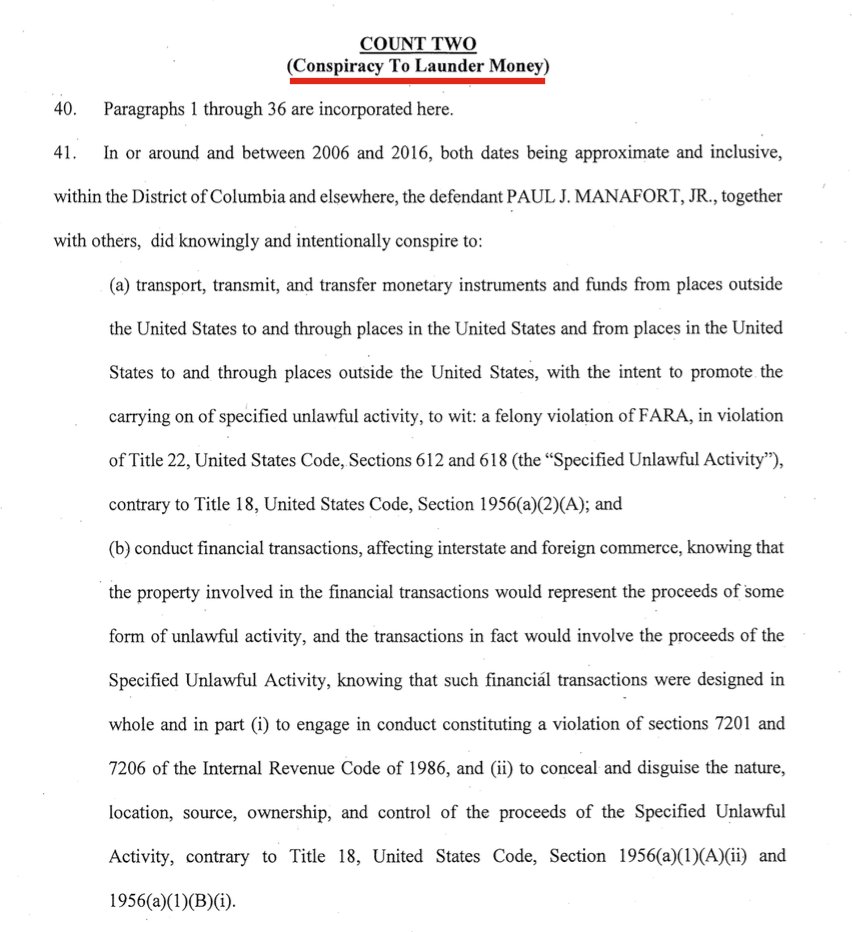 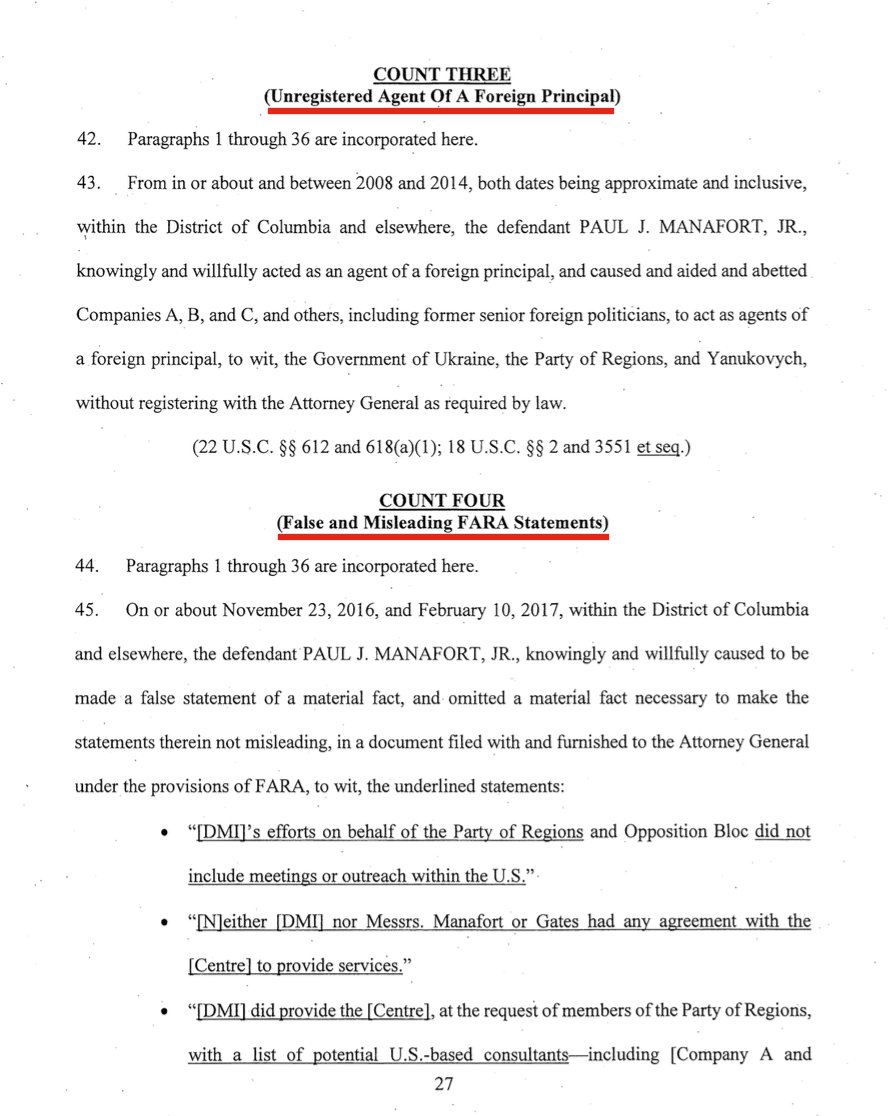 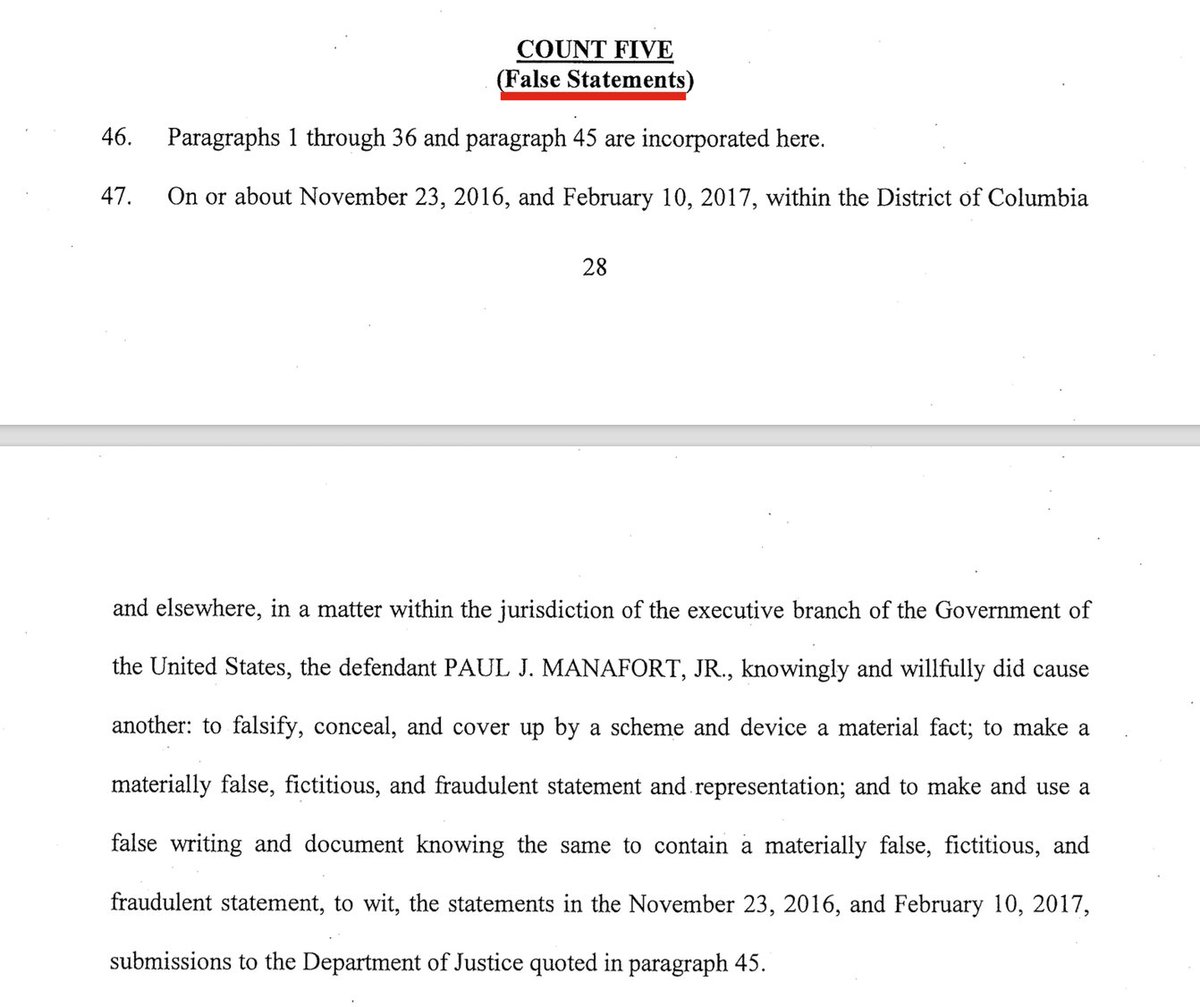 cnn.com/2018/02/16/pol…
🔥All were charged with conspiracy to defraud the United States, three were charged with #conspiracy to commit wire fraud and bank fraud, and five defendants with aggravated identity theft. 2/
The #indictment focuses on the #Russian🇷🇺troll farm — Internet Research Agency — which to interfere w/the US political system *in 2014*.🤨 3/
Read 7 tweets

nbcnews.com/news/us-news/m…
THREE sources👉🏼Mueller🇺🇸focusing on Flynn’s🇷🇺lobbying, including whether he laundered money or lied to Feds about his overseas contacts.🤔 2/
Mueller's🇺🇸team probing if Flynn🇷🇺planned kidnapping of Fethullah Gulen, rival of Turkish President Erdogan, from US to Turkey.😳 3/
Read 17 tweets