Discover and read the best of Twitter Threads about #rememberinnovember

Hassan Ahmad 🇺🇸
@HMAesq
It's Saturday, but there's no day off of this administration's oppression of aspiring Americans... especially the poor.

Most immigrants have always had to prove they're not a public charge: it's been the law for over 100 years.

But the administration now wants to greatly expand what a public charge is...meaning the types of public funds an aspiring American can lawfully use.

And also be able to deny green cards based on an officer's belief of an immigrant's likelihood at becoming a public charge.
I gave this example in a piece I wrote for @qz:

1. Here is a blast from the past) from a 2016 Mychal Massie opinion piece: (h/t @amvn90210 )
2. “[Trump] is someone who understands that it takes more than hollow promises and political correctness to make America great again. Listening to Hillary Clinton and Bernie Sanders talk about fixing America is like listening to two lunatics trying to ‘out crazy’ one another.”
3. Think about how prescient that statement was in the context of today’s OUTSTANDING report on GDP growth! 4.1% (and probably understated at that)!
Read 7 tweets

Another result of this blatant voter suppression is putting to bed the fiction of a moderate governor. This is unabashedly Paul LePage territory. #NHPolitics
Former #NHGov and @SenatorShaheen: “Today, the Governor sent an unmistakable message to young people in New Hampshire that, rather than listening and responding to their concerns, they should be hindered from democratic participation.” #NHPolitics

Add...
Day 631 since Donald Trump admitted to sexual assault — yet he’s still in the Oval Office

Add...
Day 483 of NO EVIDENCE produced by Trump that his phones were tapped by Obama. #fakenews #TrumpLies

Stu Cvrk
@STUinSD
(1 of 5) Excellent and intellectually challenging article here on why socialism will always fail, including on the latest “social justice” pursuit. Excerpts follow:
(2 of 5) “To strive, for example, to build an ideal society in which ‘equality of results’ or “outcomes” -- what is called ‘social justice’ -- is guaranteed can only produce a levelled-down caricature of human struggle and accomplishment.”
(3 of 5) “We have seen it happen time and again, and the consequences are never pretty.”
Read 5 tweets

1. Let’s start with this article from the @NYT (at least most of their straight news is still readable): nytimes.com/2017/09/13/mag…
2. This article might be introduced inside the D.C. Beltway by traditional “Well, first of all -------.” Or by Millennials with trite, “So! Xxxxxx.” But instead it reveals the beginning of Global Communism, Chinese-style.
3. Placing a huge debt upon a nation struggling to recoup after a long and devastating civil war is a typical Communist Chinese blow of the first order. And a foot placed firmly in the door for control of the Indian Ocean.
Read 19 tweets

Stu Cvrk
@STUinSD
Thread: It’s a Republic, But Can We Keep It?

1. Founding Father Ben Franklin was asked at the close of the Constitutional Convention in 1787, “Well, Doctor, what have we got—a Republic or a Monarchy?”
2. To which he replied, “A Republic, if you can keep it.” He well knew that the Constitution was expressly written to bind the hands of those in government in order to keep the potential for tyranny out the hands of a few and carefully controlled by an informed citizenry.
3. He and the other Founders also well understood Lord Acton’s famous remark, “Power tends to corrupt, and absolute power corrupts absolutely.” They witnessed the consequences directly in English King George III’s tyranny.
Read 34 tweets

George Lakoff
@GeorgeLakoff
THREAD: Like some foreign dictator, the Republican in the White House will attack the free press today. Here are a few action strategies to flip his negative attacks into positive persistence.
1. Show your support for courageous journalists who #ProtectTheTruth 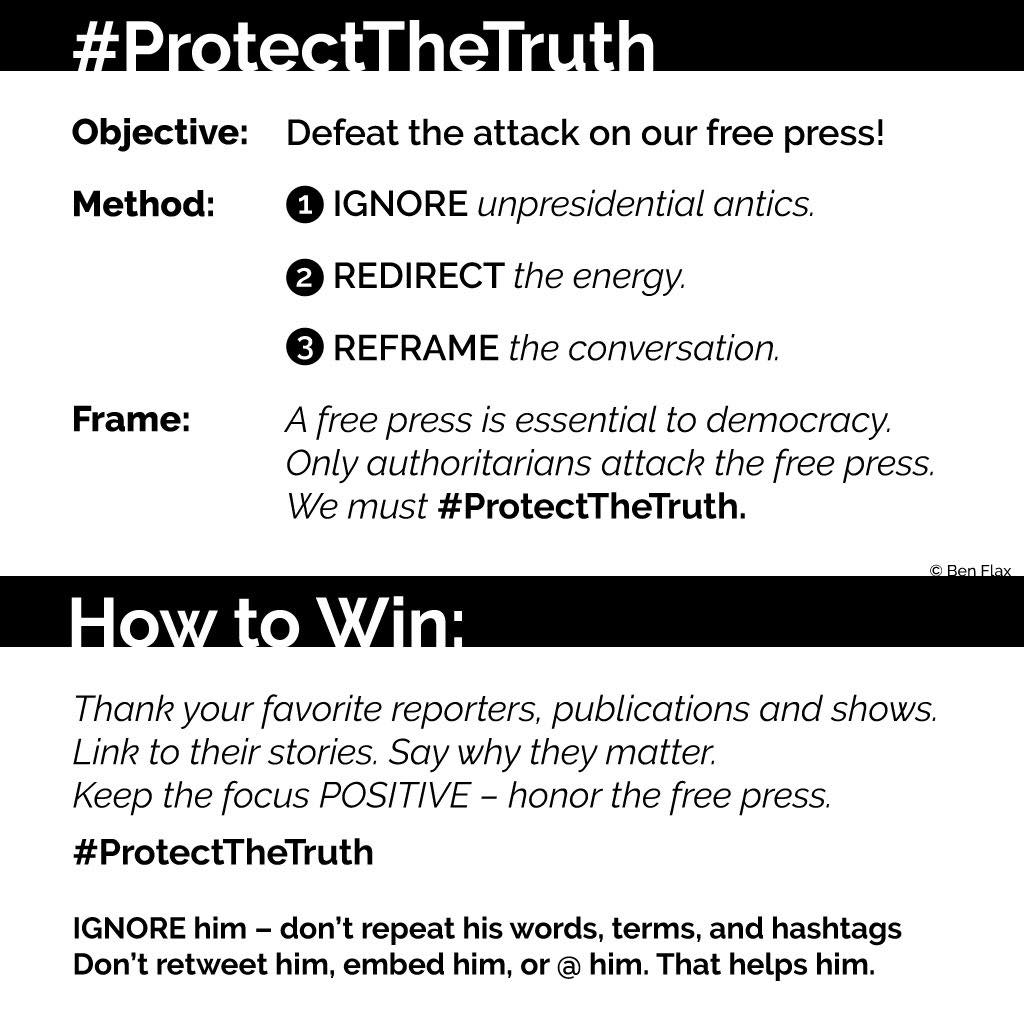 2. BECOME A SUBSCRIBER. Whether it’s your local paper or a national publication, subscribe. Show that you value truthful journalism and will pay for it. Support public radio or independent reader-supported operations like @MotherJones motherjones.com/about/support/
3. FUND VICTORY. If we all gave 50 cents to candidates like @IronStache, @KatieHill4CA , and @JanzforCongress every time Trump tweeted, we’d have more than a #BlueWave2018. We’d have a #BlueTsunami2018! Fund victory! Pick a candidate in a tough race and pledge 50 cents per tweet!
Read 7 tweets