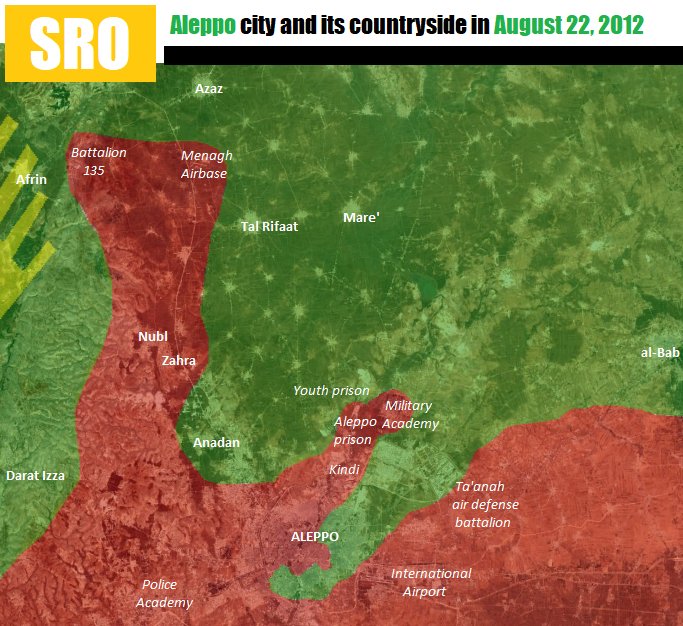 CHRONOLOGY :
- Azaz is secured by rebellion in July 19, 2012
- Silent cells taking over Salah ad-Din in #Aleppo city in July 20, 2012
- Anadan secured in July 29, 2012
- Al-Bab and Tadef secured in July 29, 2012
- Most of E-#Aleppo under rebellion in August 6, 2012
CHRONOLOGY AROUND #ALEPPO :
- Taanah battalion under rebels in September 2012.
- Military academy is taken by Liwa al-Tawhid in December 2012.
- Battalion 135 is falling in January 2013.
- Police academy is falling in March 2013.
- Kindi and Prison besieged since April 29, 2013.
ADD. : in this time, #Afrin #YPG were'nt really "#YPG" but #PYD volunteers defending their town. They collaborated with rebels, including Liwa al-Fateh, to take over Battalion 135 that was shelling Afrin and Azaz as defending Minagh airbase.
#SRO | ARCHIVES - Here, in the day of Liwa al-Tawhid formation, you can see two of the main leaders of the brigade (Saleh to die in November, 2013). On the right, a smll leader to become more powerful : Sheikh Tawfiq Shahabudeen (still alive, leader of Nur ad-Din Zini). 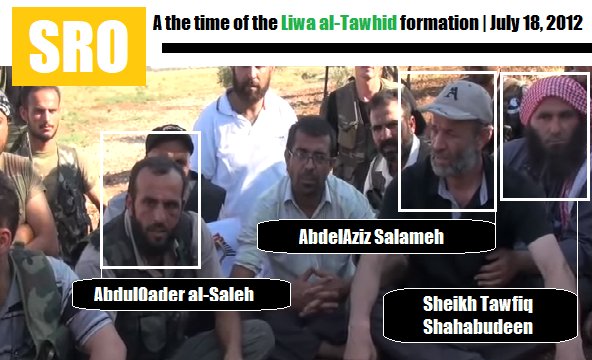 @Syria_Rebel_Obs
Oct 7, 2018
#SRO | URGENT - Abu Murshid al-Bardan, former commander inside #Daraa #FSA S-F Jaysh al-Thawra, has won many things from #Russia, with #Syria'n regime very angry against Russia. Fifth Division to be led only by #FSA leaders with the troops they want to recruit (1).
#SRO | URGENT - This Fifth Corp / Division to be only answering to #Russia (contrary to the first attempt, recently dissolved, that was linked to #Syria'n regime forces). Yes, here we are : a large "#FSA" army, under #Russia protection and command, is now formed in S-#Syria (2).
#SRO | URGENT - Imagine the face of regime officials, officiers and supporters... #Russia giving amounts of money, power and support for a "terrorist al-Qaeda group" (not anymore ?) as Jaysh al-Thawra to become de facto an autonomous army (Fifth Corp) in S-#Syria (3).
Read 5 tweets

@Syria_Rebel_Obs
Feb 9, 2018
#SRO | HISTORY | DID YOU KNOW ? - #Assad loyalists resisted for months in a small medieval citadel and few houses in #Harem in 2012 ? Depiste four assaults betwn July 15 and December 25, 2012 (last and successful #FSA assault), one hundred loyalists resisted without any hope (1).
#SRO | HISTORY | DID YOU KNOW ? - When #FSA entered Harem town, near #Turkey | #Syria border, the local security branch and an army battalion refused to defect and decided to resist. In August 2012, the road to Harem was cut : the loyalist there were completely isolated (2).
#SRO | HISTORY | DID YOU KNOW ? - It took four assaults (biggest took place in October and December 25, 2012) for #FSA to take over Tarmiya area and the #Harem citadel. Dozens of loyalists were captured and delivered to regime in exchange of prisoners weeks after. (END).
Read 4 tweets