Discover and read the best of Twitter Threads about #TrumpShutDown

Ben Wikler
@benwikler
In the forthcoming book "An Uncivil War," by @ThePlumLineGS (out 10/16! Pre-order: goo.gl/oq9ZTj), I point out that elected Ds & Rs respond to very different media incentives. Ds hate criticism by mainstream media. For Rs, only Fox/Limbaugh matter. 1/

This plays out in a million ways. I tell the story of the DACA #TrumpShutdown in the book. But as @ThePlumLineGS notes, it particularly matters vis-a-vis "Constitutional hardball"—the extent to which each side is willing to flout norms in pursuit of substantive & political ends.
This dynamic is at play to a staggering extent in the Kavanaugh confirmation fight. Imagine of one of Obama's lawyers & top aides was nominated for SCOTUS, and a Dem prez refused to release >90% of White House papers. Media would scream. And Dems would buckle, & release it all.
Read 8 tweets

Joy Reid
@JoyAnnReid
The Senate has 51 Republicans. To get a veto-proof bill, they would need to get at least 15 Democrats, but probably more like 19 or 20 to account for the tea party right wingers in the R caucus who would probably vote no at all costs and the cowardly flip-floppers who might bail.
That means they need a bill that gets more than the Joe Manchins and Heidi Heitkamps. They have to eat into the caucus that includes potential 2020 candidates. That would need to be a pretty generous bill.
What activists will do if they are smart is immediately move forward from the #TrumpShutdown. Let Republicans go on cable TV and pretend this worked out well for them, which is absurd. FOCUS ON WHAT WILL BE IN THAT BILL. Make Democrats cut a smart, good deal.
Read 8 tweets

Lisa Sharon Harper
@lisasharper
1. FACT CHECK: Dreamers DID NOT break the law. They were brought here BY THEIR PARENTS as children. They are not responsible and should not be penalized for someone else’s wrong. #basicethics #nosoullesspolitics #TruthMatters #DreamActNow

Not only did Republican Senators also vote against the CR last night that led to the shutdown, but...

REPUBLICANS CONTROL ALL THREE BRANCHES OF GOVERNMENT.
#TRUMPSHUTDOWN — GOP MYTH #2: Republicans don't really control Senate b/c of the Filibuster, so Dems are to blame.

REPUBLICANS CONTROL WHAT BILLS GO TO FLOOR FOR A VOTE.

Democrats have made offer-after-offer to keep the Gov open. Even after Schumer attempted to cut a deal w/ Trump, within two hours...

Rich Wilkins
@TheRichWilkins
Let’s talk about America, the #TrumpShutdown, Donald Trump, the @womensmarch, and @TheDemocrats on 1/20/18, one year into Trump’s American carnage.
1. First off- the positive point for America at one year- we are still here. We’re still alive. We’re not yet at collapse. The economic progress of @BarackObama’s administration has continued so far.
2. But things are rough under the surface. The judiciary is packed with unqualified conservative hacks. We’re destroying our standing in the world. Medicare and Medicaid are under attack. Our tax code is being used to give away our treasury.
Read 23 tweets

GothamGirlBlue
@GothamGirlBlue
There would be nothing to negotiate over if the GOP had just taken care of DACA and CHIP themselves, as the repeatedly say they want to do.
Trying to blame the #TrumpShutdown on the Democrats is taking the process of running the government and isolating it to a single vote.
But these are items that have been around for months. They procrastinated and now they’re blaming it on their roommate for not letting them stay up all night cramming.
Read 7 tweets

Indivisible Guide
@IndivisibleTeam
All votes are in, and the Senate Continuing Resolution cloture vote has failed. This means that the government is not funded and the #TrumpShutdown is officially in effect. 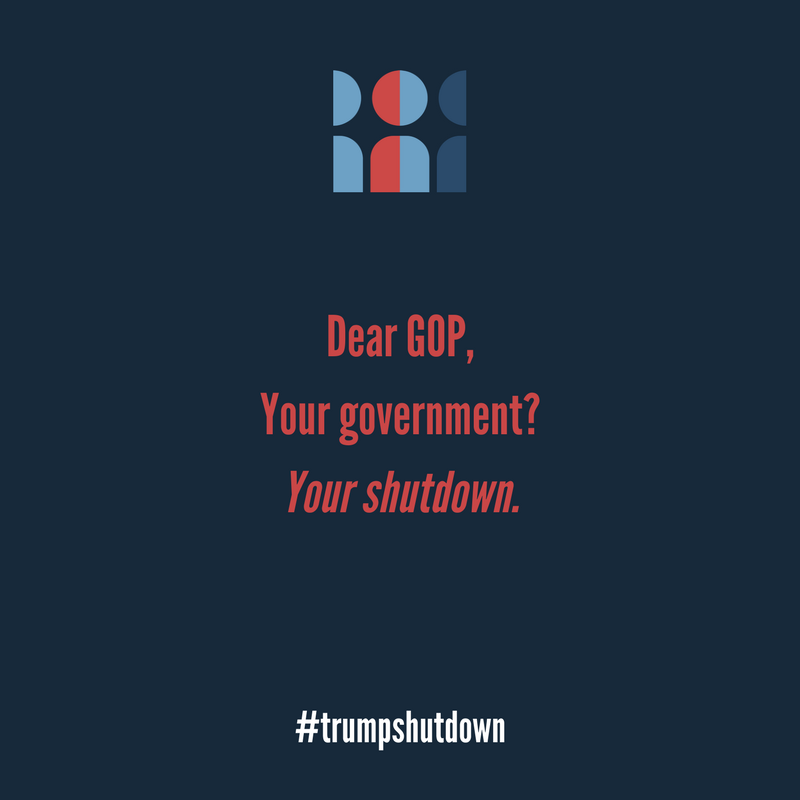 Republicans let CHIP expire to pass the #GOPTaxScam. Trump ended DACA. The GOP caused the #TrumpShutdown and refused to put a bill that could pass to a vote. They can only fix it by cleaning up their mess— which has already upended millions of lives.
This isn’t easy, but it is NOT. OVER. Nearly 9 million children, over 800,000 Dreamers, and all of their loved ones are counting on YOU to fight back. #DreamActNow #FundCHIP
Read 9 tweets

Propane Jane™
@docrocktex26
OMB tells federal agencies to prepare for shutdown washingtonpost.com/news/powerpost… #TrumpShutdown #GOPTaxScam #ShitholeGOP
The #GOPShutdown on the heels of the #GOPTaxScam reminds me of drug addicts who blow their entire check on a binge on the 1st of the month, then don’t have any money left to pay their rent or bills.
That awkward moment when you got elected on promises to shut the Black POTUS’ government down and drown it in a bathtub, but now that it’s finally your turn to govern, you can’t because you’re drowning. #TrumpShutdown
Read 29 tweets

Propane Jane™
@docrocktex26
Coal miners turn on Trump after they gain fewer jobs than a local Sam’s Club shareblue.com/coal-miners-tu… via @shareblue #MAGAFail
Steelworkers turn on Trump: “We’re worse off now than we were” before the election shareblue.com/steelworkers-t… via @shareblue
OMB tells federal agencies to prepare for shutdown washingtonpost.com/news/powerpost… #TrumpShutdown #GOPTaxScam #ShitholeGOP
Read 28 tweets