Discover and read the best of Twitter Threads about #acasabotage

Charles Gaba
@charles_gaba
THREAD FOR EVERYONE OVER 40 YEARS OLD:

Do you remember “Harry & Louise”?

Here’s a reminder. Watch both commercials, but especially the second one. There’s a LOT going on here:

Charles Gaba
@charles_gaba
🚨🚨🚨
GRAPHICS-HEAVY THREAD WARNING!
How Much More Will #ACASabotage Cost Unsubsidized Enrollees in YOUR Congressional District???
1/ Last year, I posted state-by-state infographics which broke out the estimated number of Americans who would lose healthcare coverage if each of the various #ACA repeal bills form the GOP were to become law.
2/ At first I used my own estimates, but then @EmilyG_DC and her colleagues from the Center for American Progress (@amprog) stepped up and started compiling their own projections. Their methodology was different but our estimates were generally in the same range.
Read 67 tweets

For those confused (since AL carriers are actually *dropping* rates 2%), here’s why: They both clarify that rates would drop significantly *more* without #MandateRepeal & #ShortAssPlans. Note: I’m actually assuming 1/3 *less* of an impact than the @UrbanInstitute did in March.

Charles Gaba
@charles_gaba
⚠️⚠️ THREAD: Trump/GOP #ACASabotage is costing #ACA enrollees even more than you thought. Here’s why (warning: graphs ahead!)
1/ Every year during the off season, I spend countless hours digging into hundreds of wonky insurance carrier rate filing forms to analyze the weighted average rate increases for the following year.
2/ I then compile a table which breaks these averages out on a state-by-state basis, and I have a pretty damned good track record of accuracy, if I say so myself.
Read 35 tweets

Charles Gaba
@charles_gaba
I *half* agree with this. 2019 #ACASabotage-created rate increases will have *some* political impact, but not nearly as much as many thought. Here’s why:

Ironically, the very ANTI-#ACASabotage measures being taken by some states reduce political impact. GOP kills mandate, causing rates to spike 10 points. State scrambles, reinstates mandate, spike cancelled out for that state. Doesn’t change what GOP did to other 4 dozen states.
And in other states it’s even harder to make the point: Minnesota’s reinsurance program means rates will DROP 8% next year, which is good…but if the GOP hadn’t repealed the mandate, they would’ve dropped by around *15%* or so. That’s much more difficult to “prove” to voters.
Read 3 tweets

PUT ANOTHER WAY, so far, unsubsidized #ACA enrollees will be paying around $790 more *per enrollee* next year on avg. than they otherwise would be without #ACASabotage.
EXAMPLE: In New York, rates WOULD have gone up 12.1%, but due specifically to the GOP repealing the #ACA individual mandate & Trump killing restrictions on junk plans, they’re expected to increase ~24%.
Read 8 tweets

Charles Gaba
@charles_gaba
1/ DEAR DEMOCRATS: Based on 21 states so far, I’ve concluded that you’re *sort of* overplaying your hand re. 2019 #ACA premium hikes. Let me explain. acasignups.net/18/07/03/updat…
2/ The talking point being spread among Dems is that “#ACA premiums will spike by double digits due to #ACASabotage!” The image which comes to mind is of rates increasing by ~20-25% with sabotage vs. perhaps ~5-10% without it, costing unsubsidized enrollees up to $1,000 more.
3/ Now the first part *is* accurate: #ACASabotage *is* causing premiums to increase an extra ~12% or so. However, the *specifics* are shaping up to be a bit different than I expected:

Charles Gaba
@charles_gaba
THREAD: For anyone who doesn’t believe the latest batch of #ACASabotage by Trump isn’t gonna jack rates up next year, I’ve already got receipts out of Virginia.
1/ As I noted earlier today, Virginia insurance carriers have already submitted their *preliminary* 2019 premium rate filings. While these may be revised/change over the summer/fall, the initial statewide average is around 15.1%. acasignups.net/18/05/06/and-w…

2/ The averages range from a 5% *drop* (Optima Health) to as high as a 64% *increase* (GHMSI). That much is pretty clear. What’s less clear is *how much* of these increases is due specifically to #ACASabotage, as opposed to normal inflation/etc. HOWEVER…
Read 18 tweets

Peter Morley
@morethanmySLE
On the 8th Anniversary of #ACA it's crucial to demonstrate how our President has undermined healthcare for MILLIONS via #ACASabotage since his inauguration.

Repeal legislation begins. #ACASabotage 2/30
1/26/17: Administration stops planned ads for the final week of open enrollment for marketplace health coverage. As a result, 400K+ are not enrolled.

ACA ConsumerAdvocacy
@ACAConsumer
Thread: So, about those blue images. We partnered with @2018ACASignup to try to help offset #ACASabotage around enrollment. Kinda impressed with how the whole thing worked. Here are some numbers:

6 national campaigns
29 state campaigns
21,853,777 reached on social media /1
Based on estimates of sharing, 5-10x as many people saw the images and messages via retweets and shares, bringing the potential audience on social media to somewehere between 100 million and 200 million pairs of eyeballs had a chance to see our messages. /2
That is not counting the flyers, both national and state-specific in English and Spanish that were posted by enterprising activists across the country, left in libraries, clinics, offices, grocery stores and more. Or the card tables set up at meetings and fairs. /3
Read 5 tweets

Charles GetCoveredBa
@charles_gaba
THREAD: OK, here’s how (and how many) people will be impacted by the #CSR #ACASabotage 1/n: acasignups.net/17/10/19/updat…
2/ First of all: If your income is under 400% FPL (~$48K for a single adult, ~$98K for a family of 4), you likely won’t be impacted at all.
3/ Your FULL PRICE rates will increase, if you buy through the #ACA exchange, your tax credits should rise to roughly match the increase…
Read 33 tweets

Charles Ghoooulba 🎃
@charles_gaba
1/ THREAD: Trump’s signing his EO tomorrow. Here’s how it can destroy the Individual Market: acasignups.net/17/10/10/how-t… #ACASabotage
2/ Here’s the breakout of how healthcare spending is concentrated nationally, according to @KaiserFamFound : 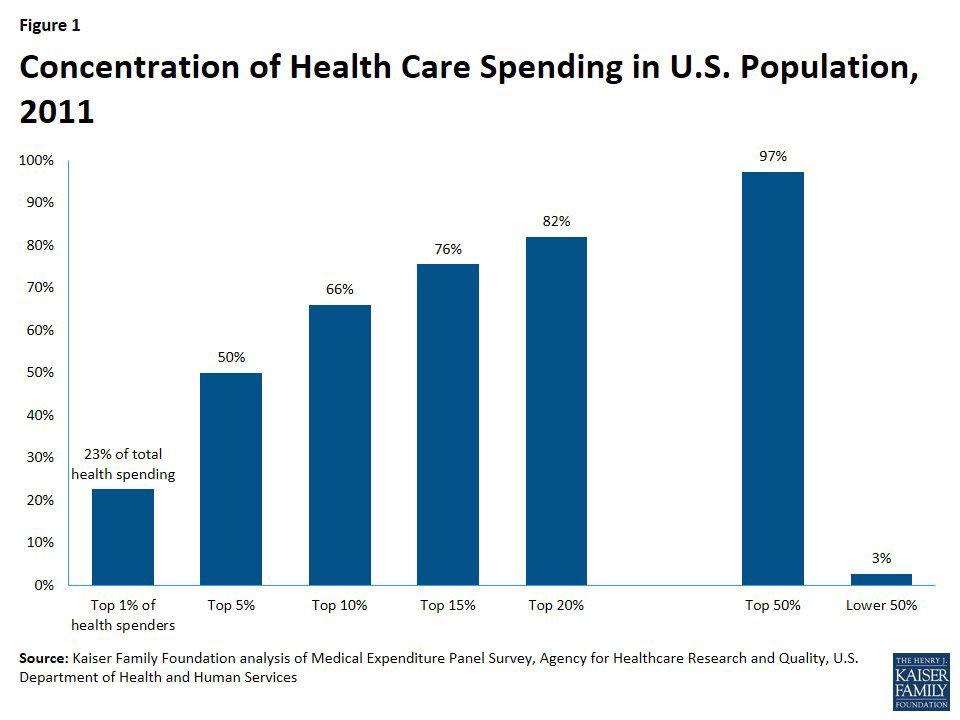 3/ As you can see, 1% of the population accounts for 23% of all healthcare spending. Think cancer patients undergoing chemo, etc.
Read 55 tweets