Discover and read the best of Twitter Threads about #ImmigrationReform

Ryan Hilmoe
@Rhilmoe89
Many people think that “illegal immigrants” are the scourge of this country, and are a very hot topic in the political world. Let’s dispel any myths and misunderstandings on this subject once and for all.
#Immigration #ImmigrationReform
Read, RT, LEARN! 😁🧠

The first item I’d like to point out, is that a better term we should use would be undocumented immigrant. “Illegal alien” creates and perpetuates the stigma that these people are inherently bad, or criminal. The reality is that they are just seeking a better life.
Probably the biggest misunderstanding is that everyone should simply just immigrate legally, when in reality there’s nothing simple about it. There are very specific and restrictive criteria one must meet in order to immigrate to the U.S. legally.
Read 27 tweets

Doug
@tweetsofdoug
Why do I have locks on my doors?

Because I don’t want people I don’t know to enter my house uninvited, invade my personal space, and threaten my family.

I guess you got me, xenophobes. Build the wall, or whatever.

But first, a thread...
I live in a small house.

So, let’s make this argument a bit more analogous.
Suppose I live in an enormous house, say for example one that’s 3.797 million square miles.

And let’s supppse that I share this house with 300 million or so other people. And, collectively, we are trying to determine whether or not we should lock our door.
Read 9 tweets

#SCOTUS delivered a monumentally intelligent and juridically logical decision but that would’ve been completely different had the wrong justices been appointed. There is no such thing as absolute truth. Our brave republic could go topsy-turvy in the flash of an instance.
What used to be mainstream media is now dead. What
were conventional political parties are on life-support. Everything is changing and the #DS and #ShadowGovernment are panicking. Behold the power of civilian and citizen journalism and enjoy your front row seat to #revolution.
Read 3 tweets

Katie Anthony
@yokatykatikate
The GOP ties #FamilySeparation to #ImmigrationReform b/c the families they're terrorizing are immigrants. But those are TWO SEPARATE ISSUES. That's like tying #UnlawfulPoliceShootingsofBlackPeople to the #OpioidEpidemic because you know people feel icky about addicts. 1/
The GOP is using public distaste and bias against immigrants to force our acceptance of state violence. What if your postal carrier pepper sprayed you if you parked more than 18" from the curb? I hate bad parkers. We all do. The campaign could catch on. #ParkingSpaceFaceMace 2/
They say, "We can either keep families together at the border or fix immigration." By marrying these two DIFFERENT issues under single category of "Immigrant problems," the GOP forces a conversation in which cruel family separation is treated as a reasonable option. IT'S NOT. 3/
Read 13 tweets

Bryan Dean Wright
@BryanDeanWright
Our foreign affairs must be strategic.

#CentralAmerica is a priority because of immigration. Illegal migrants cost us billions.

Meanwhile, all focus must be on containing the Communist #China threat. Where that involves alliances w/ poor nations, aid must be rendered.

The plan for #CentralAmerica is being retooled by WH’s John Kelly & DHS. (reut.rs/2JVEIzy)

I believe a further step is needed w/ a stabilization force, built with a coalition of Latin American nations.

Meanwhile, let’s beef up our border (fence/wall/tech solutions).
But the #CentralAmerica plan is medium to long term. What about right now?

First, let’s stop with the Nazi talk. It’s factually wrong, morally repugnant & does nothing to solve the problem.

Next, Congress needs to get off their butts & send Trump an #ImmigrationReform bill.
Read 4 tweets

Abp. José H. Gomez
@ArchbishopGomez
Friends, the law is a teacher and so is the way we enforce our laws. So what lessons are we teaching at our nation’s southern border? The pictures are dramatic and they fill you with sadness and anger. #ImmigrationCrisis #ZeroTolerance
Immigrant children — some barely old enough to walk, some infants still in their mothers’ arms — being torn away from their undocumented parents as they try to cross the border. More than 2,000 children have been seized by border authorities in the last six weeks alone.
Adding to the cruelty, in the large warehouses being used as child internment camps, strange rules have been imposed that prevent shelter workers from touching or holding the little children to comfort them. #ImmigrationCrisis #ZeroTolerance
Read 22 tweets

Matt Cameron 🗽
@matt_cam
The horrific #Goodlatte #immigration bill soon up for debate isn't something to be "compromised" with. It's a harsh, intentional, irrevocable shift Trumpward.

Scatter them upon the Antarctic plains.

Here are just a few of many reasons.

(1) CRIMINALIZATION of unlawful presence in the United States: White supremacy writ into law. For past 228 years, simply *being in U.S.* w/o permission was a civil offense w/no consequence other than deportation.
(NB: This was quickly rejected in 2005, but much more likely now)

Even @Heritage, which otherwise mostly likes the bill, balked at this as "hard to justify." You don't say.

Lionel🇺🇸
@LionelMedia
Pay attention to this. This is not just a UK problem, this is something that is going to affect the entire world. And the next time I hear someone extol the virtues of multicultural whatever in my country, I will commend to them this passage.
This isn’t assimilation or heterogeneity or a celebration of diversity. Those terms refer to something that is not the case before us now. Do not insult my intelligence or our friendship by suggesting that I don’t understand the difference between invasion and legal assimilation.
#Globalist Beta Test #UK's Own #PedoGate: Epicenter of #Immigration Horrors & #Press #Freedoms Quashed [VIDEO]#LionelNation🇺🇸 #MAGA @realDonaldTrump #FreeTommyRobinson #UKFascism #FreedomOfSpeech #ImmigrationReform #Tommy
Read 3 tweets

Leia
@TheSWPrincess
This is Trump's Amerikkka. This is a perfect example of why Trump's outrageous #racist statements are NOT DISTRACTIONS.

This is how the @CPB agents treat KIDS they think of as #animals. 1/3 #FridayFeeling #Immigrants #abused #dehumanization

Wednesday the @ACLU published a report of instances of abuse against UNACCOMPANIED MINORS from 5 yrs of DHS security documents.

The Trump admin announced recently that they plan to separate ALL minors from their parents to discourage families from attempting to enter the US w/out documentation, even those who want to request #Amnesty. #immigrationreform #CBP #ICENazis
📰goo.gl/U3vaiU
Read 4 tweets

Leia
@TheSWPrincess
I've talked before about Russian #disinformation, and how the goal is to exploit existing divisive issues to weaken the enemy. 1 #InformationWarfare #WednesdayWisdom #CambridgeAnalytica #Russie #Putin #deza

Bernie v. Hillary, Benghazi & the "email scandal" were perfect targets. There was already tension & division on those topics, so they were easy to exploit. 2

Hassan Ahmad
@HMAesq
First, what about Mexico? Holding you to it, #DonTheCon.

Second, @wwwCISorg was forged in a white nationalist lab. I know they're your base, but they've got you eating out of their hand. I thought you didn't answer to anybody.

The border is 1954 miles long. 630 miles already have a wall. There are also natural barriers such as rivers and inhospitable desert. There are also virtual walls with sensors and active patrol.

No border agency has asked for a wall. It's expensive. It won't work.
Environmental, structural, and eminent domain concerns mean the cost estimates of such a wall are likely to spiral out of control.

Those who think illegal immigration costs money should be the first to speak out against the cost of the wall. It's the most expensive option.
Read 9 tweets

Steve Herman
@W7VOA
“We saw strangers shielding strangers from a hail of gunfire on the Las Vegas strip.” 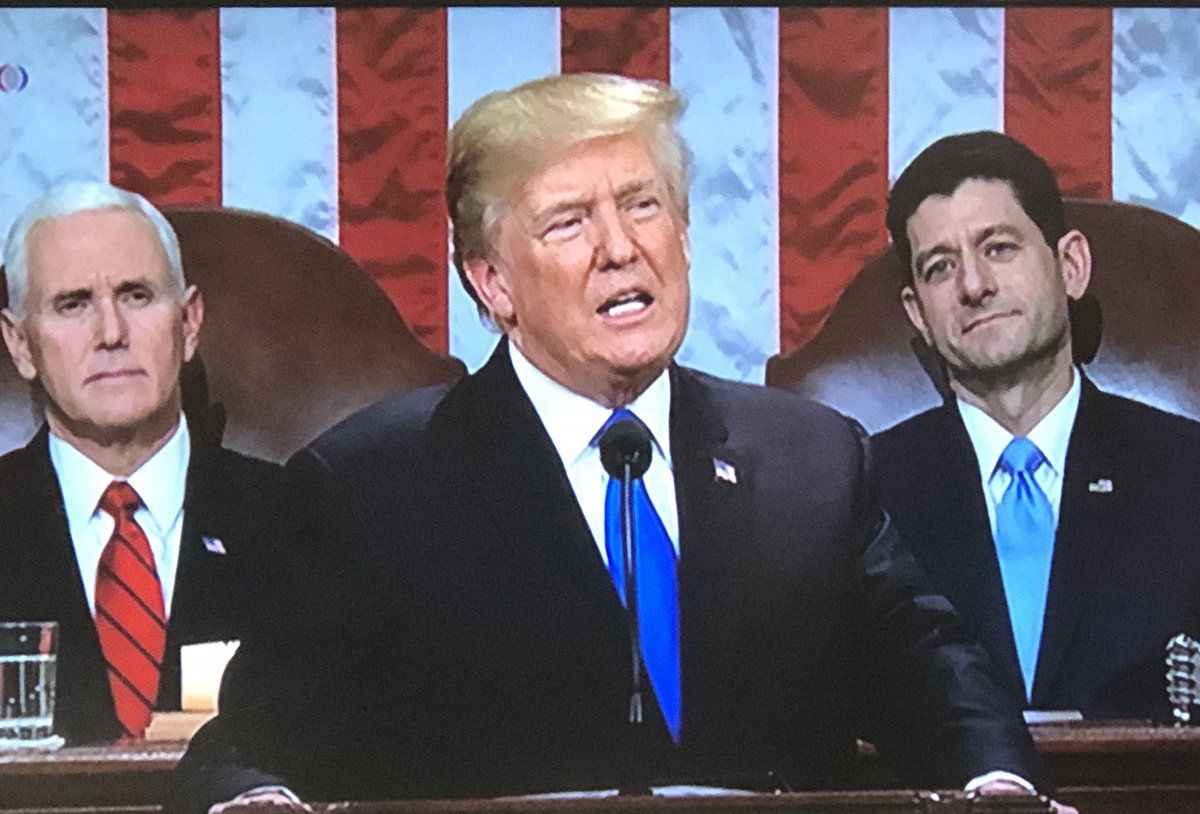 “To everyone still recovering in Texas, Florida, Louisiana, Puerto Rico, the Virgin Islands, California, everywhere -- we are with you, we love you, and we will always pull through together.”
“With us tonight is one of the toughest people ever to serve in this House -- a guy who took a bullet, almost died, and was back to work 3 & a half months later: the legend from Louisiana, Congressman Steve Scalise.”
Read 45 tweets