Discover and read the best of Twitter Threads about #MUFC

Swiss Ramble
@SwissRamble
#RealMadrid 2017/18 accounts cover a season when they finished third in La Liga, but won the Champions League for a third consecutive year, the fourth time in 5 years, plus the Club World Cup and European and Spanish Super Cups. Some thoughts in the following thread.
#RealMadrid profit before tax increased by €17m from €26m to €43m (profit after tax up €10m from €21m to €31m). Revenue (Madrid’s definition) rose 11% (€76m), their largest rise since 2000, to a record high of €751m, while profit on player sales was 4% (€2m) up at €54m.

Swiss Ramble
@SwissRamble
Manchester United are the second Premier League club after #MCFC to publish 2017/18 financial results, covering a season when they were runners-up in the league and FA Cup, but were eliminated by Sevilla in the Champions League last 16. Some thoughts in the following thread #MUFC
#MUFC profit before tax down from £57m to £26m, mainly due to higher player costs, as wage bill shot up £32m and player amortisation rose £14m, while revenue only up £9m. Tax bill increased from £17m to £63m as a change in US corporate tax rate led to a £49m non-cash write-off.

Swiss Ramble
@SwissRamble
Ten years after Sheikh Mansour acquired the club, Manchester City’s 2017/18 financial results covered a season when they won the Premier League in some style, won the League Cup and reached the Champions League quarter-finals. Some thoughts in the following thread #MCFC
#MCFC profit before tax up from £0.1m (£1.1m after tax) to £10.4m, as previous season was adversely impacted by change in year-end resulting in an extra month’s costs with minimal revenue uplift. Revenue rose £27m (6%) to £500.5m, only second English club above £0.5 bln.

Swiss Ramble
@SwissRamble
As talk intensifies of a potential move of Arsenal’s chief executive, Ivan Gazidis, to Milan, I thought it would be interesting to look at how the club’s financials have developed since he arrived in January 2009. Some thoughts in the following thread #AFC #Milan #ACMilan
#AFC revenue has grown by an impressive £198m under Gazidis, only outpaced by #MCFC £366m & #MUFC £303m in absolute terms. However, this was the 2nd smallest % growth of Big 6. Furthermore, 2017/18 revenue is likely to be £40-50m lower, due to not qualifying for Champions League.

Analysing #AFC £198m revenue growth under Gazidis, most (£125m) is from TV, due to central Premier League deals. As Warren Buffett said, “a rising tide lifts all boats”. Commercial up £69m, but this was a slam dunk after long-term sponsorships linked to stadium funding expired.

Swiss Ramble
@SwissRamble
Although the 2016/17 financial results for the Premier League are now a season out-of-date, they are still the most recent published by the clubs, so I thought some comparisons might be interesting as we head into the 2017/18 season. Thread follows.
Thanks to a combination of the PL TV deal and FFP wage controls, almost all clubs are now profitable with only #SAFC reporting a loss. #LCFC led the way with £92m profit before tax, the highest ever made in the Premier League, followed by #THFC £58m, #MUFC £57m and #AFC £45m.

Profit on player sales is an increasingly important element in driving the improved profitability of some Premier League clubs. In 2016/17 highest profits were made by Chelsea £69m (Oscar to Shanghai SIPG), Everton £52m (Stones to #MCFC) and Southampton £42m (Mané to #LFC).

Swiss Ramble
@SwissRamble
Middlesbrough’s 2016/17 financial results covered their first season back in the Premier League since 2008/09, but it ended in disappointment with relegation to the Championship and the dismissal of manager Aitor Karanka in March. Some thoughts in the following thread #Boro
Following promotion to Premier League #Boro converted pre-tax £32.0m loss to £6.9m profit, as revenue increased by £100m to a record £121m and profit on player sales was up £7m to £11m. After tax, profit was £11.5m, compared to £25.9m loss in 15/16, thanks to a £4.6m tax credit.

First of all managers on the whole get sacked due to results not style of play, Moyes & LvG got sacked because they never achieved champions league football, that’s the truth of
The matter .. nothing to do with style of play

When Jose got the job he’d have been given a minimum requirement that he needed to get us in the champions league,which he’s achieved in both seasons,while also delivering some silverware. So regardless of the style of football he’s
Playing,the only thing the board are interested in is getting into the champions league,because Old Trafford will sell out regardless if me you or your mate renews our season tickets.

Jose Mourinho’s got to get us established again after the Moyes & LvG reigns at the helm, once
Read 9 tweets

Swiss Ramble
@SwissRamble
Tottenham Hotspur’s 2016/17 financial results covered the club’s last season at the old White Hart Lane, when they finished 2nd in the Premier League, played in the Champions League and reached the FA Cup semi-finals. Some thoughts in the following thread #THFC
#THFC profit before tax improved by £20m from £38m to £58m with revenue rising by 46% (£97m) to a record £306m and profit on player sales up £13m to £40m. Profit after tax “only” increased by £8m from £33m to £41m, as tax charge was £11m higher at £17m.

Swiss Ramble
@SwissRamble
Burnley’s 2016/17 financial results covered a season when they finished 16th in the Premier League, thus securing consecutive seasons in the top flight for the first time since 1974, having been promoted from the Championship in 2015/16. Some thoughts follow #BurnleyFC
Following promotion to the Premier League #BurnleyFC converted a pre-tax £4.8m loss to £27.3m profit, as revenue tripled from £40m to a record £121m, though profit on player sales was down £11m to £1.3m. After tax, the club made a £22.2m profit, compared to a £3.7m loss in 15/16.

Swiss Ramble
@SwissRamble
Liverpool’s 2016/17 financial results included their highest ever revenue, despite not playing in Europe, though they finished 4th in the Premier League and reached the semi-finals of the EFL Cup. Some thoughts in the following thread #LFC
#LFC converted £20m loss before tax to £40m profit with revenue growing by 21% (£62m) to a record £364m, though profit on player sales was down £4m at £38m (mainly Christian Benteke, Jordon Ibe, Joe Allen & Martin Skrtel), as no repeat of Raheem Sterling’s big money sale to City.

#LFC revenue was driven by the new Premier League TV deal, though partly offset by no Europa League money, with a net increase in broadcasting income of £31m to £154m. The expanded Main Stand saw match day rise £11m to £74m, while commercial was up £21m to £136m.

Swiss Ramble
@SwissRamble
West Ham’s 2016/17 financial results covered their first season in the new London Stadium. Despite dropping to 11th place in the Premier League, they reported record revenue and profit. Some thoughts in the following thread #WHUFC
#WHUFC improved the bottom line by £48m, as they converted a £5m loss to £43m profit with revenue growing by 29% (£41m) to £183m. Profit on player sales was up £24m, mainly due to transfers of Dimitri Payet to Marseille and James Tomkins to Crystal Palace.

Swiss Ramble
@SwissRamble
Arsenal this week announced their financial results for the first half of the 2017/18 season, reflecting the impact of competing in the Europa League instead of the Champions League plus continuing investment in the playing squad. Some thoughts in the following thread #AFC
#AFC profit before tax almost doubled from £13m to £25m, though a substantial 71% reduction in (cash) operating profit from £56m to £16m was compensated by a surge in profits from player sales from £6m to £58m (Oxlade-Chamberlain, Szczesny, Gabriel and Gibbs in the summer). 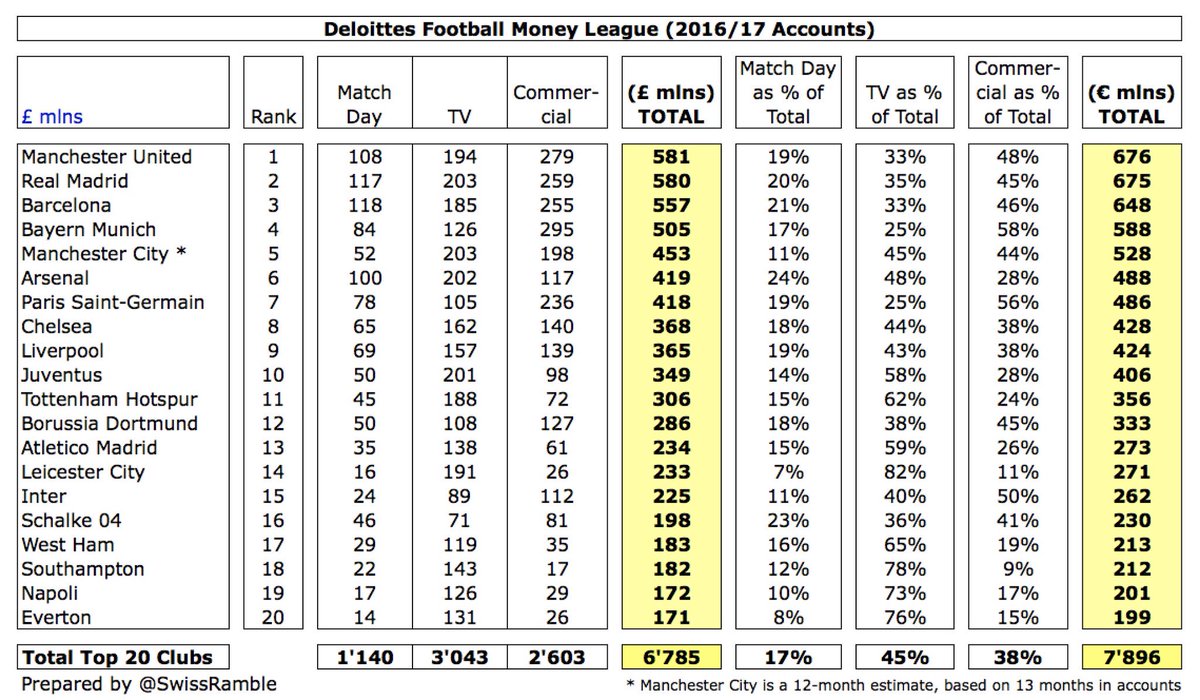 There are no fewer than six English clubs in the top eleven, also including Chelsea £368m, Liverpool £365m and Tottenham £306m. Southampton, Napoli and Everton were new entrants to the top 20, replacing Roma, Milan and Zenit Saint Petersburg. 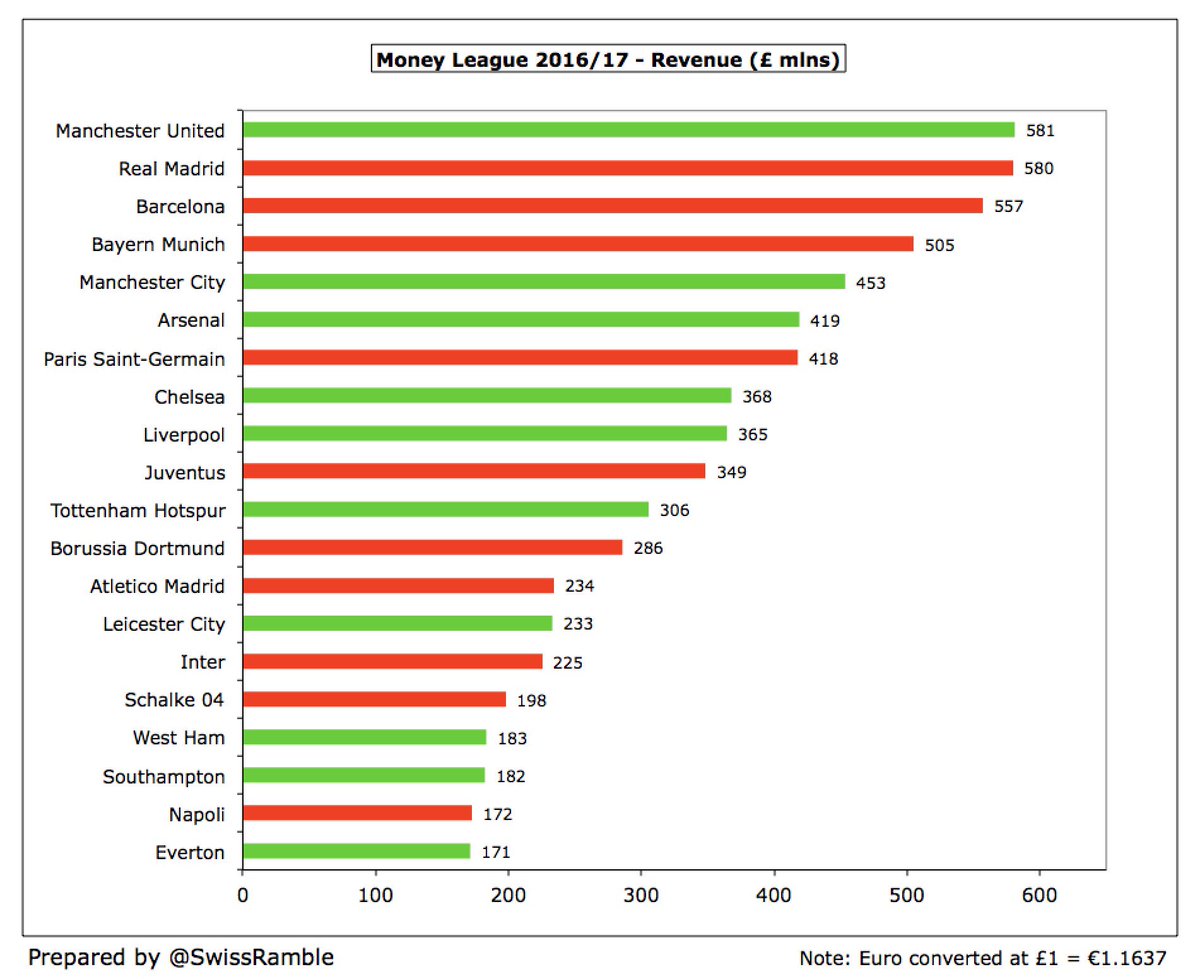 #FCBayern profit increase largely due to player sales, up €18m to €53m (Götze and Rode to Dortmund, Hojbjerg to Southampton), while player amortisation also fell €8m.

Dave Phillips
@lovefutebol
Lots of tweets with "FSG only interested in profit". If so, they're not very good at it. +£20m losses in 4 of 6 FYs since #lfc takeover.
The more serious point is that they're interested in #lfc as a long-term investment and (a) that's not a surprise and (b) isn't a problem.
There are now very few, if no people/investment groups who buy top-flight football clubs with simply pure and noble sporting objectives.
Read 71 tweets