Discover and read the best of Twitter Threads about #believewomen

PDX Selina
@SelinaDavis73
Problem w #SusanCollins's evidentiary standard for sex assault claims - in vast majority of cases, only two are present. In many older cases, there isn't contemporaneous corroborating testimony, just friends, family, therapists who can attest as to when vic first disclosed. 1/

#BelieveWomen is trite, unconstitutional nonsense. We can't simply believe everything every woman claims now becs women & girls' reports too often haven't been taken seriously. We just need to take reports seriously. Which requires investigation in order to build a case vs perp 2
We need to safeguard due process, becs each of us will need it if/when we're accused of violating a law. And no, a mere allegation, w/out more, can't be enough to find guilt. Some people make false claims for malicious purpose. It happens. 3/
Read 41 tweets

Lisa Sharon Harper
@lisasharper
People ask what #patriarchy is. Think “Jim Crow” and apply it to women—all women. It’s a web of systems, structures, practices and believes that enforce gender hierarchy and silence women. 1/
#This is what #patriarchy looks like in the US right now. 2/

And #patriarchy looks like #this. Yesterday, .@OrrinHatch refused to listen to women and their concerns. 3/
washingtonpost.com/politics/2018/…
Read 20 tweets

Jewhadi™
@JewhadiTM
Conservative Women Will Make Dems Pay For Kavanaugh In November thefederalist.com/2018/10/04/con…
Democrats assumed Republican women would play into their identity politics instead of seeking truth, and that assumption is blowing up in their faces.
Many conservative women see an eminently qualified Supreme Court nominee standing his ground, while duly elected members of the Senate attempt to destroy his life and prevent him from serving on the nation’s highest court.
Read 10 tweets

hilzoy
@hilzoy
1/ Reading this piece was a total waste of time, except that it prompted me to try to check out something I've been curious about: are there, in fact, a substantial number of progressives who say that we should believe ALL women?

2/ My normal operating assumption is that there is not view so stupid that you can't find SOMEONE who holds it, so I assume that there are people who believe this one. But *lots* of them?
3/ I checked out the hashtag #BelieveAllWomen . It's almost entirely people on the right, being sarcastic. Random example:

The correlation between The Crucible by Arthur Miller and what is happening with the #KavanaughHearing today is undeniable:
We begin with Abigail Williams. She is the clear villain of the play. She accuses those who she believes have wronged her and her single motivation is jealousy and power. She is manipulative and has no regard for her actions. She uses those in power to get what she wants:
Accusing those in the village. Those accused have two options, to be hanged or to admit that they are guilty. Abigail knows this.

Abigail Williams represents the Democrats who wish to bring down Kavanaugh with whatever they can...
Read 11 tweets

Gustavo Luis
@verygooster
every woman in this pic tho

Let's spin Bretty K's baggage into good
1) #BelieveWomen
2) Donate to groups if you can! hellogiggles.com/news/15-organi…
3) I have no plugs but if you're a comic book person give my friends Jenna & Lisa's channel a look because they're two of the good ones youtube.com/alchemss
Also I see I gained followers and I swear I TRY to keep it leveled and whatever but you are likely to see many future Yankees/NY Giants tweets so don't blame you if you're like "nah i'm good" lol
Read 4 tweets

At the risk of repeating myself—
1. I speak only for me.
2. I support victims.
3. We don’t hang people based on accusations.
4. Mob thinking helps no one.
5. We have to be willing to be wrong.

2) We are all human and make mistakes. Example: I spelled Dr. Ford’s maiden name wrong. It is Blasey, not Blaseley.

3) My instinctive response to the Julie Swetnick allegation is skepticism.
Read 73 tweets

Mangy Jay
@magi_jay
1/ This Op-Ed by Bret Stephens is intellectually flaccid, at best, and morally reprehensible, at worst.

It’s written as a superficial appeal to our “reason,” while, in fact, Stephens repeatedly argues that we behave in a fundamentally irrational manner. nyti.ms/2zngCL0

2/ First, let’s just talk about how flawed Stephens’ “argument” is. . . . .
3/ Basically, Stephens is arguing that, in the absence of *specific* corroborating evidence as to an event, we must give *equal* weight to two people’s claims regarding the nature of that event: in this case, an alleged sexual assault.

🏳️‍🌈Lisa Talmadge 🔥
@LisaTalmadge
I’m on the 🚂 to philly heading to the sentencing of the most infamous rapist of all time Bill #Cosby.

We are hoping to see this criminal walk out in shackles for his 45year+ depraved crime spree of drugging and raping over 60 women.

Watch this space for pics and updates!
#SentenceCosby30years

Graphics by @FrancescaRizzo Part of a 4 year digital campaign to raise awareness of the names of the human victims of #Cosby’s 45 year drug and rape crime spree.

No one knows all of these survivors’ names.

They aren’t famous, they didn’t “cash in”
By being raped.

Michele
@my_dys
The ironic thing about being the victim of sexual assault, is what you remember. You spend years trying to erase it from your memory, and no matter what you do...the memories always comes back.
I was sexually assaulted the first time when I was 8 yo. A 10 yo boy tried to have sex with me. He laid on top of me and he tried to insert his flaccid penis into my vagina. It didn't work, and because it didn't work, I learned for the first time something was "wrong with me".
It felt dirty. I can still easily recall the feelings of embarrassment, horror, and blame...I was 8.
Read 15 tweets

Keiko
@keikoinboston
1. Smart piece from @kittypurrzog on the problems with #BelieveWomen. What happens when the women are the perpetrators, not the victims?

@kittypurrzog 2. This seems like such an obvious statement but so many women think we should dispense with evidence when women are the alleged victims and men, the perpetrators.

“...we should reserve judgment and look for evidence.”

Not so when the tables are turned.

@kittypurrzog 3. Prof. Avita Ronell’s case at NYU has been bizarre. Judith Butler just published this letter about her regrets over the letter of support that she helped to organize on Ronell’s behalf.

Owen Ellickson
@onlxn
the coordinated push to rehabilitate Chris Hardwick is one of the scummiest things I've ever seen. let's just quickly review
this is Dykstra's essay. definitely merits a trigger warning, but if you're okay w/ that I'd recommend reading it. it's disturbing and detailed and concrete and coherent. notably Dykstra takes pains to point out mistakes SHE made as well medium.com/@skydart/rose-…
we can caveat things all we like: memories can be faulty, people can exaggerate certain details, etc. but on a basic level you either believe Dysktra's claim that Hardwick was a cruel and abusive boyfriend or you don't. if you don't, here's what you have to believe:
Read 11 tweets

Caroline O.
@RVAwonk
I'd encourage everyone to read @brianbeutler's article from Nov. before drawing any conclusions about Al Franken. Don't believe what you *want* to believe. Believe what the evidence shows.

And if there's no evidence, don't believe it.

crooked.com/article/breitb…
I can't think of a better way to undermine the #BelieveWomen & #MeToo movements than by getting progressives to insist that Al Franken's 8 accusers are all lying.

But surely, alt-right rat-f*ckers would never try to do that, right? 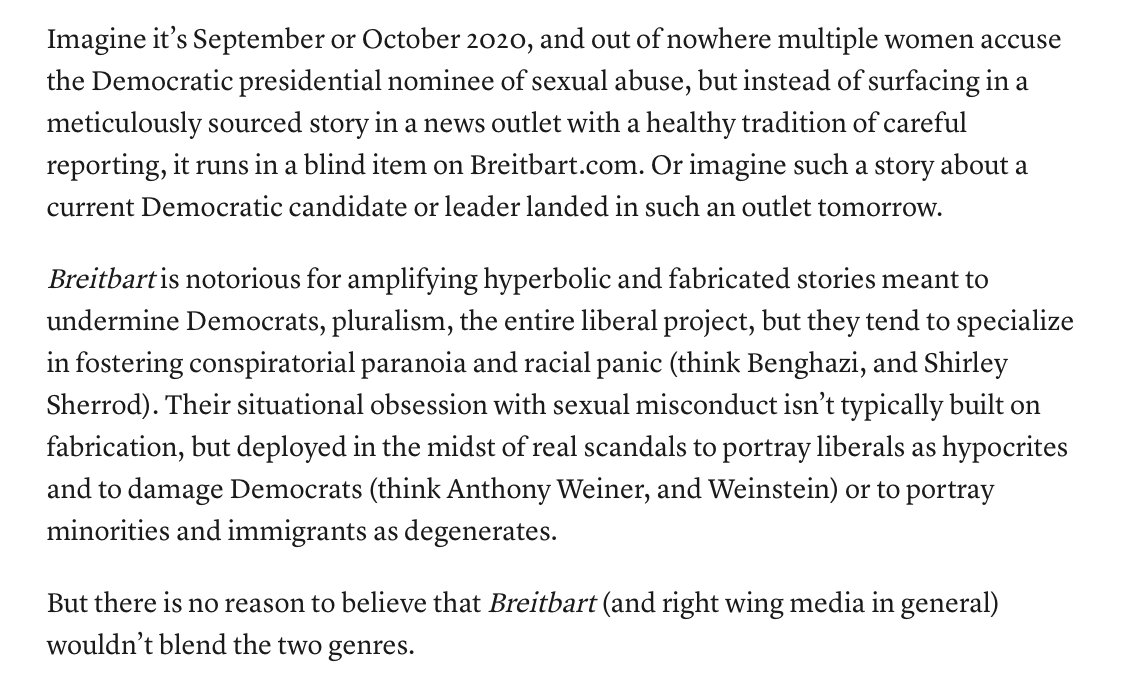 And I can't think of a better way to delegitimize the very real problems of social media manipulation & Russian influence operations than to get people to tout unfounded claims about "bots" ruining Al Franken's career, so those claims can later be publicly refuted.
Read 3 tweets

THE Princess 👑🌌
@TheSWPrincess
Most men that I know, men who respect women as equals, are shocked when allegations come out about people like #HarveyWeinstein, #BillCosby, #LouisCK. They are in shock when men they know are accused of sexually harassing or assaulting women. THREAD 1 #BelieveWomen #RWU #MeToo

Some men find it very hard to believe that these things are so common, because they would never DO those things. If I were a man and I hadn’t experienced harassment and inappropriate behavior multiple times, I would probably find it difficult to believe. 2 #MeToo #BelieveHer
I decided to share about what I’ve experienced, so that good men who respect women can start to understand that these things happen to women know they know, work with, are related to, and love, every day. Their friends, neighbors, coworkers, relatives. 3 #sexualharassment

THE Princess 👑🌌
@TheSWPrincess
Alabama state auditor Jim Ziegler defended Roy Moore not by denying the allegations against him, but by pointing out that Mary, Jesus' mother, was a teenager. THREAD 1 #metoo #believewomen #predator #believeher
time.com/5017940/roy-mo…

Yes. He compared a man in his 30's pursuing girls ranging in age from 14 to 18 to Joseph, husband of Mary. 2 #statutory #hypocrasy #privilege #itsillegal

The actions below are a Class A #misdemeanor in Alabama: sexual abuse, first degree - #statutory if someone 19 or older subjects another person to sexual contact who is over age 12 but younger than 16. 3
ageofconsent.net/laws/alabama/s…